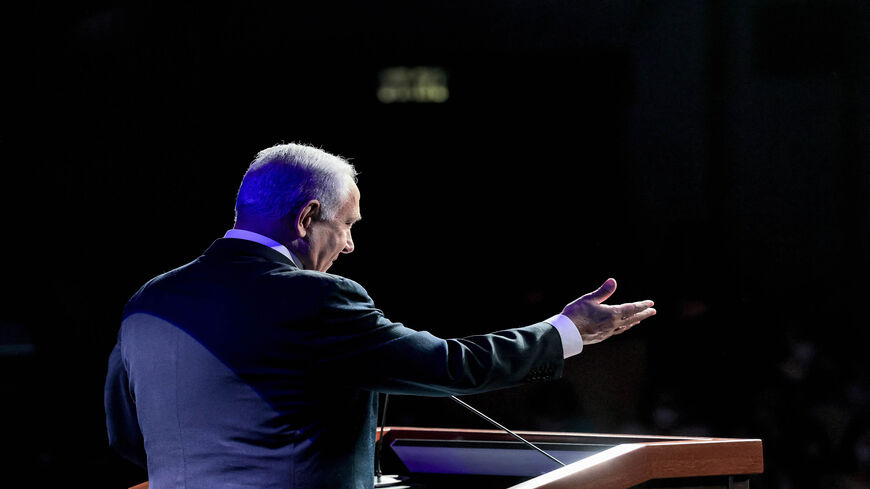 From a luxurious office suite that he rents in one of Herzliya Pituach’s most prestigious towers, former Prime Minister Benjamin Netanyahu is plotting his return to power. Next September, he will celebrate his 72nd birthday, but he is harder at work than ever, with just one goal in mind. He is committed to taking back the office of prime minister, which he believes was stolen from him in a public and political scam.

It hasn’t even been two months since Netanyahu ceded the prime minister’s office to Naftali Bennett, but he can already chalk up several minor victories against his successor and mortal enemy. These may not have practical significance, at least not immediately, but they are still extremely important to his efforts to establish himself as an alternative to the current government.

On July 29, Israel learned that Netanyahu’s campaign against the “failed” government’s handling of the coronavirus pandemic is beginning to bear fruit. With the fourth wave of the virus spreading at an alarming rate, Bennett announced on primetime TV that evening that Israel would be the first country in the world to enable seniors over the age of 60 to receive a third shot of the vaccine.

As leader of the opposition, Netanyahu would never allow Bennett to be the sole center of attention, so an hour before the prime minister’s big announcement, Netanyahu put together a video clip of his own, reminding the public that he had already called for a third vaccination shot several weeks ago. “The government wasted precious time bringing the third vaccine. For six weeks now, I have been calling on them to bring to Israel the vaccines we have already ordered. For long weeks they did nothing. It’s a failure that resulted in the loss of human life. Now one thing needs to be done — go get vaccinated right away,” he said.

The video, which was immediately disseminated to Netanyahu’s millions of followers across social media, had just one purpose: It was intended to ruin Bennett’s big “leadership moment” and show Israelis how much better Netanyahu was at the job. The subtext of his message was that Bennett is only now doing what Netanyahu wanted to do weeks ago.

No less interesting was the location, where the video was shot: an open-air convention space (because of the coronavirus) in the southern town of Dimona. Not only is the town a major bastion of the Likud, it also has a large population of Moroccan immigrants and their families. He chose Dimona to highlight the peace agreement with Morocco — and all the other historic agreements he reached — with the Arab states.

The truth is that in the last few elections, the Likud party began showing signs of weakness even in those towns most identified with the party, including Dimona. Even the Netanyahu brand seemed to be losing momentum there. That's why Netanyahu himself decided to pay Dimona a visit, and why he will continue to go there and to other towns closely identified with him. While no one knows when the next election will be, when it finally does arrive, Netanyahu will be ready.

In fact, he is following a carefully orchestrated schedule of visits to all the Likud strongholds. They are places where people still refer to him as prime minister and are anxious to see him back in office. They certainly do not identify in any way with the current government. For these hardcore Likud supporters, the Bennett government is “detached,” “elitist” and even “illegitimate.” While Prime Minister Bennett himself is nothing more than a “conman.”

There is no doubt that Netanyahu is the most effective shadow prime minister that Israel has ever seen, and not only because he spent so many years as the actual prime minister. The real reason is that even after he was voted out of office, he still had a huge base of supporters that continued to admire him and would never abandon him. That's why he has been able to stay so far ahead of the current prime minister in all of the recent polls.

This was evident in the results of a poll released by Channel 12 on July 29. When asked which prime minister handled the coronavirus pandemic better, the respondents placed Netanyahu far ahead of Bennett. Some 43% of respondents said that Netanyahu handled the pandemic better, while just 21% said that Bennett did a better job. This was bad news for Bennett but great news for Netanyahu, who was quick to share the results on social media.

As far as Netanyahu is concerned, his first and most important priority is to remain in the public’s eye after leaving the prime minister’s office. That's why he refused to take a single day off. Within an hour after leaving the prime minister’s office, he was already settled in his new office in the Knesset as chairman of the opposition. Since then, he has been one of the Knesset’s hardest working members. The electronic boards at the entrance to the plenum show that since the new government was inaugurated, he has almost always been there, even in those late-night sessions that extend until the early morning hours. At one point, he was actually the only Knesset member in the building.

It may be madness, but there is method to it. Netanyahu wants to prove to the other Knesset members in the Likud that he is working as hard as ever. In other words, he is signaling to them that he has no plans to resign. As a strategy, it has proven itself effective. If there was any murmuring in the Likud that the time had come to replace Netanyahu, it has since died down and disappeared.

But there is also another reason behind his extreme diligence. Netanyahu realizes that the Likud isn’t the only party to scrutinize his every move in order to assess his strength. The other parties in the right-wing ultra-Orthodox bloc are doing the same thing. As long as he manages to lead that bloc as a consolidated and combative opposition, he is signaling to the coalition that no one from the opposition is even considering strengthening the new government by defecting to its ranks.

Over the last few weeks, Netanyahu has physically led the opposition’s hard-fought struggles in the Knesset during what has become known as the “white nights.” They have resorted to every parliamentary tactic, including filibusters, hundreds of amendments and frequent late-night speeches. On more than one occasion, the lights in the Knesset stayed on all night, and Knesset members and ministers slept in their offices, just to be present in case a sudden vote was called. Netanyahu would show up in the plenum with a book — usually in English — in hand, and spend his time between reading leisurely and enjoying the show, as the fragile, often feuding coalition got jostled about by a combative opposition.

Nevertheless, Netanyahu also knows that there is no election on the horizon, and the current, eclectic coalition can survive for quite a while, if only because none of its members wants an election anytime soon. Bennett certainly doesn’t. After forming a coalition with Ra’am and the left, he lost just about all of his own right-wing electorate.

Still, Netanyahu will not give up so easily. “Elections happen suddenly,” was a mantra that he repeated incessantly to his aides during his second stint in the opposition (2006-2009). With that, he would remind them that they need to be ready for a lightning election at any given moment. It is the same strategy that Netanyahu has adopted now, during his third stint in the opposition.