Trying to please all components of his coalition, Prime Minister Naftali Bennett now heads a government that is too large, too spread out and too geared on compromises. 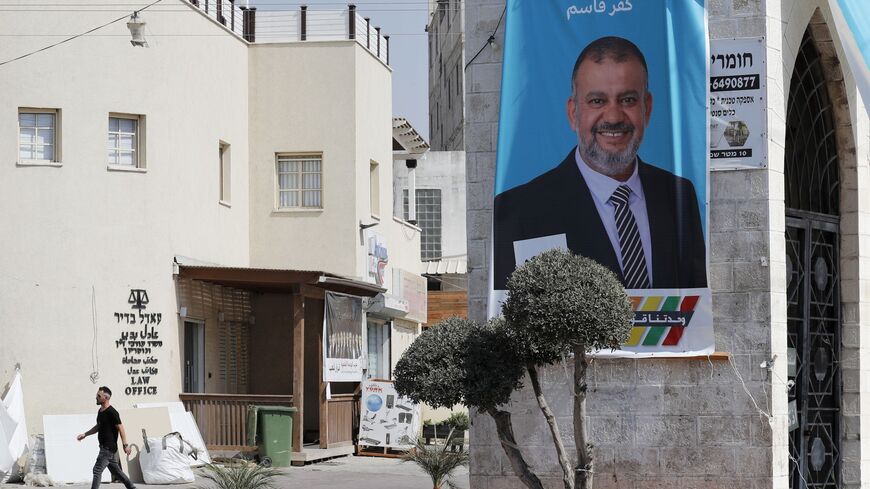 An Arabic-language election banner displaying a portrait of Arab Israeli candidate Waleed Taha is pictured in the Israeli town of Kfar Qassem, on Sept. 18, 2019. - AHMAD GHARABLI/AFP via Getty Images

Prime Minister Naftali Bennett was in a good mood when he arrived at his office July 11. Israel’s top political commentators were effusive in their praise about the way he was functioning in his new office. They commended him for his secret meeting with Jordan’s King Abdullah, which was first revealed to the public July 8, and noted how it signaled a warming of the relationship between the two countries. Bennett could also chalk up a victory for the way he boosted the coronavirus vaccine supply from Pfizer after clinching a deal with Pfizer CEO Albert Burla the night before. This was especially significant, given how former Prime Minister Benjamin Netanyahu used to boast about his good relationship with Burla, and how that enabled Israel to become the first country in the world to achieve mass vaccination.

All in all, everything seemed to be working out. Bennett was finally breaking away from the ominous shadow of his predecessor. Then reality hit him in the face. Suddenly he was forced to contend with his new government. Once it was stripped of all the glittery packaging, the coalition turned out to be much more complicated than he imagined, and far less stable too.

A single tweet by Ra’am party Knesset member Waleed Taha set Bennett and his team into a frenzy. “I informed the coalition that Ra’am’s Knesset delegation will not participate in committee meeting discussions and will not vote on legislation in the plenum until further notice!” said Taha, who chairs the party's Knesset faction. This was a very public warning that showed that listing his party's grievances behind closed doors would not suffice.

The background behind Ra’am’s growing rage was how the coalition was treating the party. Most of all, it was annoyed by the way the government had been approaching the opposition, particularly the Arab Joint List, asking for it to provide a political safety net in exchange for benefits for Arab society. Ra’am and the Joint List are bitter rivals within the Arab sector. There has been a lot of bad blood between them since Ra’am broke away from the Joint List right before the last election. Now it looked like the coalition was favoring Ra'am's rival over Ra'am itself.

Ra’am Party leader Mansour Abbas, while upset that he was expected to pay a steep price to join the coalition, did so anyway. He even voted for the Citizenship Law, even though it was a red flag for the entire Israeli Arab sector. But to his chagrin, his loyalty was not reciprocated. He did not even get precedence over his Arab rivals. Instead, the coalition was going behind his back to make deals with the Joint List, even when those deals were detrimental to Abbas' interests.

That was apparently why Abbas did not show up for a meeting that morning of the leaders of all the coalition parties. Though he explained that it conflicted with his personal schedule, the insinuation behind this was obvious to everyone. At the same time, Abbas placed an ultimatum on Bennett’s desk: Either transfer the Bedouin Administration from the Prime Minister’s Office to the Ministry of Welfare that same day or Ra’am’s four party members would absent themselves from further Knesset votes.

The issue at stake was a demand Ra’am made — and received — during the coalition negotiations. The Bedouins of the Negev form a large part of the party's base, and the transfer of the Bedouin Administration to the Ministry of Welfare would help Ra’am when dealing with the bureaucracy. The problem, as the party saw it, was that the coalition was taking its time about carrying out this particular agreement, so Ra’am decided to use it as a test of its own strength. The party did this being fully aware that the coalition, without Ra’am's support, would cease to function. When the government has just 61 seats, every single vote is critical.

At the same time, sources in Ra’am went to the media to criticize the way the coalition was operating. We are promoting this government more than they are promoting us, they complained. We are paying a price for all that we are doing to preserve the coalition’s integrity, but we are not getting anything back in return.

Bennett took this statement with him to the coalition meeting. According to one participant, Bennett looked tense when he told his Cabinet that it needed to help him approve Ra’am’s demands immediately, or else the coalition would break apart. It took just a few hours before Abbas’ ultimatum proved effective. In a sudden move, Attorney General Avichai Mandelblit granted approval to the transfer of authority to the Welfare Ministry. This was followed by a quick telephone vote in which the Cabinet supported the move. The crisis was averted, and the coalition continued to function. For now.

While this was, ostensibly, a minor incident, it reflects the fragility of the new government, made up of seven ideologically distinct parties. As much as they are polarized, each party wields enormous power, because the government would cease to exist without any single one of them. The way Bennett scurried to appease Ra’am gives some indication of how weak he is as a prime minister, especially coming from a party with just six seats. He has no real ability to control his Cabinet or impose his authority on its ministers. He depends entirely on their support, every hour of every day.

The coalition has a hard time ahead of it. It is facing a rancorous opposition, united around former Prime Minister Benjamin Netanyahu, who heads the largest party, Likud, in the Knesset. Using the parliamentary tools at its disposal, the opposition has been giving the coalition the runaround with long, late-night filibuster debates intended to exhaust the government and create a new agenda. Even with its slender majority, the coalition is responding by doing everything it can to keep the coalition in check.

This includes some predatory moves never before seen in the Knesset, not even during Netanyahu’s tenure. This began with passing the Norwegian Law, which brought 30 new members into the Knesset to replace ministers and deputy ministers, at a cost of millions of shekels per year. While the law is intended to allow ministers to focus on their work by freeing them from routine parliamentary duties, its use here was excessive. In the past, the leaders of the current coalition attacked the Netanyahu government for its corrupt abuse of the Norwegian Law, yet here they are using it themselves.

Furthermore, the coalition limited opposition representation in the Knesset’s committees in an extreme manner, supposedly to ease the committees’ operation. How extreme was it? Knesset legal counselor Sagit Afik was critical of the decision, saying, “I believe it to be problematic. The number of Likud members in certain committees is sparse. It is particularly evident because it is so unusual. If it was up to us, we would suggest that it be changed. We would also suggest a change to the number of committee chairs.”

There is no doubt that this kind of behavior is a solid indicator of the coalition’s infirmity. It also portends the crash of the current Knesset. Coming from a government that was supposed to heal the political system, it is especially disconcerting.

But that’s not all. Another example of the coalition’s fragility could be seen July 5. After Justice Minister Ayelet Shaked negotiated a compromise with the illegal West Bank settlement of Eviatar, in which the homes of the settlers would not be demolished and a yeshiva would be constructed on the site in exchange for the evacuation of the settlers, the coalition’s center-left parties signaled that they would oppose the agreement.

According to the leader of Meretz, Minister of Health Nitzan Horowitz, the settlement “was built on Palestinian land, which must be returned to its owners.” He then went on to say, “I oppose the establishment of a yeshiva on the site.”

Then there are the steps being taken by new Finance Minister Avigdor Liberman, leader of Yisrael Beitenu. These seem to represent his personal agenda against the ultra-Orthodox community, even while Bennett is trying to maintain open channels of communications with it.

Where is this all heading? It is now obvious to just about everyone that that the coalition will continue to flounder and suffer setbacks until the budget is approved this fall. On the other hand, if it does manage to pass a budget, it could find stability.