After being criticized by human rights groups, Health Minister Nitzan Horowitz has stopped the Shin Bet's tracking of Omicron-infected Israelis. 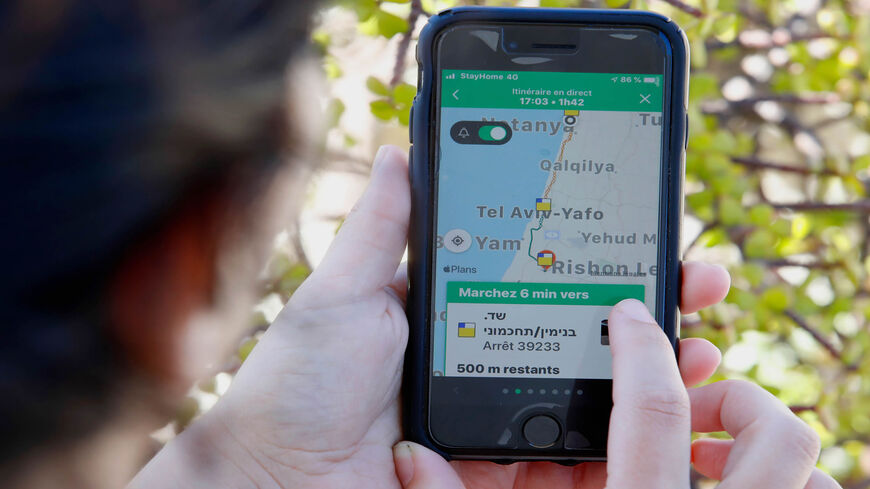 A woman checks on her cellphone the Moovit mobile transport application, Netanya, Israel, May 4, 2020. - Jack Guez/AFP via Getty Images

The Israeli government headed by pro-settler Naftali Bennett was composed by parties from both the right and the left. Nowadays, half a year after its formation, we can assess that if it falls, it will not be the fault of left-wing Meretz. They are in it to stay, even if it means paying a steep price ideologically and image-wise to keep the coalition alive.

Actually, the party has been making sacrifice after sacrifice on an almost weekly basis with that goal exactly. Historically, the party’s call to arms has been opposing the West Bank occupation, but that seems to have been put aside, at least partially. Yes, they condemn the latest plans to expand settlements. They even tweet about it. They have met with Palestinian President Mahmoud Abbas in Ramallah to discuss proposals for a two-state solution. But that’s as far as their diplomatic activity goes.

Occasionally, Meretz Knesset members Mossi Raz and Gaby Lasky make their way to the settlements to demonstrate against the occupation. They did exactly that during President Isaac Herzog’s controversial visit to the Cave of the Patriarchs Nov. 28. Raz brought a sign and shouted his protests. Lasky accused the president of granting his stamp of approval to the occupation.

Upon joining the new government, Meretz agreed that it would not push ahead with their positions on the occupation and other highly controversial issues. But things went further than that. Last week, Meretz Chairman Nitzan Horowitz, who serves as health minister, announced that he supports reinstituting the digital tracking of civilians using Shin Bet technology in an effort to block the spread of the Omicron variant of the coronavirus. People everywhere were stunned, and rightfully so.

It all dates back to the early waves of the coronavirus, back when Benjamin Netanyahu was in power. At the time, Horowitz was one of the most outspoken members of the opposition to reject the use of digital tracking on a civilian population. In March 2020, he sent an urgent letter to the attorney general demanding that his office put a stop to this chilling measure, drawn from the world of espionage. As he wrote at the time, “The tracking, locatin, and policing of civilians through the use of extensive databases and sophisticated technologies would be a serious infringement on the right to privacy and other basic civil rights. As a result, such measures should not be allowed in a democratic state. Even under the current circumstances, such invasive measures should not be used so sweepingly against countless civilians, without appropriate oversight. Similarly, clear rules for the use of any data collected should be put in place, limiting such use insofar as possible.”

Even though the vaccine was not yet available, Horowitz believed at the time that the rights of the individual supersede public health. He persisted with this approach in June 2020, when the second wave of the coronavirus began. “It is so much more than just tracking,” he said at the time. “All your movements, your meetings (including your texts and lots of other things that the Shin Bet knows how to extract), as well as those of the many thousands of people around you will be accessible to any government official! As a free citizen, I am unwilling to allow the government to invade my privacy like that.”

It was a time of political chaos. The country seemed trapped in an endless cycle of elections. The subtext of what Horowitz was saying was that Netanyahu was abusing this tool to keep track of civilians.

Less than two years have passed since then, but the times have truly changed. Ten days ago, Horowitz himself signed an order reinstituting digital tracking. He explained his sudden zigzag by saying that the Omicron variant is spreading quickly, and that digital tracking would be very limited and temporary. And there would be strict oversight, too.

Nevertheless, he was criticized severely and accused of turning his back on a banner issue so closely identified with him and his party: the protection of civil and individual rights. Still, Horowitz refused to concede. In fact, he actually led the effort to approve digital tracking in the Cabinet, even though four ministers were opposed to it. Nor did he step back when the Association for Civil Rights in Israel brought the issue before the Supreme Court. As expected, the court rejected their case, opening the door for Horowitz and Prime Minister Naftali Bennett to push ahead with legislation. The Shin Bet would now be allowed to track the phones of civilians suspected of being infected with the coronavirus.

Then there was a sudden shift.

Both the health minister and the prime minister announced that the use of digital tracking would be stopped, and that Knesset legislation would not be used to extend the state of emergency. It is now believed that the reason for this turnabout was their concern that they would not have a majority in the coalition to support the legislation in a vote, given the number of Knesset members opposed to it. Furthermore, they realized that the Omicron variant panic had been exaggerated. A wave of new infections has not spread across the country.

By the end of this episode, Horowitz’s public image was battered and bruised. Furthermore, Israelis began to lose trust in the country’s leadership during a pandemic, when public trust is an invaluable commodity. Horowitz tweeted, “From the very first moment, I stressed that the use of this tool would be limited and for a very short time — just a few days — so that we can gain the urgent information needed to block infection by this new and unknown variant. That’s exactly what he we did.”

He went on, “We are ending it now. In addition to protecting public health, we must stand vigilant over the right to privacy and individual rights, even in times of emergency.”

The problem is that even this explanation will not be enough to erase the ease with which he himself signed regulations to track civilians, even if it was for just a few days. Horowitz looks like he acted rashly, while turning his back to the very core of his existence as a politician. After all, he first became famous because of his uncompromising battles for civil rights. He also hurt his party Meretz, by stripping it of its core ideology.

Based on this incident, it is easy to understand the position of the Meretz party leadership and the party chairman in particular about remaining in the coalition. Meretz will be willing to swallow more bile and turn its back on its promises and agenda in just about every area, as long as the current government remains intact.

Meretz has three ministers in the coalition: Horowitz is minister of health, Tamar Zandberg is minister of environmental affairs and Essawi Frej is minister of regional cooperation. Anyone who meets them immediately discerns the passion for action in their eyes. They exude a tangible sense of excitement from being in positions of power, where they can influence policy. For two decades, Meretz was an opposition party, fighting for its place and often for its very existence. During all that time, however, it refused to give up its ideology just to serve in the government. Its return to the centers of power and the realization that if this government falls, it is unlikely that they will be able to achieve this again has a powerful impact on the party’s perspective. They frequently argue that as long as Netanyahu is in the arena, they must preserve the governing coalition, since it is the only way to keep him from returning to power.

The problems begin when they are asked what their red lines are. Will they stay in the coalition even if it comes at the expense of approving more moves that run counter to their worldview? The answer to this question, at least in part, can be found in remarks made by one of Meretz’s ministers to Al-Monitor just last week, who said on condition of anonymity, “This government will last four years. We will not be the reason that it falls apart.”