With two cases of the Omicron variant detected in Israel, Prime Minister Naftali Bennett is confronted with an array of political problems. 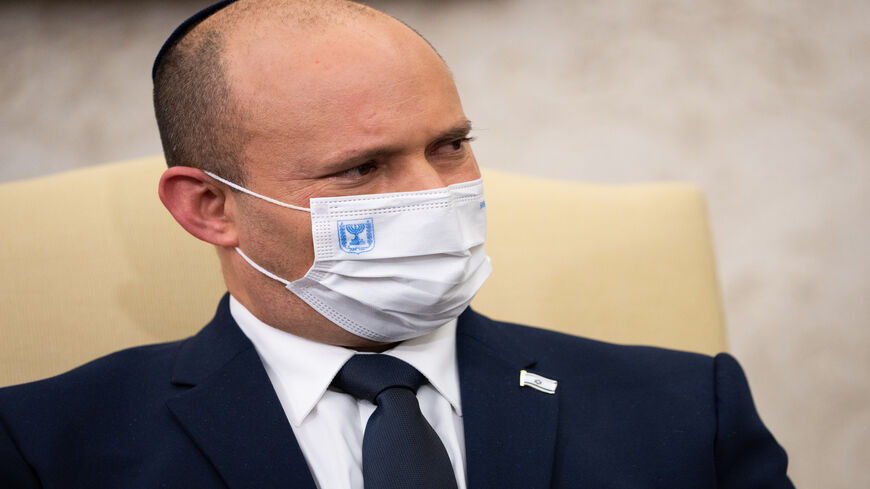 It was an unusual press conference for a Friday afternoon, just before the start of the Sabbath Nov. 26. A stern-faced Prime Minister Naftali Bennett appeared before the cameras to announce that the Omicron variant of the coronavirus had reached Israel from South Africa and recommended that Israelis avoid flying overseas because of it.

With Health Minister Nitzan Horowitz at his side, Bennett told the public that the government was even considering shutting down Israeli airspace. In a dramatic tone, he said that the country is facing an entirely new situation with this new variant of the virus, and that it is especially worrying. Then, just a moments later, he congratulated himself on his rapid response to the situation. “The good news,” he said, “is that Israel woke up early. The first in the world. Our entire system is on alert, all our headquarters are ready and open. We won’t take risks. It is better to act quickly and decisively now, than to procrastinate with our decision-making and to wake up when Israel is already inundated with cases and entirely 'red.'”

Bennett still sounded worried at the beginning of his weekly Cabinet meeting Nov. 28. He called on Israelis to be patient and show restraint, and expressed empathy for the general population, saying, “I understand the weariness of living under the shadow of the coronavirus. It’s not easy for anyone, but it is the reality. … I know people may need to change their vacation destination or quarantine on arrival. It's happened in my family too.”

Evidently, Bennett wanted to send a message that the country was entering an emergency situation, due to the latest, unexpected development in the spread of the coronavirus. At the same time, he also wanted people to feel he has the situation under control, and that he would not hesitate to impose restrictions if necessary. If the Omicron variant of the coronavirus was the first major test of Bennett’s leadership, he seemed to be managing the crisis well.

That all changed Dec. 1, when Israelis learned that the prime minister’s wife, Gilat Bennett, had taken their four children on a family vacation overseas. Ever since the news broke, Bennett has been forced to contend with a serious media and leadership crisis, and rightfully so. Thousands of Israelis canceled their vacation plans after hearing him speak just days earlier.

Inevitably, the opposition went on the attack. The real ire, however, was reserved for travel agents. They raged about how the call to cancel vacations affected their livelihood, even though the situation may not have been justified. They told the media that following Bennett’s recommendations not to fly overseas, thousands of Israelis canceled their flights. According to the travel agents’ figures, some 30% of all flights and vacations were canceled.

Just a year earlier, as part of the opposition, Bennett waged an acrimonious battle against former Prime Minister Benjamin Netanyahu over his alleged mishandling of the coronavirus pandemic. He accused Netanyahu of deserting the public, and failing to provide a personal example. Now, Bennett was caught short, too, after failing to prevent his own family from following his public recommendations.

When this happens to a prime minister, who has always suffered from minimal support, the consequences can be dramatic. For one thing, it impacts public trust, not only in him but in his entire government. Then there are the questions this raises about his discretion and judgment, not to mention his serious failure to serve as an example. This bizarre incident with his wife was even covered by the international media, adding arms to the arsenal of Bennett’s political rivals.

Bennett’s office responded that his family’s vacation was planned well in advance, but when the country they were visiting was included on the list of “red” states, their destination was changed in accordance with the updated guidelines. Originally, the family was planning a visit to Mauritius.

But this response only made matters worse. It immediately raised the question: Why weren’t Israelis updated about these new developments?

Then, more embarrassing details started to leak out. It turned out that the prime minister’s wife refused to cancel her flight, despite repeated requests from the prime minister’s office. It seemed ridiculous. Then again, so did the government’s decision earlier this week to reinstitute the digital tracking of civilians infected with Omicron in order to prevent the spread of the variant.

Digital tracking by the Shin Bet was an extraordinary tool used by the Netanyahu government during the initial waves of the pandemic. Inevitably, it was the subject of heated debate and criticism, mostly by the opposition parties and human rights organizations. One of the sharpest critics at the time was the current health minister, Nitzan Horowitz. As leader of the Meretz party, he warned that the use of digital tracking was a slippery slope and an assault on democracy. He even demanded that the attorney general put a stop to the tracking.

Now that he is minister of health, Horowitz has apparently changed his stripes. Now that he is leading the effort to reintroduce digital tracking, he has been subjected to harsh criticism, including accusations of hypocrisy for zigzagging on such a sensitive issue.

And these aren’t the only problems facing the government. The debate over digital tracking caused a bitter fight in the Cabinet, due to the opposition of several senior ministers, including Minister of Justice Gideon Saar, Minister of Education Yifat Shasha-Biton and Minister of Strategic Planning Eli Avidar.

Opposition to such tracking by Avidar came as a surprise. A former member of Avigdor Liberman’s Yisrael Beitenu party, he quarreled with Liberman after the coalition was formed, because he was not appointed a minister, and even threatened to vote against the government. The crisis was resolved by Foreign Minister Yair Lapid, who made sure to get Avidar the ministerial appointment he coveted. Nevertheless, Avidar has been acting independently ever since, thereby posing a threat to an already fragile government.

Avidar participated in public demonstrations against digital tracking, when Netanyahu was in power. Now he is attacking the new government and its leader from the inside with the same fervor and brusque style. The digital tracking law proposal was an “insane effort to cross a red line,” he said adamantly.

During the Cabinet’s discussion of digital tracking, Avidar attacked Shin Bet Director Ronen Bar, accusing him of “falling in love” with the tool. Bennett lashed out at Avidar in response, demanding that he keep the head of the Shin Bet out of the debate. When Avidar retorted that he’ll say whatever he wants, Bennett shouted back, “Who are you to smack-talk the head of the Shin Bet?”

At the end of a heated debate, the Cabinet approved as an emergency move a five-day digital tracking and advancing a law to that effect. This, despite the opposition of several ministers. The bill must now be brought before the Knesset for approval. That should be an interesting fight, though most people think that the opposition, including the Likud, will help the coalition pass the bill. Without this external support, the government has no majority.

No one knows exactly where the Omicron variant crisis will lead, or even if it is a crisis at all. Based on the way things are going so far, Bennett’s response has been particularly problematic. His instructions and guidelines have been inconsistent, and he is losing public trust. As a result, the most immediate challenge that he faces is to expedite vaccinations. Here too, the government’s response is hardly stellar, and further debate within the coalition is still anticipated, particularly over such divisive questions as whether the government should impose sanctions on anyone who refuses to get vaccinated.