Many Israelis feel that the government and Prime Minister Naftali Bennett have lost control over battling the spread of the coronavirus omicron variant. 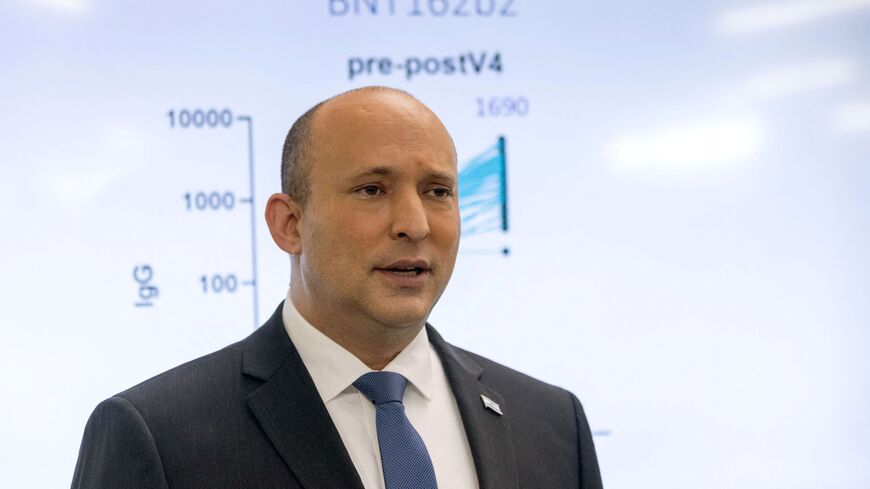 Israeli Prime Minister Naftali Bennett speaks during a visit to Sheba hospital near Tel Aviv, which administered fourth vaccines to 154 of its staff a week earlier as part of a study, on Jan. 4, 2022. - OHAD ZWEIGENBERG/POOL/AFP via Getty Images

The press conference held by Prime Minister Naftali Bennett on Tuesday afternoon took place against an overwhelming feeling among Israelis that the government had lost control of the omicron variant of the coronavirus. There is no way of knowing how many people have been infected each day because the testing network simply cannot keep up. Nevertheless, experts estimate that about 100,000 people were tested in the last day alone.

In his press conference, Bennett informed the public about something it already knew: Israel is being overwhelmed by a new wave of infection, unlike anything ever seen before. Millions are expected to be infected with the omicron variant in the next few weeks. He promised economic assistance to be people who were affected, and emphasized that unlike the previous government, he would not enforce a closure.

Every so often Bennett attacked his predecessor, Benjamin Netanyahu, going so far as to accuse the former prime minister of sowing chaos. “Nothing that Netanyahu does will surprise me. I saw a video of him gnawing away at public trust in the antigen test, even though the rest of the world uses it. What he is doing is not only irresponsible but unpatriotic. He has interfered with public trust,” Bennett said of the opposition leader. He was reacting to a video clip in which Netanyahu questioned the reliability of the virus test.

Bennett stood alone at the podium during the press conference, without any of the relevant ministers — Health, Finance, or Education. As a prime minister with no real political power or public support, he is having a hard time controlling his ministers, as evidenced by his education minister’s blocking of a vaccination campaign in schools. Foreign Minister Yair Lapid, who came down with the coronavirus on Jan. 9, kept a safe distance from any government handling of the pandemic long before he got ill.

Ever since last week, countless Israelis have been experiencing the omicron crisis personally. They are dealing with the way government policy zigzags back and forth, with instructions sometimes taking a 180-degree turn in a matter of hours.

It all starts with the long lines. People stand for hours to be tested in an organized manner. Home test kits are both high-priced and hard to find. Tens of thousands of infected school-age children and thousands of sick teachers are quarantined at home, even though the education system is open and there are no restrictions on the economy. All of this results in what is called “a quiet closure,” with empty shopping malls, cancelled events, and of course, far more people infected by the virus. Coronavirus wards are already being reopened in the country’s hospitals, and we have yet to reach the crest of this wave.

The result is that the new government, which brought hope to the country by ending a long political crisis, now finds itself caught in another one — a crisis in public trust.

Much of the rage is directed at Finance Minister Avigdor Liberman, especially from business owners. While the previous government handed out generous financial grants, Liberman announced Jan. 9 that he would not be giving out free gifts, and that he would not bribe voters. He even told the media that on Thursday, he ate at a restaurant that was packed. This tough approach did not score any points for the government or the man who heads it. If anything, it seems to show that the finance minister is ignoring his opinion. According to several reports, Bennett actually asked Liberman to provide a safety net to businesses, but the minister refused.

Education Minister Yifat Shasha-Biton actually disappeared from the public eye a few days ago. Previously, Shasha-Biton was identified with the opposition to the last government’s handling of the coronavirus, arguing that the closure policy was a failure. On one hand, she is unwilling to restrict studies in schools, but at the same time, she does not appear to be in control of the situation.

Minister of Regional Cooperation Issawi Frej of Meretz, however, admitted in a Jan. 11 interview that Israel is headed toward “herd immunity.” As he explained, “Based on the figures we have, 2 to 4 million people in the next three weeks should test positive. This is the direction we are taking. Why should we put our heads in the sand like an ostrich? The pandemic affects everyone.” Frej also said that the state lacks the ability to provide the necessary number of tests.

The feeling of public disappointment and anger can also be seen in the polls. On Jan. 8, Channel 12 News released a poll in which over 60 percent of respondents gave a bad grade to the government’s handling of the coronavirus, as compared to 34 percent who thought that it was handling it well. Also, 62 percent thought Bennett is doing a bad job in the crisis. Disapproval ratings for Health Minister Nitzan Horowitz were 57 percent, for Shasha-Biton 65 percent, and for Liberman, 66 percent.

The present government's leaders were the biggest critics of the way the previous government handled the coronavirus, going so far as to accuse Netanyahu of losing control and causing chaos. Now, they are forced to deal with public disappointment over their own performance, and with the historical record readily available. Social media is full of old video clips in which Bennett promises to rein in the coronavirus in just four weeks, and of Lapid accusing Netanyahu of being responsible for a fiasco.