Opposition head Benjamin Netanyahu and Foreign Minister Yair Lapid are the big winners of the decision to dissolve the Knesset, while Prime Minister Naftali Bennett and his ally Interior Minister Ayelet Shaked are the big losers. 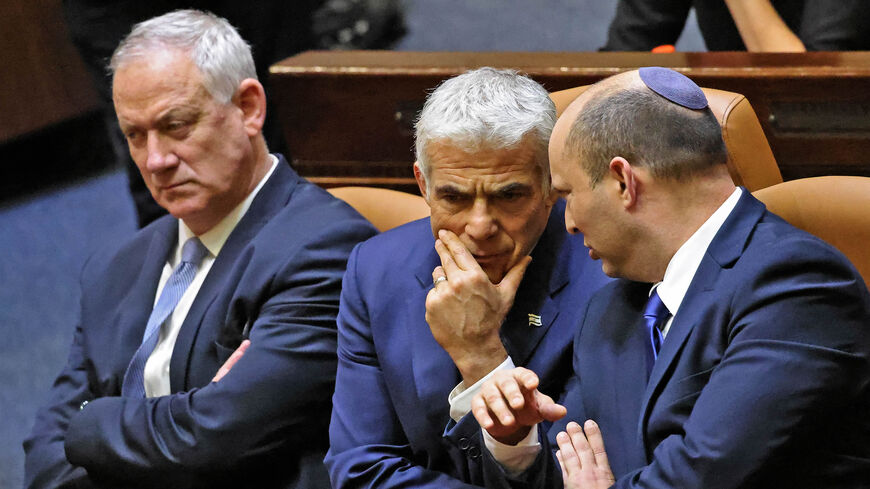 Israel's Defense Minister Benny Gantz looks on while Alternate Prime Minister and Foreign Minister Yair Lapid converses with Prime Minister Naftali Bennett as they are seated in the Knesset chamber after a special session to vote on a new government at the Knesset, Jerusalem, June 13, 2021. - Emmanuel Dunand/AFP via Getty Images)

After a stormy and heated debate through the night, not unlike the rest of the 24th Knesset’s brief life, the Knesset voted on the first reading of a bill to dissolve itself. The process should be over by midnight tomorrow, June 29. Thus, the current Israeli parliament will reach its end after just a year and three months, out of a four-year mandate.

Until tomorrow night, the parties are expected to continue squabbling over the precise date for Israelis to head to the polls. The opposition wants the next election to take place Oct. 25, about a week after the fall holidays. The coalition wants to hold it off until Nov. 1.

Right now. however, the opposition is trying to postpone the final vote altogether, claiming that it still hopes to cobble together an alternative government under Benjamin Netanyahu. There is little chance that this will succeed. More likely, Netanyahu gets a certain perverse pleasure out of making Foreign Minister Yair Lapid fret worriedly, as he waits for his chance to fill the prime minister’s office for the next three months.

In the meantime, Netanyahu has also managed to chalk up a symbolic personal victory. Lapid may want to dissolve the Knesset quickly, but he and other members of the coalition agreed to the opposition’s demand not to put a law barring anyone accused of a felony from forming a government. Given the tight schedule, it was unlikely that the law would pass, but the government still bandied it about, if only to goad Netanyahu and the Likud. It was a personal bill, targeting Netanyahu specifically. The coalition just wanted to make sure that everyone knows that the former prime minister is standing trial for felony charges.

There are two obvious winners in this decision to dissolve the Knesset: Netanyahu and Lapid. The two of them will now face off in a fight for the prime minister’s office.

Netanyahu managed to survive a difficult year in the opposition. He led a series of parliamentary maneuvers, which shortened the life of the current coalition. He enters the campaign more popular than ever, even though he is still being tried for fraud. He actually has a good chance of returning to the prime minister’s office.

The other big winner is Lapid. Tomorrow at midnight, once the Knesset is dissolved, he will automatically become Israel’s acting prime minister. No vote in the Knesset is necessary. He doesn’t even need to be sworn in. This is because the current government, including Alternate Prime Minister Lapid, was already confirmed by the Knesset last year with the swearing-in of the Bennett government.

This is all part of the coalition agreement between Bennett and Lapid, which addressed exactly this scenario of rotation in a situation where the government is toppled. Thus, the transition will happen automatically. At midnight tomorrow, Lapid will have all the authority held by outgoing Prime Minister Naftali Bennett for just over a year. He will have the same security detail as Bennett and the same official convoy, accompanying him wherever he goes.

A brief ceremony marking the transfer of power will take place in the prime minister’s office on Thursday morning, and Lapid will begin his day as leader of a transition government. This is an enormous achievement for the 59-year-old Lapid, but also for the center-left camp as a whole. The last time it had a representative in the highest office in the land was 2009, when Ehud Olmert was prime minister.

The Cabinet itself will not change. All its ministers will remain in office. For now, even Lapid will continue to hold on to the Foreign Affairs portfolio. Bennett will hold the Iran file, unless he decides to resign. He has yet to make a final decision.

On the other hand, the government will have very limited ability to advance any long-term programs. It lacks a coalition to push anything through the Knesset, which will already have dissolved itself anyway. But Lapid has one invaluable asset — he will be running his election campaign from the prime minister’s office.

In less than three weeks, it will be Lapid who greets US President Joe Biden, when he arrives on an official visit to Israel. Lapid will walk down the red carpet with the president. Israelis will have a chance to see Lapid and his wife playing host and hostess to the Bidens. Photos of Lapid with Biden will figure prominently in the campaign as well, as Lapid attempts to present himself as a statesman of international caliber. The White House seems to be playing along. According to reports, they are hard at work trying to make at least symbolic headway in the normalization of relations between Israel and Saudi Arabia.

After running so many election campaigns from the prime minister’s office, Netanyahu is suddenly the underdog. He is now leader of the opposition, without any official symbols of status and power. It is not even certain if he will meet with Biden during his upcoming visit.

On the other hand, the fact that he has already been in office for close to 14 years affords him a clear advantage. He is a known variable; his image is already established.

The biggest loser is the outgoing prime minister, Bennett. He is being forced to step down, after attaining the highest office in the land in a series of brilliant political maneuvers. He was simply unable to hold on this remarkable political achievement.

For the last few days, Bennett has been trying to market his government as an unprecedented success, but people aren’t buying it, at least according to the polls. Bennett is leaving the prime minister’s office as leader of a party on the verge of extinction. Most of his base has already abandoned him when he formed a coalition with parties on the left and an Islamist party (Ra’am), despite all his election promises that he would never do that.

In fact, ever since he announced his resignation as prime minister June 20, Bennett has reportedly wavered between a desire to remain an active player in the next election campaign and an urge to quit politics, either entirely or temporarily. For the first few days, he seemed likely to quit politics or take some time out, but this week he has been signaling that he is still considering running in the next election. If he does that, he will probably have to find a new base and appeal to center-left voters.

Other losers are the remaining members of the Yamina party, who stuck with Bennett to the bitter end. Chief among them is Interior Minister Ayelet Shaked. She remained at Bennett’s side for the past decade, and has been with him at every station of his political career. This leaves Shaked without a political home of her own. She is trying to get Bennett to hand over leadership of Yamina to her, but the two have been squabbling recently, and appear unable to reach an agreement. For the last few days, Shaked has even tried to form an alternative government led by Netanyahu, but all her efforts went nowhere.

Then there is Justice Minister Gideon Saar and the members of his New Hope party. It has long been Saar’s goal to bring down Netanyahu, and in fact, he succeeded, at least partially. Yes, Netanyahu was forced out of the prime minister’s office, but he also managed to boost his position as leader of the right.

Saar had hoped that Netanyahu would never survive defeat at the polls. It was the only way for Saar to return to his old home in the Likud. Instead, he is heading into the next election with a party teetering on the electoral threshold. In this campaign, he is going for broke. He could lose everything, or he could pass the electoral threshold and win four critical seats that Netanyahu will need to form a new government. In that case, he will be able to force Netanyahu to give him a senior position. It’s a complicated gamble.

But the biggest losers of all are the people of Israel, who will be heading to the polls for the fifth time in just 3½ years. To make matters worse, they have no assurance whatsoever that the next election will resolve the deep political divide in the country.