Chances for succeeding seem low, but opposition leader Benjamin Netanyahu does not give up on the possibility of establishing an alternative government. 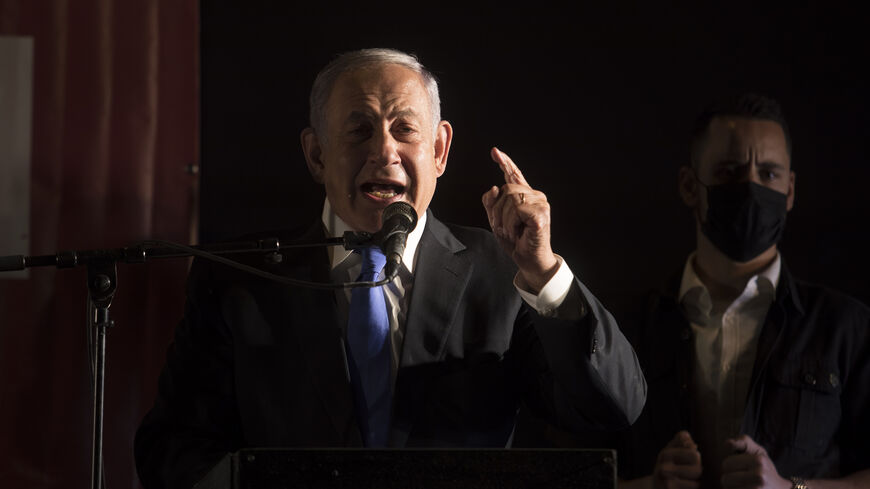 Will chairman of the opposition Benjamin Netanyahu succeed in building an alternative government in this Knesset, and stopping the election train?

That’s the big fear of Foreign Minister Yair Lapid, who is expected to enter the prime minister’s office next week to replace Naftali Bennett, for the transition period until the next elections.

If this scenario of Netanyahu is realized, Lapid would be the big loser.

The political crisis in Israel is so deep and acute that scenarios that seemed extreme in the not-distant past are happening one after the other. On June 20, Bennett and Lapid called a press conference that shook the electoral system. They announced their intention to dissolve the Knesset and hold an early election, and that Lapid would immediately replace Bennett in the prime minister’s office. This means that Bennett will leave his position within a week.

Since then, one event has followed another. On June 22, the Knesset already voted in a preliminary reading to dissolve itself, and according to plans next week the legislative process will be completed in first, second and third readings, and Israel will prepare for an election on Nov. 1, 2022. A fifth within three years.

But Netanyahu is working to prevent this scenario and to try to be appointed prime minister next week without an election. Although the chance of this happening is not great, it exists, and senior opposition members including the leaders of the ultra-Orthodox parties who are not interested in an election for fear that their power would erode, are working with all their might to achieve it.

Netanyahu needs the support of 61 Knesset members (the required majority) in order to form a government. Polls of the last few months show that Netanyahu and the Likud are getting stronger. Still, he appears to be geared not toward elections, but chasing a less likely possibility of an alternative government. This begs the question, why is Netanyahu, who seemed to yearn for an election after his support has strengthened in the polls — suddenly got cold feet?

According to senior Likud members, Netanyahu understands that his ability to achieve 61 mandates is not high and involves a huge risk. The reason is that it is very doubtful the ultra-Orthodox would agree once again to go blindly with him to the opposition. After a year outside the government, the ultra-Orthodox public feels the budgetary drought deeply, and it is quite likely that next time its religious leadership will dissolve the alliance between the ultra-Orthodox parties and Netanyahu, and that would be his utter end.

The two figures the chairman of the opposition approached directly and indirectly are Justice Minister Gideon Saar and Defense Minister Benny Gantz. If Saar, a former Likud member, reaches an understanding with Netanyahu, and joins him along with the five Knesset members of his party New Hope, next week a fully right-wing government could form. But Saar announced that he has no intention, now or in the future, to sit with Netanyahu, but rather wishes to cause his permanent ouster from the political system.

Gantz sounded no less decisive than the justice minister, and even demanded that members of his Blue and White party reject out of hand any potential approach from Netanyahu.

The ultra-Orthodox are applying most of the pressure on Saar and Gantz in order to prevent the election. In fact, it turns out that at the opposition party leaders’ meeting June 21, Netanyahu asked heads of the ultra-Orthodox parties Moshe Gafni and Aryeh Deri to try to mediate with New Hope, to try to form a government in the current Knesset.

Gafni quickly spoke with Saar, but was turned down. He received a similar response from Gantz, who was offered to be first in a rotation for the Prime Ministry. Gantz listened but made clear that he has no intention to do business with Netanyahu after he had deceived him in the past.

A surprising figure that is working tirelessly to form an alternative government is Interior Minister Ayelet Shaked, No. 2 in Bennett’s own party and a senior coalition member. Shaked surprised the political world two days ago when she announced that she is prepared to join Netanyahu even in an alternative Knesset.  That is, in contrast to the majority of the coalition, she is not boycotting Netanyahu.

On the morning of June 24, Shaked returned from an official visit to Morocco, where she had received the hard news June 20 about the coalition’s collapse. From that moment, she began a marathon of phone calls and conference calls with the aim of forming an alternative government headed by Netanyahu.

This is a real anomaly: A minister in the change coalition that was formed with the aim of ending Netanyahu’s rule is now working to return him to power.

A senior opposition member who spoke with Al-Monitor on condition of anonymity said that Shaked is truly “on a suicide mission,” since she understands that if an election is held, she is in big trouble: the Yamina party has broken up and she would find herself outside the Knesset. Like Shaked, other Yamina members know that they would not be elected in the next election, and Netanyahu is trying to poach them.

Despite his low chances, the possibility of an alternative government headed by Netanyahu is shaking and stirring the political system, and mostly Lapid, who would be the main victim of this move.

These efforts by Netanyahu and his emissaries, which are amplified by Shaked and leaders of the ultra-Orthodox parties, are the reason the coalition is rushing legislation to dissolve the Knesset. Lapid fears discovering at the last moment that Netanyahu has stolen the Prime Ministry from under his nose. So at the start of next week, there will be a race against time in the Knesset on two tracks: Lapid will work to prevent the opposition from delaying the dissolution of the Knesset by existing parliamentary means, and Netanyahu will continue to apply pressure on and to court Saar and Gantz with generous offers.

In the meantime, Lapid is preparing to enter the prime minister’s office, and on June 23, Bennett started a round of farewell visits and meetings with security establishment heads. “I hand over a strong and secure State of Israel with quiet on its borders,” he said in a speech at an air force pilot training graduation.

Bennett is seeking to leave a legacy of a prime minister who saved the country from chaos at a critical juncture, stabilized it and is passing the baton in a relay to his ally in an orderly fashion. It is still not clear where he is headed, perhaps he would join Lapid’s list? Perhaps he will leave politics for a break before returning? What is certain is that in his few remaining days left as prime minister, he will take part in efforts to prevent Netanyahu from forming an alternative government.