The Knesset’s winter session, which opened yesterday, is expected to test the precarious coalition of Prime Minister Naftali Bennett. 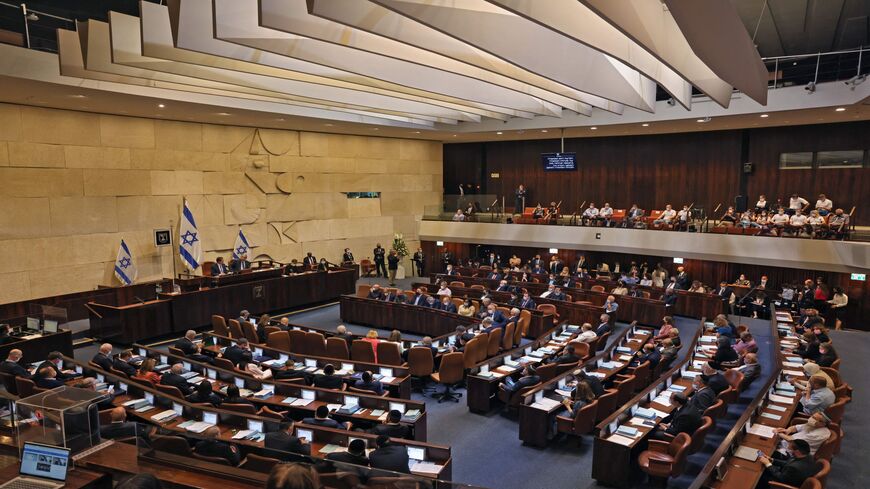 “Contain yourselves for a few more weeks. Don’t pick fights on Twitter. It’s not worth it. If you shake the coalition up now, the people of Israel will not forgive you for it, and your electorate will not forgive you.” That was Foreign Minister Yair Lapid’s firm message to the members of the coalition Oct. 4, about an hour before the start of the Knesset’s winter session.

Lapid, who is also alternate prime minister, made these remarks at a meeting of his Yesh Atid faction. He was referring, among other things, to a Twitter feud between Minister of the Interior Ayelet Shaked and the Meretz faction.

It all began with the Oct. 3 meeting between Meretz ministers and Palestinian President Mahmoud Abbas in Ramallah. Media reports claim that during the meeting, Abbas expressed a desire to meet with Shaked, one of the most right-wing members of the coalition, and a person especially close to Prime Minister Naftali Bennett. In response, Shaked tweeted almost immediately, “It will not happen. I will not meet with a Holocaust denier who sues Israel Defense Forces soldiers in The Hague [ICC] and pays murderers of Jews."

Shaked could, of course, have ignored the visit to Ramallah, just as Bennett did. Despite the damage it might cause him on the right, Bennett realized that there was no way to stop the meeting from taking place, so it was best to ignore it. In contrast, Shaked decided to milk the event for political and media buzz. The question is: Why?

Shaked is trying to present herself as defender of the right within the coalition. Ever since she joined the current coalition, she has been mocked and disparaged by large swaths of her rightwing electorate. Ironically, her desire to rehabilitate her own image resembles the desire among the Meretz ministers to prove to their base that they have not abandoned the two-state solution. In both cases, partisan ideology conflicts with the need of the current coalition to maintain harmony among all its constituent parts. Without that, the coalition will collapse.

That was the background behind Lapid’s message. It was also behind Bennett’s remarks at the Knesset’s opening session. “This government is stable," he said in a speech targeting his own coalition. "Please God, the budget will pass, and we will remain sustainable. We plan to stay in office for the next four years.” He continued, “For this to happen, we must be extra-responsible. None of us is being asked to put aside our ideology or our positions, but we are being asked to keep our behavior in check. That is exactly what it means to act wisely.”

It looks like Lapid and Bennett coordinated their messages. It is in both of their interests to keep the coalition alive, even though it has just 61 seats, or a bare majority. Both men know that beyond any lofty talk about unity, the political system is not quite stable yet. In fact, it comes with a very limited warranty.

After doing the impossible and forming a government, they must remind every member of the coalition that it could fall apart at any given moment. In other words, nothing about the current government should be taken for granted.

What this means in practice is that the Knesset’s winter session will test this fragile coalition’s maturity. After its first 100 days of relative calm, it will have to prove that it can govern in difficult circumstances. Its first test will be passing the second and third reading of the budget by the end of November.

The general assessment is that the budget will pass, even if there will be many difficulties along the way. All members of the coalition will be forced to make concessions for one simple reason: None of them wants to break up this partnership now. For some parties, new elections are a political death sentence.

The big question is what will happen after the budget passes, which has been built up as a climactic moment. There is some fear that coalition discipline will decrease significantly once the member parties feel safe enough to air their agendas.

The current government is not operating in a vacuum. Even after he was removed from the Prime Minister’s Office and became Head of the Opposition, former Prime Minister Benjamin Netanyahu remains the most influential figure in the entire political system. Two polls released yesterday found that the Likud under Netanyahu's leadership is now projected to win 34-35 seats, making it the country’s largest party by a significant margin. The second largest party in these polls is Lapid’s Yesh Atid, which is projected to win around 20 seats.

Bennett’s Yamina party, however, has not been able to win public support. Bennett was convinced that once he took the prime minister’s office and addressed the United Nations [Sept. 27], his popularity would rise. In fact, the exact opposite happened. His most favorable poll has Yamina winning just 7 out of 120 seats. Never before has Israel been governed by a prime minister with so little public support. It certainly matters when he has to deal with his coalition partners.

A poll conducted by Channel 13 found that over 60 percent of the public are unhappy with Bennett’s performance. Similarly, the other right-wing party, New Hope, headed by Justice Minister Gideon Saar, is collapsing in the polls. In fact, it is not at all certain that it will even pass the electoral threshold.

All these polls suggest that the members of the coalition will do whatever it takes to keep the coalition alive, rather than face a new election with Netanyahu still in the picture. That is why Saar is advancing legislation that would prevent someone charged with a felony from forming a government. The legislation may have a moral component, but for the most part, it is intended to block one individual in particular – Benjamin Netanyahu.

Bennett once announced that he would not help pass any laws targeting Netanyahu. Now, it looks like he has changed his mind. Meanwhile, people in Netanyahu’s orbit tell Al-Minitor that even such a law will not keep Netanyahu out of the game. In fact, it will actually bolster public support for him. “Any law can be changed after the election,” one of Netanyahu’s associates told Al-Monitor, on condition of anonymity. “That will be our message to the public. If you want Netanyahu, vote Likud. We will change the law once we are back in power.”