Justice Minister Gideon Saar is advancing a law proposal that will prevent any person indicted for serious criminal offenses to participate in government formation. 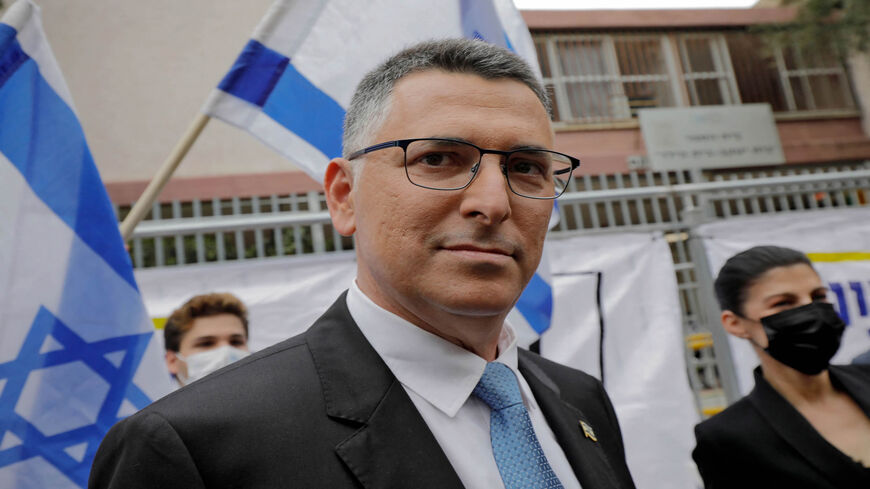 Gideon Saar, chairman of the New Hope party, and his wife Geula are pictured outside a polling station, in the country's fourth national election in two years, Tel Aviv, Israel, March 23, 2021. - Jalaa Marey/POOL/AFP via Getty Images

Israeli Justice Minister Gideon Saar released Oct. 19 a draft of a bill he is proposing, which would bar a lawmaker charged with a serious crime from cobbling together a government. A serious crime would mean in this case an indictment that could result in three years or more of incarceration. If the bill is approved, it could prevent former Prime Minister Benjamin Netanyahu from returning to power.

According to appraisals in the coalition, such a bill could garner a majority: Even if there will be those in the coalition who oppose the bill, Knesset members of the opposition Arab Joint List party would support it.

In actual fact, we are looking at a bill directed specifically at one person: Netanyahu, opposition chairman and leader of the largest party in Israel that, according to recent polls, is getter stronger. The new bill targeting him is unusual, as most parliamentary democracies in the world have not adopted similar legislation. Thus, ever since it has been publicized, the bill has stirred up the political system.

Saar had served in the past as senior minister on behalf of the Likud, and had competed against Netanyahu over party leadership. After his defeat, he quit the party and even politics for a while, establishing later on a party of his own, named New Hope. Shortly after the establishment of the Bennett government, Saar started advancing the anti-Netanyahu bill. Now, with the opening of the Knesset’s winter session, he is operating with all his strength for an accelerated procedure for a rapid adoption of his law proposal.

Since its publication, Saar has been defending the controversial bill. “The bill draft I circulated today sets an important moral norm. Opposition to the proposal — is personal. And the denials regarding the authority of the Knesset to legislate this law — are undemocratic,” he tweeted.

Saar received a tailwind from Foreign Minister and Alternate Prime Minister Yair Lapid who sided with Saar in a tweet of his own. Lapid called the proposal “almost obvious,” and said that it doesn’t make sense that people indicted with crimes cannot occupy the positions of the prime minister’s driver, his security guard, his medical personnel or any other employment in the official residence, while a person indicted with crime can run for the position of premier.

The Likud party responded sharply to the bill, attacking Saar and saying that his New Hope party barely scratches the electoral threshold. "He proposes an anti-democratic law like in Iran, which seeks to disqualify those who receive 35 seats, and are supported by millions of citizens as their representative for prime minister — what a disgrace," the party tweeted.

Similarly, Netanyahu responded to the bill sarcastically, saying, “After they stole the recent elections, [Prime Minister Naftali] Bennett and Saar are trying to steal the upcoming elections. Saar’s Iranian law is tantamount to declaring war on democracy.”

This is a dramatic development in the coalition because this law is not included in the coalition agreements. Yamina, the party of Prime Minister Bennett, had opposed it at the time. In fact, Bennett had declared before the elections that he would oppose such a law. Still, now it seems that he had softened his objection and has probably given Saar the green light for proposing it.

As of now, the only minister who has expressed public opposition to a new law is Interior Minister Ayelet Shaked. "I do not think the attorney general should decide [whether or not to indict a lawmaker] who heads the Cabinet," she said. However, Shaked herself is not a Knesset member since she quit in the framework of the Norwegian law [when appointed minister]. Thus, her opposition has no real significance.

Netanyahu and the Likud send out war signals, implying that they are readying for war against the new law on the public, political and legal planes. Almost all of the Likud’s Knesset members came out against the law, and some of them announced that even if the law will pass now, they can always change the law back when the Likud will return to the rulership. This will definitely serve the Likud’s strategies in the next elections, expected in principle to take place in a bit less than four years. Still, not waiting for the elections, they present the bill as persecution of the entire right-wing camp, via disqualifying a popular leader.

“One clerk will decide to remove a person who was chosen by millions from the [political] game, and will do so without a trial, without proof and without justice!” tweeted Likud legislator Galit Distel-Etebaryan. She said, ‘Since everyone knows that this law is targeting only right-wing candidates, the law turned all right-wing citizens to residents without freedom of choice. We won’t keep silent, absolutely not.” Media members identified with Netanyahu and the Likud also embarked on a harsh offensive against Saar and the bill. Yinon Magal, journalist and media influencer, called it “the law of the losers.”

By advancing this bill, Saar has placed a political roadside bomb for Netanyahu and the Likud. Still, this tactic could backfire and ultimately serve Netanyahu, who could use it to allegedly prove that he is hounded by his opponents and the legal system. Such a development could seriously threaten the government, which enjoys a very fragile 61-narrow majority at the Knesset.

The Likud is expected to petition against the bill at the High Court with the following arguments: that the law is directed against one person only, that it is anti-democratic, that it impairs the presumption of innocence of the citizen and that ultimately it also impairs democracy itself, which is the “rule of the people.”

That being said, Saar the legalist has properly prepared himself for this very moment. According to publications, his proposal is backed by Attorney General Avichai Mandelblit. Other senior legal experts also believe it is based on legal reasoning, especially in light of Netanyahu’s behavior over the last two years when he tried to manipulate democracy for his own interests. Still, at some point Saar will be forced to explain why he, when serving as a Likud member a few years ago, opposed the law so conclusively.

One way or another, these were the opening shots of a huge political battle — a battle for the way that Israeli society and its political system will look over the coming years. Despite prior publicity that Netanyahu will consider accepting a plea bargain and is readying for retirement when the budget is passed, he is not showing signs of holding up the white flag. On the contrary. He is fighting for his place in the Likud leadership and he enjoys strong support from the public, despite the fact that he no longer runs the show. Therefore, a legal-juridical action that would harm his ability to be elected — and the ability of more than a million citizens to choose him — could become a historic event in Israel’s political-legal annals.