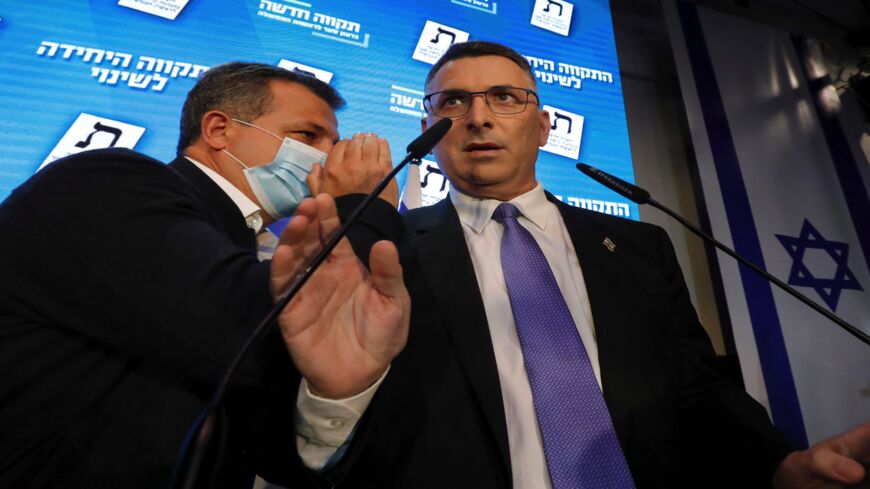 An aide whispers to Gideon Saar (R), leader of Israel's Tikva Hadasha (New Hope) party, as he addresses supporters at his party's campaign headquarters in the Mediterranean coastal city of Tel Aviv early on March 24, 2021, after the end of voting in the fourth national election in two years. - JALAA MAREY/AFP via Getty Images

Justice Minister Gideon Saar is set to submit Nov. 13 to the ministerial committee for legislation a bill limiting the term of office of the prime minister to eight years only. In Israeli politics, eight years represent two terms in office. If approved by the committee, the bill will be transferred to the Knesset for a vote.

Still, even before being presented to the committee, the new legislation is stirring up controversy both in the Knesset and the political system. Saar, currently head of the New Hope party and former senior Likud member, has been pushing this bill for several months now. If approved by the Knesset, the bill won’t be applied retroactively. In other words, it won’t prevent former Prime Minister Benjamin Netanyahu from running again for office. Still, together with a second bill, also pushed by Saar, it is targeting Netanyahu’s image as a leader refusing to let go of power.

The second piece of new legislation prevents anyone accused of a felony from receiving the president’s mandate to form a new government and from heading one. Contrary to the eight-year limitation proposal, expected to go through and be enacted, this second bill, generally considered far more radical, is already facing difficulties. The reason for that is primarily since it targets more clearly Netanyahu, who is currently on trial for corruption and breach of trust. Saar wants this law to go into effect as soon as the next election.

As of now, the second law lacks the 61 coalition votes it needs to approve it as a Basic Law. Its opponents (within the coalition) include Interior Minister Ayelet Shaked, who is relatively close to Netanyahu, and Knesset member Michael Biton of Defense Minister Benny Gantz’s Blue and White party. Prime Minister Naftali Bennett has yet to make his position known, though he has in the past opposed any personal legislation targeting Netanyahu.

In an interview Nov. 9, Biton explained that his opposition to the law is based on the fact that it so clearly targets a single individual, Netanyahu, who has yet to be convicted and is therefore presumed innocent. He would rather see the law go into effect three years from now, once Netanyahu’s legal fate is known. As he put it, “This kind of legislation is very good, but it needs to be formulated in such a way that it is not personal. The principle behind it is very important, but we don’t want to win the next election through legislation, especially not personal legislation targeting a single individual. That is why we contend that the law should only go into effect in another three years.”

Biton also pointed to the most controversial aspect of the law, both socially and politically: “We cannot ignore the fact that every fourth person in the country identifies as a member of the Likud party, and every third person in the Jewish sector. We are about to determine the fate of democracy. The law is necessary, and it is appropriate. If people cannot be appointed to ministerial positions once they are under indictment, there is no doubt that the same should hold true for the position of prime minister.”

With this, this second bill (banning anyone accused of a felony from forming a government) has a bumpy road ahead of it. Saar is adamant on presenting to the Knesset the first bill, which is likely to pass. But being an adroit politician, he is unlikely to humiliate himself by bringing up the second legislation without any chance of it passing.

That being said, Saar continues to push the second bill in the media. For this, there might be a price to pay. The very fact that he is willing to promote such legislation puts him right in the eye of the storm. Some say that his personal animus toward Netanyahu and his defeat by Netanyahu in the Likud primaries in December 2019 are why he is seeking revenge. He is trying to politically eliminate Netanyahu through legislation.

The Likud’s campaign against the new laws focuses on this specific point. It depicts Saar as an allegedly unpopular individual who would not even pass the electoral threshold with his New Hope party if the polls are to be believed. That is why, they are claiming, he is resorting to what they call undemocratic means.

The Likud said as much last month in its official Twitter account: “Gideon Saar, who is scratching the bottom of the electoral threshold in all the polls, is following in Iran’s footsteps by proposing anti-democratic legislation that would disqualify someone who receives 35 seats in the polls and is the choice of millions of citizens’ for prime minister. How embarrassing!” This aggressive post was accompanied by an image of the latest poll results showing Saar collapsing while Netanyahu gains strength.

But there is also another side to the story. Netanyahu and the Likud recognize the electoral potential of legislation targeting Netanyahu personally. It fans the feelings of discrimination and persecution prevalent among so many Likud supporters and voters on the right in general — a very large segment of the population. In fact, it is Israel’s largest political grouping even now, after the person heading it was defeated and sent to the opposition. Although he was removed from his lofty position, Netanyahu is still popular and continues to gain strength.

When explaining the legislation that he is advocating, Saar emphasizes that it is the responsibility of this government to ensure that “the situation that the country was in until recently does not repeat itself.” He is referring to the turbulent political period of the past two and a half years, which dragged Israel through four bitterly contested elections, all of them overshadowed by the criminal proceedings facing the prime minister.

The memo about the proposed law to limit the term of the prime minister to eight years states: “It is hard to overstate the power and importance of the position of prime minister. The person serving in this position has public and political power that impacts most aspects of life in the country, whether directly or indirectly.” As a result, “It is only natural that serving in this powerful position for any extended amount of time can lead to an exaggerated concentration of power in the hands of one person. This could have harmful consequences.”

While this explanation seems justified, it raises several legal questions, not to mention certain issues, which touch on the very essence of a parliamentary democracy. This week, the right-wing intellectual website Mida published an article that was shared by Netanyahu’s son Yair on Twitter. The article brought legal arguments claiming that Saar’s legislation (the eight-year limitation) is “anti-democratic.”

It argued: “The law being submitted by [Foreign Minister Yair] Lapid and Saar seriously distorts the parliamentary system. Nowhere in the world is there a parliamentary system that places limits on how long a government can serve, because its tenure results from the parliament’s trust in the government. This is subject to change and cannot be limited in any way.” It also claimed: “The cynical, personal, short-sighted political motivation of those proposing this legislation sets a dangerous precedent. It would allow any government to pass legislation targeting its opposition with an endless series of restrictions so that nothing is left in the end.”

What this seems to insinuate and remind voters is that even this so-called “personal law” can be changed should the right return to power. In political terms, if the law is put into practice, Netanyahu will surely wage a huge public campaign against it. This will be the major campaign of the Likud under his leadership. He will ask for 61 seats from the right to enable a government headed by the Likud to repeal the law.

More so, even if both bills go through, Netanyahu will still be able to run again for Knesset for the position of legislator. Then, after the election, the Likud could put forward a sort of an interim candidate to form a government — someone not indicted. If the Likud with its interim candidate manages to form a government, the first thing they would do is repeal the indictment-limiting law. The minute they succeed with that, they would reinstate Netanyahu to power.