Justice Minister Gideon Saar's proposed law to limit the term of the prime minister to eight years was approved at a preliminary Knesset hearing. 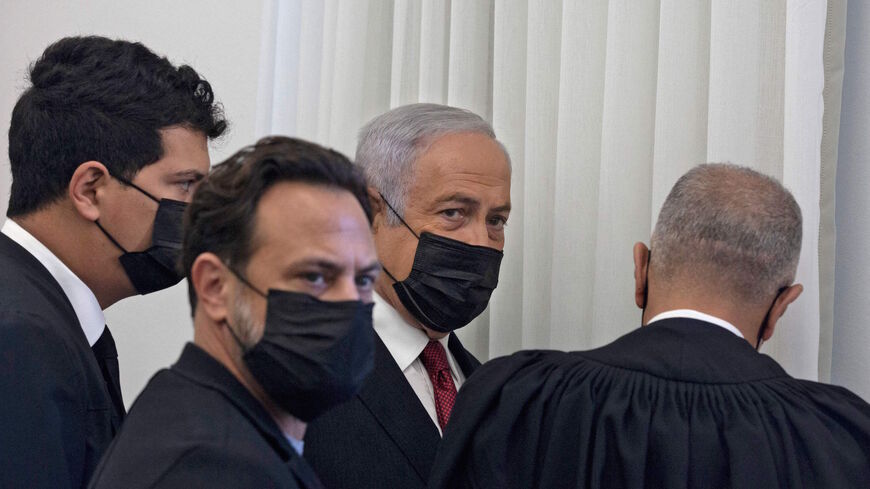 Former Israeli Prime Minister Benjamin Netanyahu (C) is flanked by lawyers before testimony by star witness Nir Hefetz, a former aide, in his corruption trial at the District Court in east Jerusalem, on Nov. 22, 2021. - MAYA ALLERUZZO/POOL/AFP via Getty Images

On Nov. 22, the Knesset passed the first reading of new legislation limiting a prime minister’s term to no more than eight years. Less than a minute after the vote, former Prime Minister Benjamin Netanyahu was seen scurrying out of the Knesset plenum.

The passing of the first reading was practically inevitable. The law was pushed forward by Justice Minister Gideon Saar, with the enthusiastic support of all members of the coalition. Once it passed, they presented it as a major achievement.

Although the law would not prevent Netanyahu from running — at least not in the immediate future — the spirit of the former prime minister and his many long years in office haunts every letter of the legislation. Opponents of the law will state repeatedly that no other parliamentary democracy has anything comparable.

Justice Minister Saar tried to refute these arguments in a speech to the Knesset right before the vote: “Prolonged rule of one person is a harmful thing. In the face of the dangers of excessive concentration of power, and the resulting corruption, we offer a better and more balanced arrangement.” Saar added he believed the situation over the last few years proved that term limits should be entered into the law books.

Throughout his speech, it was hard not to notice the intense grudge that Saar has toward Netanyahu. Once again, he succeeded in limiting the options available to the man who forced him out of his political home in the Likud. It was evident that he sees Netanyahu as a clear and present danger to the State of Israel.

For Saar, this law is just one more stage along the path to more significant legislation, intended to block Netanyahu from running again once and for all. The next law in this series would prevent anyone accused of a felony from forming a government. So far, Saar has had a hard time garnering support for that controversial piece of legislation, since it so clearly targets Netanyahu. It also contradicts the democratic principle that people are presumed innocent until they are convicted. As such, the proposed law is met with passionate opposition from Netanyahu’s many supporters.

Netanyahu’s strategy in response to ridicule Saar and Prime Minister Naftali Bennett. Both men head rightwing parties that have been declining in the polls ever since the current coalition was formed. It has been several months since Saar's New Hope party even passed the electoral threshold. In other words, it has almost no public support. Bennett faces a similar predicament. Even as prime minister, his Yamina party has been unable to pass single digits in terms of the number of seats his party would win. It currently stands at just six seats.

In contrast, Netanyahu has widespread support among the right. He uses this to lash out at the government. “Bennett and Saar don’t pass the electoral threshold, but they still want to prevent Israeli citizens from fulfilling their right to vote. It won’t work. We will win, and then we will overturn their ‘Iranian-style’ laws,” he said sarcastically at a meeting of his Likud faction on Monday, just hours before the Knesset vote.

Netanyahu arrived at the meeting straight from district court in Jerusalem. That morning, Nir Hefetz, former communications adviser for Netanyahu and his family, began his testimony. Once a trusted confidante, Hefetz has since turned and become a key witness for the state. His testimony plays an important role in the bribery case against the former prime minister. Through him, the prosecution hopes to prove that Netanyahu was aware that the Walla website was bribed in exchange for favorable coverage of the prime minister and his family.

This sharp transition from the courtroom to the Knesset, where he leads the opposition and represents more than 2 million voters, is the paradox of power. On one hand, Netanyahu has reason to be pleased with his growing support. On the other hand, the stronger he gets, the more likely that the disparate components of the current government will cling to one another  to keep their tenuous coalition together. Thus, it may be a long time before another election.

The Netanyahu trial will undoubtedly play a major role in the Israeli political system in the next few years. His supporters believe that he is being persecuted. It is the narrative that Netanyahu is pushing, and over time, it is taking root. Based on how the trial has been going until now, it will probably take years before the outcome is decided. What this means is that Netanyahu’s fate will not be decided before the next election.

Assuming that Netanyahu runs in that election, his campaign will center around him as a victim, wronged and hounded by the legal system and the left. He will be portrayed as a popular and successful prime minister who was shot down by powerful forces who attacked the people’s choice. This narrative is shared by quite a few members of the Likud party, including former Justice Minister Amir Ohana and the various Knesset members who accompany Netanyahu to court.

One of these is Galit Distel Atbaryan, whom Netanyahu assured a safe spot on his Knesset list. Atbaryan, a well-known author, has emerged as the star of the Likud party over the last few months, due to her wit and rhetorical skills.

After the law limiting term limits passed its first reading, Atbaryan turned to Netanyahu’s rivals and said: “So tell me, do you think that we really buy into this hatred of Netanyahu. After all, you hate the 2.5 million people who stand behind him. You despise us. … You tried to decide who will head our political camp, and you tried to pass personal legislation to remove the person we elected from the playing field.”

Netanyahu’s supporters are not abandoning him, despite statements by Bennett and members of his cabinet that once the budget was passed, the Likud would fall apart and Netanyahu would be forced out. In truth, laws targeting him only strengthen him and his rightwing camp.