Israel's change coalition: What happens next?

Here’s what could happen next as the Knesset gears up to vote on a governing coalition aiming to unseat Israeli Prime Minister Benjamin Netanyahu. 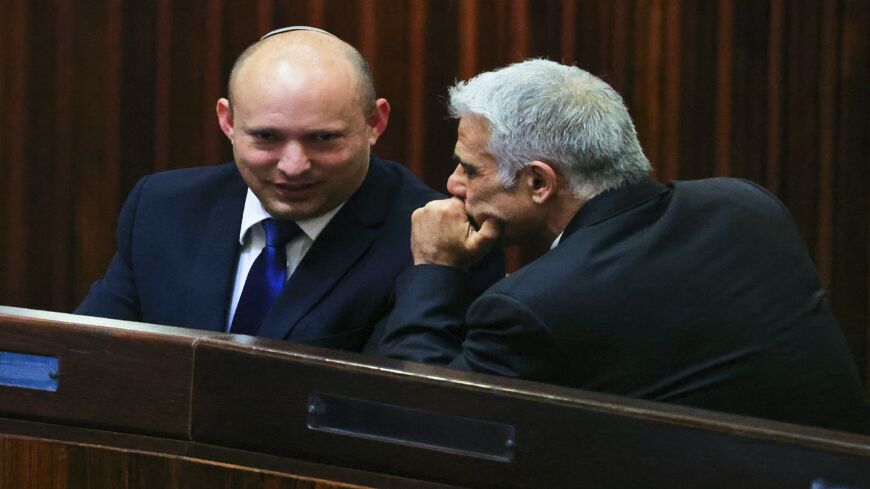 Israel's Yamina party leader Naftali Bennett (L) smiles as he speaks to Yesh Atid party leader Yair Lapid during a special session of the Knesset, Israel's parliament, to elect a new president, in Jerusalem on June 2, 2021. -

An unlikely coalition of Israeli political parties has reached a deal to form a governing coalition in an 11th-hour bid to end Prime Minister Benjamin Netanyahu’s grip on power. A vote of confidence in the new government is needed before a swearing-in can occur, and Israel’s embattled prime minister is mounting a last-ditch effort to prevent his removal after 12 years in office.

“We expect the Knesset will convene as soon as possible to ratify the government, as required,” outgoing Israeli President Reuven Rivlin tweeted late Wednesday.

Ticking clock: Parliament speaker Yariv Levin, a member of Netanyahu’s Likud party, is tasked with scheduling the confidence vote. He's expected to wait as long as is constitutionally possible to do so, meaning a vote might not take place until June 14.

With Levin expected to drag his feet, the new coalition is pushing to replace him with Yesh Atid’s Mickey Levy. Ousting the speaker would require the vote of a simple majority in the Knesset, and the so-called “change bloc” on Thursday submitted the required 61 signatures to schedule a vote next week. But the effort unraveled after Yamina lawmaker Nir Orbach pulled his support.

Majority math: In the meantime, Netanyahu will put pressure on the coalition’s right-wing members to withdraw their support for the newly formed coalition. On Thursday, Netanyahu called on right-leaning members of the Knesset to oppose “this dangerous left-wing government.”

The eight-party “change bloc” assembled by opposition leader Yair Lapid has a razor-thin majority, with just 61 seats in the 120-seat Knesset. Upending the fragile Lapid-led coalition could be achieved with a single defection by a lawmaker on the fence.

There were signs Yamina’s Orbach was wavering in his support for the coalition that’s poised to install his own party leader, Naftali Bennett, as premier. But after meeting with Bennett on Thursday, Orbach indicated to reporters that he would not be voting against the coalition.

Under the power-sharing agreement finalized late Wednesday, Bennett would serve first as prime minister before handing the reins to Lapid in August 2023. That’s assuming the ideologically diverse coalition manages to hold on for that long. Its members have little in common beyond their ambitions of unseating Netanyahu.

Bennett, a former aide of Netanyahu, is under pressure from his Jewish nationalist base for joining forces with centrist Lapid and taking part in a coalition that would for the first time in Israel’s history include an Arab Islamist party, the United Arab List.

Addressing the criticism on Thursday, Bennett told Channel 12 that he did so “to get Israel out of the chaos,” adding that his “new government will be an opportunity to turn the page between Israel and its Arab citizens."

Election do-over? If the confidence vote on the Lapid-Bennett alliance fails, that could set the stage for yet another election — the country’s fifth since 2019. Already Israel’s longest-serving prime minister, Netanyahu would remain in power in the interim.