Prime Minister Benjamin Netanyahu ruled Israel for 12 consecutive years, so it took a coalition of strange political partners to finally oust him from his position. 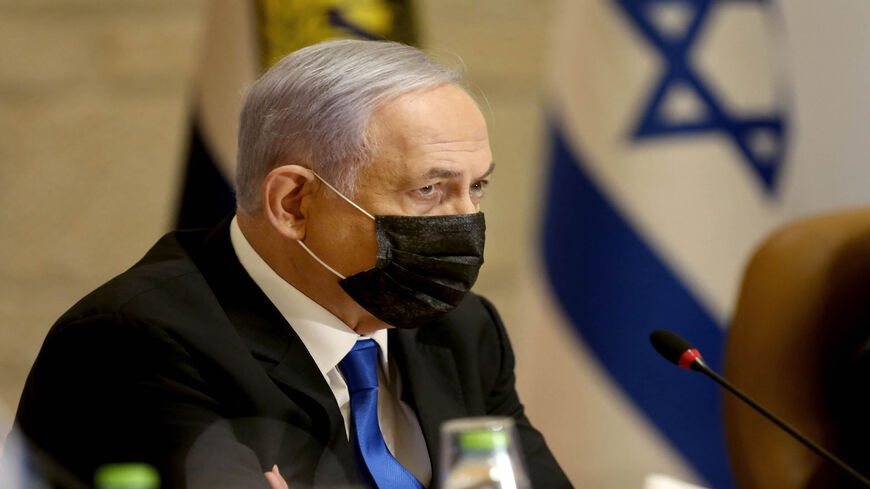 Israeli Prime Minister Benjamin Netanyahu, wearing a mask for protection against the coronavirus, attends a special Cabinet meeting on the occasion of Jerusalem Day at the city's municipality building, Jerusalem, May 9, 2021. - Amit Shabi/POOL/AFP via Getty Images

Reports say that Knesset member Yair Lapid, chair of the centrist Yesh Atid party, will be making an inconceivable statement today, June 1. For the first time in 12 years, a mortal whose name is not Benjamin Netanyahu will inform the president that he has the votes to install Israel’s next government. Almost as strange and unprecedented is the fact that Lapid himself will not head the government that he toiled to compose, handing the job instead to the leader of a different party, Yamina Chair Naftali Bennett.

Lapid has been working diligently for the past month to put together one of the most complex coalition governments in Israeli history, knowing that the only way to make it work is to let Bennett serve as prime minister for the first two years of the government’s term. Israelis are deeply divided over this impending change, which comes with an important caveat given the vagaries of recent Israeli history: It isn’t over until it’s over. The Netanyahu era, which seemed eternal, will only end when the last minister of the Bennett-Lapid government is sworn in by the Knesset, probably on June 8. Only then will Lapid and his coalition partners sigh in relief, along with at least half of Israel’s voting public. The other half will scream, demonstrate, curse, threaten and who knows, perhaps recreate the Jan. 6 invasion of the Capitol, Israel-style.

What brought down King Bibi? A critical mass of arrogance accumulated over the years, especially since his sweeping 2015 election victory, which loosened all his checks and balances. His hubris would have done the ancient Greeks proud. His attempted takeover of leading media outlets led to a criminal indictment on corruption charges, followed by events that spiraled out of control and sent him on a nosedive into the ground.

A more detailed analysis points to three people who were instrumental in his final downfall: Bennett, New Hope party leader Gideon Saar and Yisrael Beitenu leader Avigdor Liberman. All three worked closely with Netanyahu until he kicked them out — and have come back to haunt him. The additional nail in his coffin was Blue and White party head Benny Gantz. Having convinced a somewhat naive Gantz to join his government last May in a power-sharing deal that violated his pledge to voters to unseat Netanyahu, the prime minister proceeded to knife him in the back. He made it clear that he would never make good on his agreement to hand over the premiership to Gantz in November 2021, humiliated him, excluded and trampled him.

Netanyahu won the battle, but lost the war. After he reneged on his deal with Gantz, no one is willing to trust the offers he is now making left and right promising his rivals first shot at the premiership in a new power-sharing government. A desperate Netanyahu has tried to tempt Saar, Gantz and Bennett with such a deal in recent days, promising they would be first in line and he would make do with the title of “alternate prime minister.” They all turned him down flat. Netanyahu has been proven a liar, a scorpion who would even bite himself if it helped him violate a pledge or promise and maintain a hold on power.

To recap, Liberman was the first to pull out of Netanyahu’s house of cards after serving as a close aide and defense and foreign minister in his governments. In the April 2019 elections, Netanyahu and his right-wing and ultra-Orthodox allies garnered a majority of 65 Knesset seats, ostensibly handing Netanyahu a comfortable victory. In a stunning move, Liberman disrupted Netanyahu’s leisurely walk in the park by refusing to join a Netanyahu-led government and thus depriving him of the majority he needed to rule.

The bomb Liberman dropped sent shockwaves through the political arena. Netanyahu was quick to accuse Liberman of jumping ship and joining the “traitorous” political left. Lacking a majority, Netanyahu dismantled the Knesset ahead of new elections. And here is an ironic bit of trivia. The New Right party formed at the time by Bennett and his political partner Ayelet Shaked failed to garner sufficient votes in the April 2019 elections to make it into the Knesset because Netanyahu had eroded its support in a greedy bid to tempt the small party’s voters. Had he restrained himself and allowed the New Right to be elected, Netanyahu would have had the majority he needed to form a government in the summer of 2019. Instead, he chose to humiliate Bennett, reaping the fruit of the poison seed he sowed two years later.

Skipping forward, the results of the March 2020 elections enabled Netanyahu to finally form a government, albeit in partnership with Gantz. However, as mentioned, he immediately set out to undermine the deal, plotting a fourth election in hopes it would rid him of his commitment to Gantz and finally grant him the 61-seat Knesset majority he needed to rule on his own. This scenario would have provided him with a radical right-wing government to facilitate the dropping of the corruption charges against him or at least the suspension of his trial.

The scenario did not pan out, quite the opposite, because a new, wily and determined actor who had been waiting in the wings moved center stage. Gideon Saar, who served as Netanyahu’s Cabinet secretary in 1999 and stood by his side at critical political junctures over the years, took time out from politics after Netanyahu repeatedly humiliated and marginalized him fearing his popularity. When he returned in 2019, Netanyahu refused to bring Saar into his government (despite a specific promise to do so). Saar had had enough. He quit the Likud, formed the New Hope party and was joined by another veteran party fox, former Minister Ze’ev Elkin, yet another scarred and battered victim of the Netanyahu circle.

Saar’s new party garnered only six seats in the March 2021 elections, but two or three of them were provided by disillusioned Likud voters, depriving Netanyahu of his salvation and adding another nail to the political coffin of the man who believed he was omnipotent and immortal. Even the brilliant coronavirus vaccination campaign he orchestrated failed to hand Netanyahu his coveted victory in the March 2021 elections, the fourth in two years.

What's more, as a special service to his opponents, Netanyahu has broken with historic precedent and given a seal of approval to political partnership with an Arab party — and not just any Arab party, the Islamist Ra’am party led by Knesset member Mahmoud Abbas. Netanyahu planted the seed, and Bennett and Lapid will reap the fruit. Ra’am is now likely to support from the outside the new government of change, thus offering it the required 61-majority.

Netanyahu also has copyrights over the political mutation known as a “parity government,” one in which rival parties share equal power. His rivals are now building on the precedent he set with Gantz for their own power-sharing needs. Netanyahu’s shameless betrayal of Gantz, a politician whom even rivals cannot bring themselves to hate, the endless wild spins and lies, the unending flip-flops and the irrational behavior especially by his family, in addition to the prolonged damaging testimony of a key prosecution witness in his trial have together generated the perfect storm buffeting Netanyahu and threatening to unseat him.

It would be premature for Netanyahu’s opponents to gloat. “We can still expect days of brimstone and blood,” one of them told Al-Monitor on condition of anonymity. “Netanyahu has no checks or balances, no inhibitions. He will not hesitate to set Jerusalem on fire in order to remain in power.”

Meanwhile, security has been beefed up around Bennett, Lapid, Ayelet Shaked and other politicians as well as journalists critical of Netanyahu, following death threats. Tense days are ahead for Israeli society and its political system. No one can guarantee they will be uneventful.