Four Netanyahu antagonists could join forces against him

Four main rivals of Prime Minister Benjamin Netanyahu — Yair Lapid, Gideon Saar, Avigdor Liberman and Naftali Bennett — could join forces after the March elections to establish a government without him. 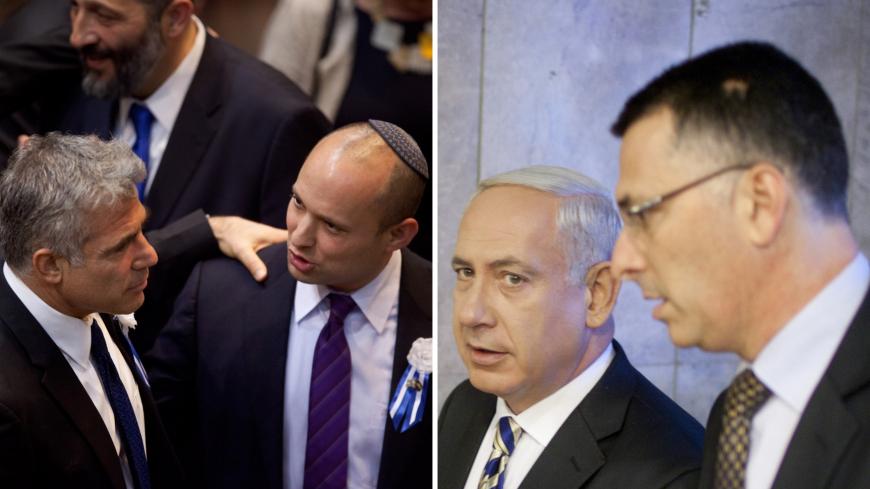 Netanyahu fears a scenario in which this foursome reaches agreement in principle to cooperate the day after in order to withhold from him the majority he needs to form a government. Of the four, Bennett is the only one who has been noncommittal as to whether he would join a Netanyahu-led government after the elections.

All four despise Netanyahu and would do almost anything to remove him from power and his family from the prime minister’s residence in Jerusalem. Three of the four have often declared that they would not join a government with him at the helm under any circumstances or terms. Liberman and Lapid have already made good on their pledge after each of the three consecutive elections held in 2019 and 2020. As for Saar, he quit Netanyahu’s Likud party last year to run on an “anyone but Netanyahu” ticket. He has since declared repeatedly that anyone seeking Netanyahu’s reelection need not bother voting for his New Hope party.

Bennett is the only one maintaining ambiguity about his day-after plans. He declares at every opportunity that his aim is to “replace Netanyahu,” but deflects all questions about whether he would join a Netanyahu-led government with the mantra that he does not rule out anyone. Bennett does not want to jeopardize his support from voters who still want Netanyahu to remain in power; at the same time, Bennett does not want to lose the support of those who are sick of the prime minister. Bennett is sitting on the fence, hedging his bets.

In person terms, Bennett despises Netanyahu as much as the other three do. Bennett and his leadership partner, former Justice Minister Ayelet Shaked, have been personae non grata at the residence on Balfour Street for years. Politically, he fears being labeled as the man who brought down Netanyahu after some 15 years in power. Bennett knows that his only sure path to the premiership runs through the Likud, by far and consistently Israel’s biggest party; he also knows that he would never be forgiven for unseating its leader, who still commands unrivaled popularity and loyalty. Of the four rivals, Bennett is the one who will face the toughest dilemma March 24.

Poll results aired Feb. 2 on Radio 103FM say a Netanyahu-led coalition comprised of the Likud, the two ultra-Orthodox parties and Bennett’s Yamina are on course to win the equivalent of 61 Knesset seats — the slim majority Netanyahu covets with all his being. Would Netanyahu offer to share power with Bennett in a rotating premiership? Could Netanyahu be trusted to keep his word after signing a power-sharing rotation agreement in April 2020 with Blue and White party leader Benny Gantz only to violate it within weeks?

Liberman was Netanyahu’s right hand in the 1990s, helping him take over the Likud and win the 1996 elections. He served as the first director of the Prime Minister’s Office. Saar was Netanyahu’s Cabinet secretary toward the end of his first term, remaining a staunch loyalist at Netanyahu’s side, helping him form and dismantle governments. When Netanyahu was leader of the opposition in the Knesset, Bennett served as Netanyahu's chief of staff from 2006-2008. Lapid never directly worked for Netanyahu as he never was in the Likud, but did serve as finance minister in Netanyahu's government from 2013-2014, when Netanyahu fired him. These four put together cannot come up with a single kind word to say about Netanyahu, and this is exactly what scares him — a combined plot to bring him down.

The four party leaders themselves are longtime associates. Liberman and Lapid have been friends and allies for a long time, coordinating many of their political moves in recent years. Liberman is also close to Saar, both going way back as Likud stalwarts. Lapid and Saar also share mutual respect (although they did spar against each other in the past), and the same goes for Saar and Bennett, although they are both currently vying for the same electorate and trading blows. Most surprising is the budding relationship between Lapid and Bennett. In 2013, the two unlikely figures — one centrist and secular, the other right-wing and religious — forged what was dubbed “a brotherhood,” forcing Netanyahu to bring them both into his government.

Netanyahu suspects that Liberman is the operations officer of this quartet, its ideologue and the man supposed to coordinate and organize its activity following the elections. The prime minister’s greatest concern is that the four have already decided on some sort of joint move. According to bits of information and conspiracy theories reaching Netanyahu's office, the Lapid-Liberman-Saar triumvirate will tempt Bennett with an offer of a power-sharing deal. The term of the next government would be divided in three, with Saar, Bennett and Lapid each serving 18 months as prime minister, and Liberman as finance minister and acting prime minister as needed. This constellation would enable the three to tempt Bennett into ignoring Netanyahu’s expected ardent courting and lend a hand to his removal. Does such a plan exist? In theory, of course. We should find out March 24.

Meanwhile, Netanyahu continues to count on the widespread coronavirus vaccination operation as a powerful electoral lever. He enjoys full credit for obtaining millions of vaccines for Israel ahead of most countries in the world, for the effective inoculation of some 80% of the 60-plus group and the fact that Israel leads the world in the number of those vaccinated per capita. However, not everything is going his way. A series of government missteps, many politically motivated, have eroded the achievements of the mass vaccination program, with the daily number of those testing positive for the virus remaining at an unacceptably high level, a stubbornly high level of seriously ill patients and deaths, world record lockdown days and a harsh economic crisis.

Netanyahu nonetheless is well ahead in the polls, even increasing his lead slightly. His plan is simple: to complete the vaccination drive by mid-March, declare a resounding victory over the coronavirus scourge, throw a party and free the economy and school system of all restrictions — all in a week or two before the elections. The vaccination campaign could net the Likud 40 seats, Netanyahu boasted at a leaked closed-door Jan. 14 meeting. History, and statistical data, show that Netanyahu’s boastful political forecasts sometimes come true.