Area Bedouins protested this morning against the Jewish National Fund's plan to plant trees on land they use for agriculture. 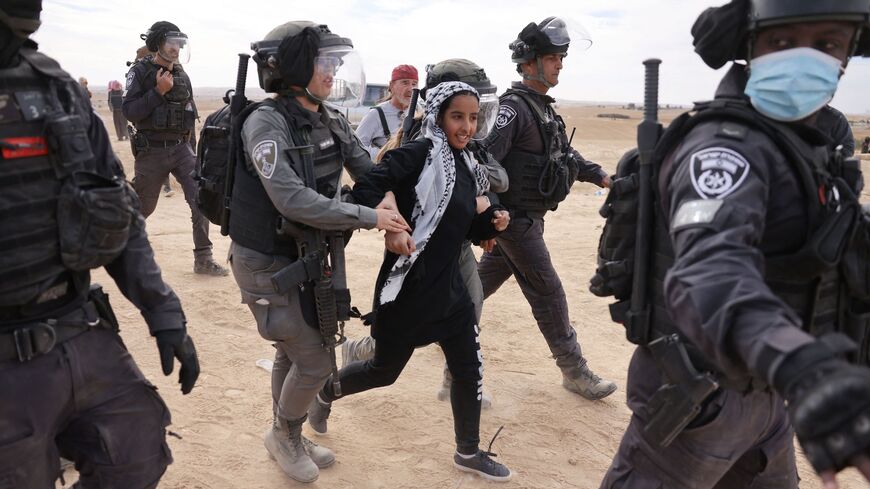 Israeli police detain a young woman as Bedouins protest in the southern Israeli village of Sawe al-Atrash in the Negev Desert against a forestation project by the Jewish National Fund on Jan. 12, 2022. - AHMAD GHARABLI/AFP via Getty Images

Tensions continue to rise Jan. 12 in the Negev Desert region in the south of Israel. Dozens of Israeli Bedouins protested this morning against the Jewish National Fund advancing its forestation plan near the unrecognized Bedouin village of Sawa. The protesters threw stones at the security forces that accompanied the forestry teams. Police responded with stun grenades and arrested at least 10 of the protesters. Police are reportedly now blocking residents and activists from reaching the area.

Far-right Knesset member Itamar Ben-Gvir of the nationalist Jewish Power party arrived at the scene this morning. He had said earlier that he intended to participate in the planting even though this is supposed to be a year of rest for the land, according to Jewish tradition. Ben-Gvir tweeted that in order to "save the Negev," he got special permission to plant from prominent pro-settler Rabbi Dov Lior. Upon arrival, Ben Gvir was turned away from the site by authorities, and eventually planted one tree a significant distance from Sawa.

Protests started Jan. 10, when Bedouins and political figures expressed their objections the JNF plan to plant trees on an area of 5,000 dumans (1,250 acres) along the Anim stream. Tractors arrived at the area Jan. 11 for the first phase of the plan, which includes clearing two land plots that are currently being used by the Bedouins for agriculture. Bedouin farmers had apparently planted wheat there only a few months ago.

Dozens of Israeli Bedouins who arrived at the area started throwing stones at passing vehicles and then at police forces when they arrived. A car belonging to Haaretz journalist Nati Yefet, who was covering the events, was stolen and torched. Some of the demonstrators tried to attack Yefet and two police officers were lightly injured in the clashes. A train conductor had to stop for stones on the railway. Police detained 18 boys aged 13 to 15 for throwing stones.

Several Likud Knesset members and activists arrived at the scene Jan. 11 to express their support of the planting as an expression of Zionist ideals. "No one will tell us where and when we are allowed to plant trees in the land of Israel. It is our land," tweeted the party.

Political leaders and activists from both Arab parties — the Joint List and Ra’am — slammed the JNF plan as endangering the livelihoods of the local Bedouin families. Bedouins in the area had previously complained that forestation works were destroying their farming zones.

The JNF claimed it has been has been planting trees in the Negev and across Israel for many years and that the current forestation plan was made in accordance with a 2017 government decision.

The issue seems to be turning into a political crisis, as many of the Bedouins living in the region are supporters of the Ra’am party, which is part of the coalition. Considering himself a representative of the Bedouins in the Negev, last May Ra’am leader Mansour Abbas had conditioned the party’s entry into the coalition on the government regularizing several unrecognized Bedouin villages.

Abbas tweeted Jan. 10 that former Prime Minister Benjamin Netanyahu had "agreed to stop planting in the Negev in 2020. There is no reason to resume this today, especially since we are now promoting a fair outline that will allow Bedouin citizens to earn a decent living. They do not invade the lands! They were born here and will remain here. A tree is no more important than a human being."

Foreign Minister Yair Lapid called to halt the works Jan. 11 until a peaceful solution is found. "Like the Netanyahu government stopped the forestation works in 2020, we can stop it and reassess the situation. The government of change is committed to solving the Bedouin problem and settling the [unrecognized villages] situation in the Negev. Politicians on all sides need to calm down instead of feeding the fire. I condemn the violence on the ground and support the activities of the police to restore public order," he tweeted.

Reports this afternoon said preparation for the planting has been concluded as scheduled despite the clashes. Welfare Minister Meir Cohen, who is in charge of regularizing the unrecognized Bedouin villages in the Negev, said that the sides will sit down tomorrow for intensive talks to find a solution to the issue ahead of the next phase. Cohen noted that while planting trees on its territory is a supreme right of the country, such activities must be conducted in a responsible manner, which is why the issue at hand must be reexamined. He also said he is in contact with the parties involved to reach a solution.