Why Israeli Bedouins reject tree planting in their villages

Plans to plant trees near Bedouin villages are opposed by local residents and environmental groups. 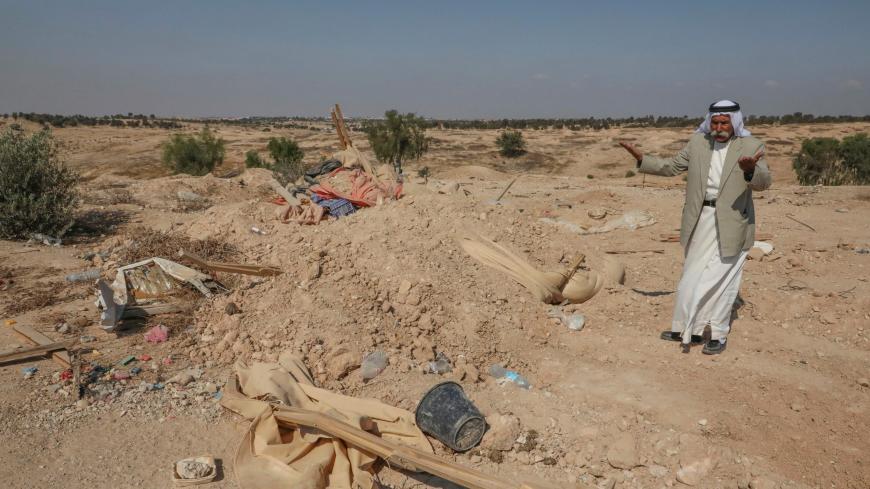 Sheikh Sayiah al-Turi, a Bedouin head of an unauthorized village in the Negev, gestures in al-Araqib village near the southern Israeli city of Beersheba after casting his vote during the Jewish state's parliamentary election on Sept. 17, 2019. The Bedouins of the Negev live on the margins of Israeli society, often in poverty. Like 34 other villages in the region, the village of al-Araqib, which has no access to public water, no school or transport, is not recognized by the Israeli government. - HAZEM BADER/AFP via Getty Images

The inter-ministerial committee on planting trees in the Negev region convened July 13 to discuss a development plan for an area near the Bedouin townships of Segev Shalom and Abu Talul. According to reports in the media, the committee approved, for the time being, only partial implementation of the plan. However, environmental groups and representatives of the Bedouin community in the vicinity are warning against the plan and also against the general policy of greening the desert.

The vision of planting trees is embedded in Israel’s modern history. At the beginning of the 20th century, pioneers from Europe and Russia struggled to dry up the swamps up north and rid the region of malaria. They planted eucalyptus trees and turned the swamps into fertile agricultural lands. After Israel was established in 1948, its leaders committed to making the desert lands in the south flourish. It was this vision that turned Israel into a pioneer in the field of water management and drip irrigation.

The Jewish National Fund was entrusted with the mission of planting trees across the country and of making the desert flourish. For many Israeli Jews, this was, and still is, the ultimate expression of Zionism. This public organization argues that the tree-planting vision fits perfectly with the global call for more trees as means of reducing carbon dioxide emissions and combating climate change. The fund's leaders say their mission has to do with planting, with no politics involved.

That being said, not all environmental groups agree with that approach. Several of them claim that what was right in the early years of the State of Israel is no longer true. They claim that planting trees in the Negev desert would alter this unique habitat and damage the fragile ecological system. For them, the desert vegetation should be preserved, not turned into a forest. The green groups also warn that species typical of this region would disappear in favor of new species attracted by the man-planted trees.

The Society for the Protection of Nature in Israel told Al-Monitor that Israel is characterized by a variety of habitats of different ecosystem types that sustain themselves without human intervention. In many of them, there are no trees at all naturally. "Initiated planting involves transforming the ground, bringing in tractors and stripping dirt embankments,’’ the office of the society's spokesperson said. These operations, together with spraying and fertilizing, cause damage to animals such as birds of prey, lizards, butterflies and wild bees as well as to indigenous plants, the society said.

And then there are the Bedouin villagers in the Negev. The ongoing battle between the Bedouins and Israeli authorities goes back many years, and is mostly focused on what is called "unrecognized villages.’’ These are small villages constructed without permits, thus without any regulated connections to the state’s water, electricity, sewerage, internet and transport infrastructures. The Bedouins say they have lived there for hundreds of years and that they are cultivating the lands of their forefathers. They blame Israel for blocking demands for construction permits and urban planning. Israel argues it is offering them other solutions, in authorized villages. Several governments have tried to resolve these issues, with only partial success.

Addressing the multitude of problems involving Bedouins in the south of Israel, Economy and Industry Minister Amir Peretz has introduced a development plan for new industrial zones in the south with the goal of fostering the integration of the Bedouin population into the national workforce. This plan, however, would essentially improve the situation of Bedouins in authorized localities.

The tree-planting plans only escalate disputes with authorities and increase feelings of discrimination perceived by the Bedouins. The Bedouins argue that the state promotes these tree projects as means of weakening their claim on their forefathers’ agricultural plots, saying the plans do not have the essential aim of making the desert flourish but rather to prevent Bedouin settlement. This means that at least on the subject of trees, the claims of the Bedouins converge with the viewpoint of the green groups.

In 2015, the nature protection society petitioned the court to rule against the Negev-planting policy. As a result, authorities established an inter-ministerial committee in charge of supervising such plans. The committee includes representatives of the Agriculture Ministry, the Environment Protection Ministry and the Israel Land Authority, as well as representatives from state planning bodies. Only this committee that can authorize new planting plans in the Negev.

Following the July 13 meeting, the Israel Land Authority said it would agree to uproot trees in areas where the government decides to regularize unrecognized Bedouin villages. In other words, trees already planted, and trees set to be planted soon, would be uprooted if the state establishes new land zoning in disputed areas. If a Bedouin unrecognized village is redefined as recognized, the trees would be removed. This is particularly pertinent to the Abu Talul township, which is in the process of being regularized. This solution might respond to the fears expressed by the Bedouins, but certainly not the worries expressed by environmentalists.