A unique agreement with the State offers a Bedouin tribe in the south of Israel real ownership of its land, enabling it to rent out space for the construction of a giant solar plant. 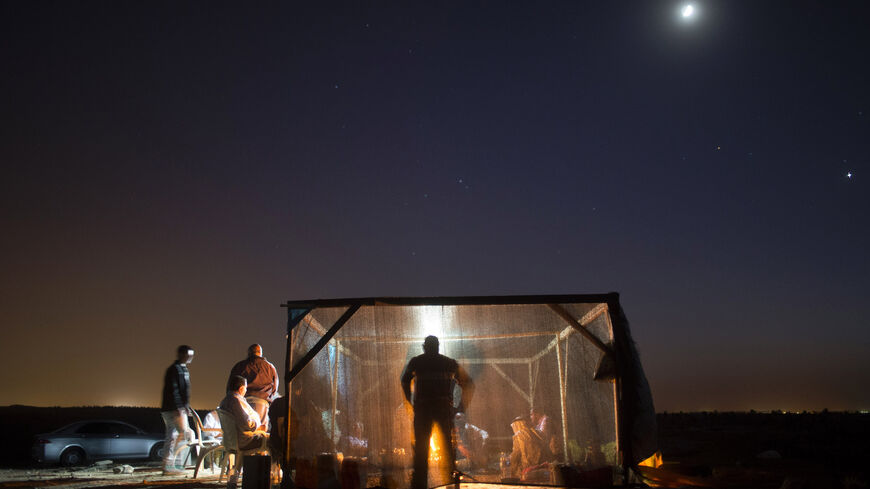 Bedouin men eat their dinner in a tent on Oct. 9, 2013, in the Bedouin village of Al-Arakib, Israel. Roughly 200,000 Bedouins live in the Negev desert, with about half living in the seven Israeli government-built townships in the northeast of the Negev and half in unrecognized villages, which lack basic services such as clean water, electricity or sanitation. - Uriel Sinai/Getty Images

Land ownership is still one of the most pressing issues facing the Bedouin population of Israel’s southern Negev Desert. The Bedouin tribes living there have been waging a yearslong struggle against the state over land ownership, though the courts have ruled against them in most cases.

Bedouins often settle in makeshift structures throughout the Negev and, at least according to the state, use these structures to claim ownership over large swathes of land. Another dispute pertaining to land ownership and the new villages constructed without permits revolves around infrastructure. Most of these temporary villages have no basic infrastructure, including water, electricity, sewage, etc., simply because their status is in question.

Over one-quarter of a million Bedouins live in the Negev, including 80,000 who live in unrecognized villages on disputed lands. As of today, there are some 2,800 lawsuits pending over approximately 600,000 dunams of land.

An agreement signed recently between an Israeli solar energy company and one of the Bedouin families in the Negev offers at least a partial solution to both problems. Marom Energy is planning a solar energy project in the Negev on 150 dunams of private land owned by the Anami family. Its goal is to provide electricity to the region surrounding the city of Beersheba, where many of the Bedouin villages without infrastructure are located.

The project became possible after the Anami family/tribe joined an agreement to settle Bedouin land claims in the Negev. It waived its claim to hundreds of dunams of land in exchange for having the remaining land listed in its name in the state registry.

The solar project will be built on land belonging to the family, which will collect rent from Marom Energy. The project will then provide 13 megawatts of electricity to the region, enough to meet the needs of many of the Bedouin settlements in the region. The cost of the project is 45 million shekels ($13 million). It has already been approved by the District Committee for Planning and Construction.

Marom Energy will earn a predetermined rate for the electricity it produces for a period of 23 years from when it connects to the national energy grid. It is only expected to begin producing electricity in January 2024 due to the limitation of network conductivity.

The CEO of Marom Energy Yaniv Weidenfeld said that the company is in the planning and approval stage for four additional projects on land owned privately by Bedouin families, which would produce a total of 35 megawatts of electricity.

Weidenfeld said that these projects are in keeping with the company’s vision of social entrepreneurship and a desire to be inclusive of the local Bedouin population. He says that the rent paid for the land used for his company’s solar energy projects will improve the quality of life of the local population by providing it with an income for nonagricultural lands.

Marom Energy is not one of Israel’s biggest energy companies. Nevertheless, it gained attention recently for an enormous deal that resulted from the Abraham Accords. The company, which is controlled by the Gandyr Foundation of Judith Recanati, recently acquired 30% of the stocks of the Moroccan renewable energy company Gaia Energy at an estimated cost of 70-80 million shekels ($20-23 million).

The immediate significance of this is Marom Energy’s investment, through its partner company Gaia Energy, in 10 renewable energy projects in Morocco, including four in very advanced stages. It is doing this in partnership with huge international corporations for a total investment of 1.2 billion euros.

Projects scheduled to be completed within the next three years include a wind energy farm slated to produce 85 megawatts. Its partner in this project is the Italian energy giant Enel, which is one of Europe’s largest electric companies. Financing for the project is in its final stages, with Enel holding 85% of the project. Another interesting initiative is a wind farm located south of Tangier, planned to produce 600 megawatts.

As abovementioned, Marom Energy is a rather new player in Israel’s solar industry. In the past few years, several solar fields have been constructed in different parts of the Negev. Most of them are of small size and located on lands belonging to kibbutzim or community villages, in the framework of special permissions by the State to convert some percentage of agricultural lands into solar uses. The agreement signed with Marom Energy would be the first field to be built on lands owned by Bedouins.

In the framework of the 2015 climate agreement and the goals set by Israel for reducing CO2 gas emissions, Israel accelerated over the past three years investments in solar energy.

Last December, the inter-ministerial tenders committee announced that Shikun and Binui holdings won the bid for the construction of Israel's largest-ever solar energy field, near the southern town of Dimona. The new field should produce 300 megawatts of electricity from solar energy using photovoltaic technology. The project also includes a 210 megawatt-hours storage facility.