How this solar energy project will meet Palestinians’ electricity needs

The Palestine Investment Fund is carrying out a project to build solar energy power stations in the Palestinian territories in order to meet electricity needs. 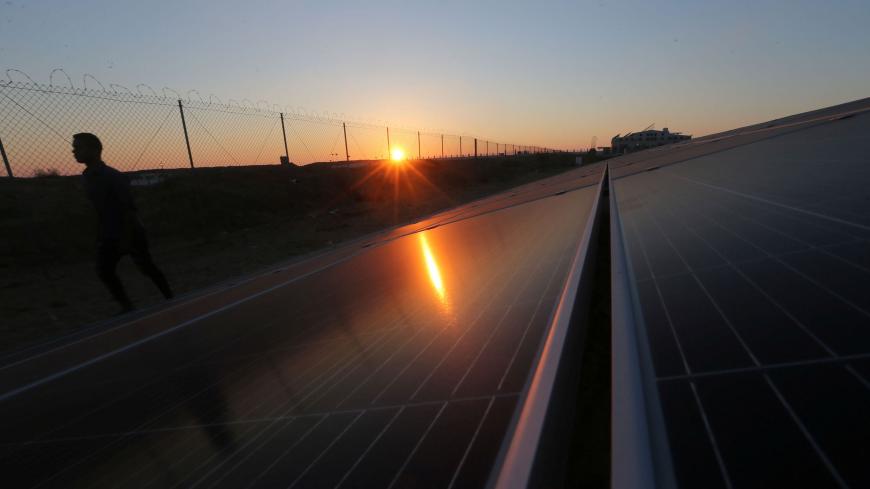 In statements to the official Palestinian station, Voice of Palestine, Mustafa added that a station in Jericho has been completed and is ready to start operating.

These stations come as part of a project that aims to build solar energy power stations in Jenin, Tubas and Jericho, to meet local electricity needs — most of which is imported from Israel, Jordan and Egypt. The PIF first proposed the Noor Palestine project back in 2016, which is expected to be completed by 2026 at a total cost of $200 million, producing up to 200 megawatts, i.e., 17% of the energy needs of Palestinians. The latter consumes around 1,300 megawatts per day: 850 in the West Bank and 450 in the Gaza Strip. Meanwhile, some 89% of this amount is imported from Israel.

In May 2019, the PIF had announced that a solar energy power station has been successfully built in Jericho, as part of the Noor Palestine’s first phase. The Jericho station has a production capacity of 7.5 megawatts produced by 20,000 solar panels over a surface area of 100,000 square meters.

Massader for Natural Resources & Infrastructure Development, which the PIF established and is in charge of carrying out the project, signed on Oct. 28 agreements with the Palestinian National Bank, the Istishari Arab Hospital and Birzeit Pharmaceuticals, under which they would be provided with the electricity generated by the Jericho solar power station.

In his statements to Voice of Palestine on Oct. 28, Mustafa added that the Noor Palestine project is part of the Palestinian government’s plan for economic disengagement from Israel, and it would ultimately help the Palestinian territories to do without electricity purchase from Israel. He noted that the next stage of the project entails the building of a solar power station in Jenin.

Palestinian Energy and Natural Resources Authority chairman Zafer Melhem told Al-Monitor that the project is included in the Palestinian government’s strategic plans to benefit from and diversify renewable energy sources to meet the electricity needs of Palestinians.

He added that the Energy and Natural Resources Authority offered all necessary facilitations to the PIF and other investors to implement their projects, such as granting them the needed permits for construction and connecting the stations to the power lines of the electricity distribution companies.

Director-General of the Northern Electricity Distribution Company in the West Bank Assaad Sawalma told Al-Monitor that his company is among the Palestinian parties that would benefit from electricity expected to be produced by solar power plants, notably those that are under construction in Kafr Dan in the northwest of Jenin. Their production capacity is expected to reach 5 megawatts. He noted that electricity will be pumped through the company's own networks to reach consumers.

Sawalma added that the electricity generated from solar energy is currently sold at the same rate as regular electricity — 50 agoras ($0.15) per kilowatt. He pointed out that his company has nothing to do with this pricing, which is set by the companies producing electricity.

The Palestinian Energy Authority and the PIF gave the primary benefit of the electricity produced in the first phase of the Noor Palestine project to institutions that serve a large segment of citizens, such as schools, mosques, hospitals, big production factories and street lighting plants.

For his part, chairman of the civil association the Palestinian Solar and Sustainable Energy Society Anwar Hilal told Al-Monitor that the Noor Palestine is among the largest projects in energy production using clean ways. He expected the project to meet 50% of the energy needs of Palestinians in the coming years.

Helal called on government institutions and investment companies to take advantage of power generation using natural untapped resources, specifically wind and buried waste. He noted that such projects require large capital, saying, “However, the money can be recovered within three to five years [through revenues], and the projects can become profitable for investors. Besides, they provide many job opportunities.”

Investment in renewable energy in the Palestinian territories has not been limited to Palestinians. The Turkish Zorlu Holding signed on Aug. 29 an agreement with the Jerusalem District Electricity Company to sell it the electricity supply that the solar energy station — which the Turkish company will build in Jericho in the next months — will produce. The expected amount is 1.8 megawatts.

Ayman Ismail, general director of the Palestinian Energy and Environment Research Center, a research and development organization affiliated with the Palestinian Energy Authority, told Al-Monitor that Palestinians have been increasingly trying to benefit from renewable energy over the past years. The main obstacle facing several investors is the lack of sovereign guarantees from the government. These guarantees are paid by the government to banks to loan investors the money needed for such projects.

Ismail said that a European donor, whose name he refused to reveal, pledged to pay $20 million in sovereign guarantees to investors before the end of the year to launch projects that would help Palestinians invest in the energy sector. These projects are expected to produce 130 megawatts of electricity in the coming years.