PA wants to break free from reliance on Israeli electricity

Jordan and the Palestinian Authority are about to sign an agreement under which the kingdom would supply electricity to the West Bank. 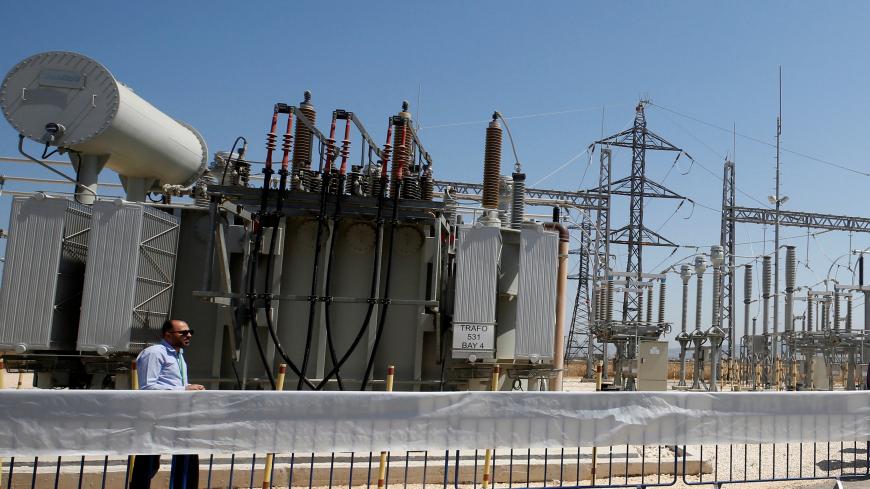 Economy and trade
Infrastructure
May 10, 2019

The project comes as part of the PA’s efforts to diversify electricity sources rather than rely on only one. The PA imports more than 90% of its electricity needs from Israel. For the rest, it relies on a Jordanian line that feeds Jericho and on solar energy. The new project will serve the West Bank only — excluding the Gaza Strip.

The energy authority's acting chairman, Zafer Melhem, told Al-Monitor, “There are no restrictions on Palestine to import electricity from anywhere outside the country. The agreement confirms our intention to decrease reliance on one source of energy and to promote diversification.”

Melhem noted that the strategic aim of the project is to diversify sources of energy and decrease reliance on Israel. The plan is underway, especially as the Palestinian territories are producing 40 megawatts of power locally and through solar energy.

This would not be the first time the PA and Jordan coordinate in the field of electricity importation. Melhem said that in February 2008, Jordan began supplying electricity to Jericho and al-Aghwar governorates through the Sweimeh station that has a 26-30 megawatt capacity. He said the aim of the project is to maximize the amount of energy and electricity imported from Jordan.

He added that a joint Palestinian-Jordanian team is currently working on completing the project paperwork and documents such as plans and specifications. Then the agreement would be signed between the two sides to organize the project’s technical and commercial aspects.

Melhem said the new agreement with Jordan will include increasing electricity importation through Sweimeh station and through a new connecting point that was recently inaugurated, al-Karama station, between the Jordanian Karameh town and the Palestinian al-Auja town in Jericho.

Melhem said the amount of electricity involved in the project will feed Ramallah and Jerusalem, in addition to Jericho. He said funding for the extension of transport and connection lines will be sought after the papers are finalized.

Melhem said that if all parties, including Israelis, give their approval for the project to begin after funding is in hand, the project would start operations a year after work begins. He said the financial value of the project is estimated at $12 million.

Melhem added, “Some donors promised to study the project, and some financial allocations are provided by global banks, including the World Bank and the European Investment Bank. We will resort to them to discuss the possibility of funding the project.” He did not name the donors.

After the project is completed, it is supposed to cover 10% of the electricity needs of the West Bank, and as a result, electricity prices for citizens could drop. He said, “In any project, we mainly care about the electricity price, which should be less than the Israeli price.” He said the PA buys each kilowatt hour from Israel at the price of 38 agoras (11 US cents).

Israel is the main electricity supplier for the West Bank, via medium-voltage lines through more than 235 medium-voltage connection points supplied from main Israeli transmission stations, such as Atarot and East Jerusalem station, according to Melhem. “Electricity is distributed to Palestinians through local distribution companies such as the Jerusalem Electricity Distribution Co. and the North Electricity Distribution Co. The monthly consumption bill ranges between 170 million shekels [$47 million] and 200 million shekels [$55.5 million] per month,” he said.

The PA, represented by the public Palestinian Electricity Transmission Co., signed an agreement with Israel on May 1, 2018, enabling the Palestinian government to invest in and build modern electrical transmission grids in the West Bank. This agreement allows energy-generating projects to be connected with the Israeli grids as well as with Palestine’s neighboring Arab countries such as Jordan and Egypt.

The energy authority is working on completing the power plant in Jenin in the northern West Bank, which is slated to produce 455 megawatts, or 40% to 50% of the electricity consumed in the West Bank and Gaza. Work on the Jenin plant began in November 2016. The Palestine Power Generation Co., in cooperation with the Palestine Investment Fund, the Palestine Company for Investment and Development and the Palestine Telecommunications Company, have funded the $620 million project to build the Jenin power plan, which will be operational in 2021.

“We are in dire need of this project because it serves the area under our jurisdiction,” said Ali Hamouda, the Jerusalem Electricity Distribution Co. assistant general manager for strategic development and planning.

“This project is a continuation and development of the connection line between us and Jordan, inaugurated in 2008, and which will provide us with about 30 megatt capacity ,” he told Al-Monitor.

He added, “The new project meets the growing demand for electric loads in the Jericho area in light of major projects being constructed in the governorate, such as industrial projects, Al Istiqlal University, which is opening new buildings, and the Jericho Agro-Industrial Park. These projects now need a capacity of 50 megawatts.”