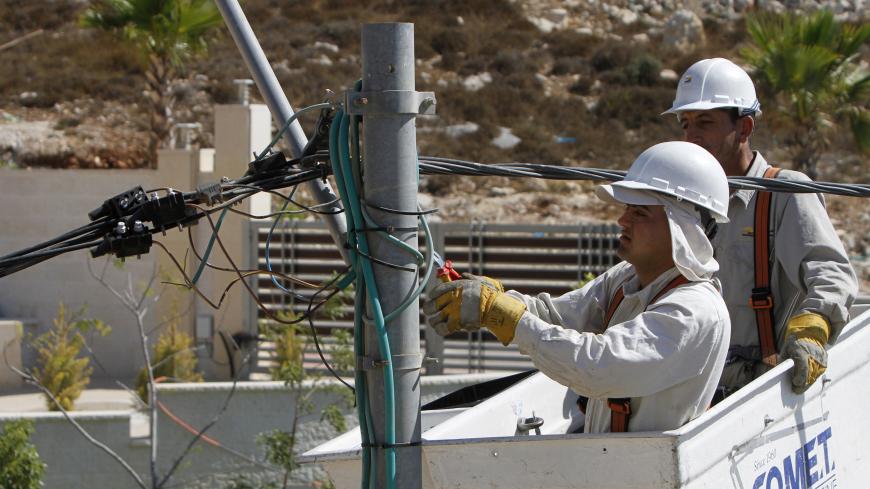 Hisham Omari has one of the most difficult jobs in Palestine. As director general of the Jerusalem District Electricity Company (JDECO), his job is to supply energy to some 280,000 customers spanning four districts. The company, the largest in Jerusalem, has become a national icon for Palestinians and a source of national pride.

The private/public company, which has been operating under an extended concession, has the exclusive rights to supply electricity to the districts of Jerusalem, Bethlehem, Ramallah and Jericho. In an interview with Al-Monitor, Omari explained the complicated legal and administrative nature of his work. “We work with the Palestinian Authority in Areas A and B and with the Israeli civil administration in Area C and with the Israeli government in the annexed areas of Jerusalem.”

Omari explained that the company buys most of its electricity from Israel; although in recent years, they have been supplying some of their customer’s energy needs with power coming from Jordan. Jordanian electricity is cheaper and strategic for Palestinians. “We are hoping to increase the electricity we buy from Jordan, even though Israel restricts that energy to be only used in the Jericho district.”

The 8.5-kilometer (roughly 5-mile) electricity line from the Jordanian town of Sweimeh across the King Hussein Bridge cost $6 million and was provided to the people of Palestine with a $5 million grant from the Islamic Development Bank and $1 million from Norway. Power began to flow to the tune of 20 megawatts to Jericho customers in February 2008 by way of JDECO.

The Jericho district will also be a new source of energy. An agreement to help build solar energy farms was signed with the Turkish Zorlu Energy in July 2017. Omari said that the Turkish company made a very generous offer to the Palestinians. “As part of its corporate social responsibility, Zorlu provided us with a very generous offer to help generate solar energy at extremely good rates,” he said. He expects the new solar farms to help cut the energy needs of JDECO by 20%.

Despite the positive changes that are taking place with Jordan and the private Turkish company’s solar support, JDECO is still facing huge challenges dealing with Israel and with the Palestinian government.

Omari noted that the company is suing Israel for 500 million shekels ($145 million) in lost revenues due to encroachment on the company’s concession. “They have connected the light rail line with the Israeli Electricity Corporation, even though the rail line runs through our areas of concession. There are many other locations in which Israel supplies power in areas that are part of our concession," he added.

JDECO has had a monopoly over supplying electricity in the larger Jerusalem area for nearly 100 years. Its first concession was signed during the British Mandate and has been extended under Jordanian rule. In 1988, Jordan extended the concession for another 60 years, but Israel has only agreed to an extension until 2030.

The concession allows the company to have a monopoly in supplying electricity on condition that the price to the customers is regulated. Israel decides the cost to customers in areas under its administrative control (Jerusalem and Area C), while the Palestinian government decides the price to Palestinian customers living in the four major cities in Area A and to those living in Area B. Areas A and B were created as part of the Oslo Accord. The accord conferred to the Palestinian government administrative and security control over major Palestinian cities and administrative control over the surrounding towns and villages marked as Area B.

Omari is also not very pleased with JDECO’s relations with the Palestinian government. A verbal promise made in 2001 by the late Yasser Arafat to spare Palestinians in refugee camps the cost of energy has added to the debt of the company. All efforts to reverse this decision have failed.

Ever since the occupation and the Israeli unilateral annexation, JDECO has been seen as an important Palestinian institution. But in recent years, it has been hobbled by debt and its effectiveness has been greatly reduced. JDECO is one of the biggest employers in Jerusalem, with more than 1,000 Palestinians working for the company, according to Omari. As the struggle for Jerusalem and its identity intensifies, the role of a company this large becomes crucial in defending Palestinian national identity and the rights of Palestinians in and around Jerusalem.