The representative of the unrecognized Bedouin localities is not encouraged by the shelving of the governmental relocation plan: "In the end, the Bedouin will be forced to accept a solution that they do not want." 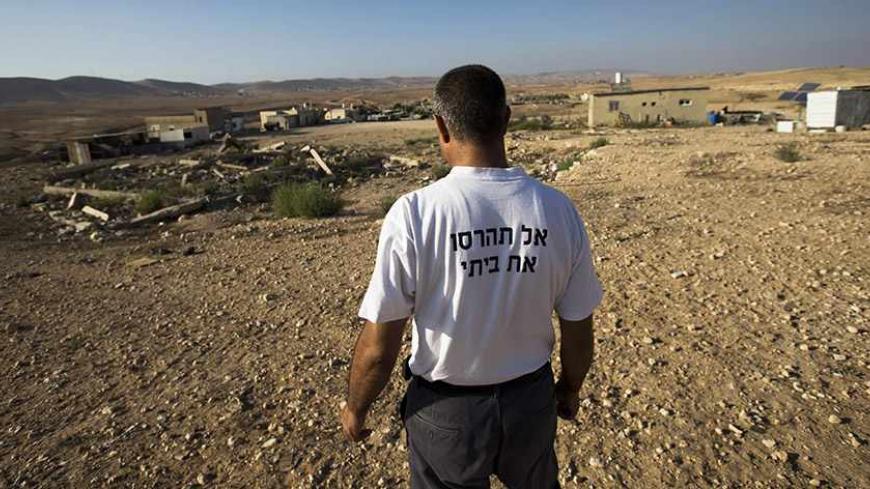 A Bedouin man, wearing a T-shirt reading which reads: "Don't destroy my home," stands in the village of Alsra, one of dozens of ramshackle Bedouin Arab communities, Negev desert, Israel, Aug. 18, 2013. - REUTERS/Ronen Zvulun

The Begin-Prawer Law has been shelved. Fear in Israel of a widening rift with the Bedouin community and the demonstrations they held against the controversial plan have played their part. The person who initiated halting the current effort to organize Bedouin settlement in the Southern Negev region is one of the two people signed on to the law: Likud member and former minister Benny Begin. Having witnessed the intensity of the opposition to the law from both the right and the left, Begin recommended to Prime Minister Benjamin Netanyahu that he put a hold on all moves that require its approval. “We did the best we could,” said Begin at a news conference he organized on Dec. 12, “but we have to face up to reality.”

So now what? It is obvious to all the parties that they have to come up with an alternative plan. As long as the current situation persists, the state is unable to approve the unrecognized Bedouin villages in the Negev and will continue to demolish illegal buildings constructed there. But in an interview with Al-Monitor, the Chairman of the Regional Council for Unrecognized Localities Atia al-Assam makes it seem as if the path to a solution that would be agreeable to all the parties will not be easy. He says that the law's having been shelved is just a respite in a larger struggle over the future of the Bedouin population. It wasn’t the demonstration against the plan that led to it being frozen, he said. Actually, he credits opposition from the right: “The people who really had an impact on the plan were from the right-wing parties. They explicitly said, ‘We’re giving too much to the Bedouin. They don’t deserve it.'”

Al-Monitor:  Do you really think that’s why they shelved the plan? Don’t you believe Benny Begin?

Assam:  It’s the main reason. The right-wing parties said that the plan is too favorably inclined to the Bedouin, and that it should be changed into a more aggressive program.

Al-Monitor:  How can you say that? After all, when push comes to shove, this is still a democracy in action. You demonstrated, you made yourselves heard and in the end it didn’t fall on deaf ears. Now they are talking about an alternative plan.

Al-Monitor:  Benny Begin said explicitly that under the current circumstances it would be impossible to implement the plan, and if things continue the way they are going, there could be bloodshed.

Assam:  Benny Begin is a decent man. He was dragged into this situation. When he saw that there were many things about it that he didn’t like, he said, 'I have no part in this.'

Al-Monitor:  What kind of solution would satisfy the Bedouin and put an end to this dispute?

Assam:  We want a solution, but without laws. We want negotiations over every village. If we have that kind of negotiations, there will be a solution.

Al-Monitor:  How do you respond to the claim — which appeared in Al-Monitor's  article by Einat Wilf  — that most Bedouin cannot prove ownership of the land, and that the prevalence of polygamy in the community is also an obstacle preventing any regulation?

Assam:  The Bedouin have lived throughout the entire Negev. They held the land during the British Mandate and Ottoman periods, and during those times no mandatory authority or Ottoman official ever came to them and said that the land is not theirs. The determining factor was that they were settled on their own land the entire time, even before the state [of Israel] was founded. The state decided not to recognize those villages and not to mark them on its official maps. Today, the Bedouin occupy just 3% of the entire Negev. As for polygamy in Bedouin society, it has declined considerably these days, and it would continue to decrease naturally if the state would invest in education here. The state does not invest in education and employment in the Bedouin sector. That may be the root of the problem.

Despite this claim, over the last few years the issue of education in the Bedouin sector greatly preoccupied the Israeli education establishment. During a discussion held in the Knesset on the issue a few months ago, the head of the committee, Knesset member Amram Mitzna, requested a report on the situation of education in the sector. The report describes an improvement of the infrastructure and of the number of students eligible for the matrix exams, but there is still a lot of work to be done in this field.

Based on what Assam says, it seems as though the plan may have been shelved, the struggle is not over yet. Encouraged by the temporary success of their demonstrations, Bedouin representatives believe that if they continue with their protests, Israel could abandon the law altogether. But even if the Prawer Plan is stopped, the need to reach agreements will not disappear. Right now, the intention is to reopen the plan and engage in a dialogue that will lead to the formalization of the unrecognized Bedouin localities. However, as long at the fissure between the Bedouin community and the Israeli establishment continues, both sides will suffer from it.

The distrust is so great that some representatives of the population even accuse the government of only engaging in a dialogue with Bedouins who are acting out of personal motives and greed. “The state turns to people who work with the state. … These are well-connected people with personal interests who want to make a profit from this," Assam said.

Al-Monitor:  Are you claiming that Bedouin representatives who maintain contact with the authorities are selling the Bedouin community out?

Assam:  Yes, they want to profit from this on a personal level. They are eager to see their interests protected.

Al-Monitor:  Who are those people?

Assam:  We know them. For example, some of them are from Dahaniya in the Gaza Strip [a village made up of collaborators with Israel]. They were collaborators, and they do not represent us, even though they present themselves as if they do.

Al-Monitor:  So are you saying that no plan will satisfy you, and that a clash between the establishment and the Bedouin is inevitable?

Assam:  I think that in the end, the Bedouin will be coerced to accept a solution that they don’t want. In this system, when you make a plan and say that there is no alternative, that is a forced solution.