With President Donald Trump in the White House, the Israeli peace camp should focus its strategy on highlighting the theft of Palestinian lands for settlement construction. 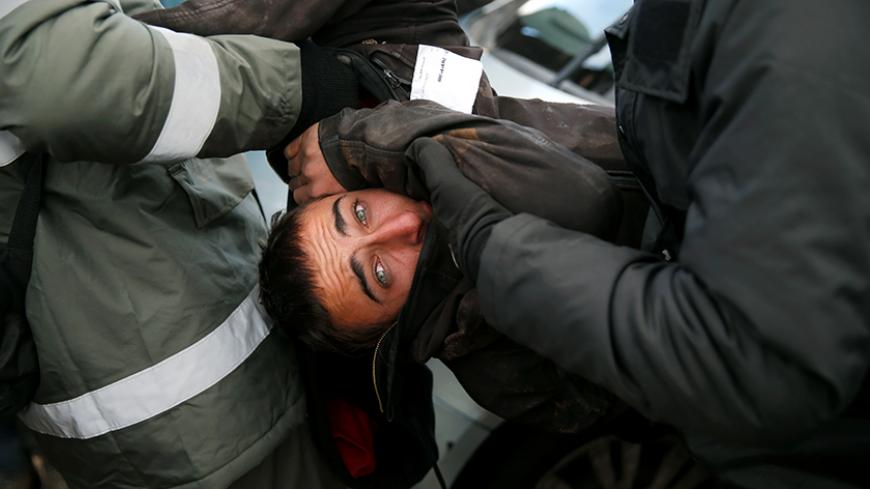 Israeli policemen remove a pro-settlement activist during an operation by Israeli forces to evict settlers from the illegal outpost of Amona, West Bank, Feb. 1, 2017. - REUTERS/Baz Ratner

The White House's recent contention that the existing Israeli settlements in the occupied territories are not an impediment to peace should, it would seem, allay the concerns of Israeli Prime Minister Benjamin Netanyahu as he licks his wounds after the forcible evacuation of Israeli settlers Feb. 1-2 from the illegal West Bank outpost of Amona. After all, that is exactly what Netanyahu has been insisting for years about the settlements. Now, finally, there is a White House occupant after his own heart — a real estate mogul who doesn’t understand how a construction project can be a bad thing.

Like Netanyahu, President Donald Trump is apparently not bothered by the reality that some 2.5 million Muslims have been living for 50 years under a discriminatory occupation. Netanyahu’s problem, however, is that right-wingers, especially those involved in real estate, including Trump, have a red line that must not be crossed under any circumstances: appropriation of someone else’s property. This is the argument that the Israeli left can and should make in the Trump era for pursuing a diplomatic arrangement with the Palestinians.

Anyone who dared encroach upon land owned by the Trump family would quickly find themselves under lock and key. That the Amona settlers lived in their homes for 20 years without paying rent to the Palestinian landowners makes their conduct even more egregious. Any American judge who would agree, as Israel’s justices did, to postpone the evacuation of squatters from Trump’s private land would come in for a tongue lashing by the president. No sane American politician would even consider proposing an amendment to the law legalizing the use of someone else’s private property, as Israeli lawmakers have done by passing the Regularization Law Feb. 6.

Netanyahu would have to look high and low on Capitol Hill to find a single member of Congress who understands the reason for all the fuss over the eviction of 40 families who took over a remote hilltop that the state and the Supreme Court ruled does not belong to them. Even a master wordsmith like Netanyahu would find it hard to make excuses for legislation retroactively legalizing wildcat outposts, having himself publicly warned that the international community would not accept such an Israeli law.

Thus, President Barack Obama’s departure from the White House did not free Netanyahu of the need to choose between his coalition partner Naftali Bennett, head of the right-wing HaBayit HaYehudi and driver of the regularization bill, and the United States. In the short time that Trump has been ensconced in the Oval Office, he has proven that his adherence to the principles of capitalism, including the sanctity of private property, supersedes all other considerations.

As senior Israeli jurists Joshua Schoffman and Malkiel Blass noted in a Feb. 4 Haaretz op-ed, it is a criminal offense under international law to take private property in occupied territory for nonsecurity-related needs, and perpetrators hold personal responsibility if they do so. Schoffman and Blass, who served as deputies to Israel’s attorney general, contend that Israeli constitutional law does not allow legalizing Knesset legislation encroaching on property not under state sovereignty, in this case property belonging to a nonresident who has not entered the state and has not done it harm.

Even before the Supreme Court’s Amona ruling and the eviction notice served on residents of nine homes in the Ofra settlement, Yesh Din and Peace Now in conjunction with Palestinian landowners had submitted a series of requests to the court to evacuate the settlers from private Palestinian land in the occupied territories. As a result, the government can expect a slew of eviction notices to be served on settlers who have built homes on such land.

Last September, Bennett declared that the era had passed for “cobbling together patchwork tactical solutions” to various settlement problems and that he was preparing a “comprehensive reform that would legalize in one fell swoop all the construction in Judea and Samaria and prevent additional evictions.” Several weeks later, Bennett's party colleague and Deputy Minister of Defense Eli Ben-Dahan threatened that dismantling Amona would result in the dismantling of the coalition government. He promised, “If there’s no regularization [of outposts], there will be no government.”

What will members of HaBayit HaYehudi do if the Supreme Court is the one that overturns the Regularization Law? After the justices order the demolition of the hundreds of homes built on private Palestinian land, Knesset member Moti Yogev can reiterate his proposal to raze the Supreme Court with a bulldozer, and Justice Minister Ayelet Shaked will do what is expected of her and issue a condemnation of the ruling. Although stillborn when approved by the Knesset, the law will be an eternal stain of shame in the annals of the Knesset and in the history books of the State of Israel.

The only person who can spare Israel this humiliation is Trump. Israel’s peace camp, instead of attacking him for saying that the settlements are not an obstacle to peace, should change its strategy and underline the damage being inflicted by the prolonged Israeli occupation on the supremacy of private ownership. They should provide him with reliable and updated data about the extent of the settlers’ seizure of private Palestinian lands within the “settlement blocs” and beyond. This is language he understands well.

The evacuation of Amona gave the new president a taste of the concoction cooked up by successive Israeli governments over some 50 years. It also showed the world that when an Israeli government decides to evict Jewish squatters, it knows how to do so without a loss of life. Trump can see that even as the media blew the event in Amona out of proportion, there were no demonstrations on the streets of Jerusalem. It would appear that even the members of the Israeli public who do not identify with the peace camp understand that land theft is villainy, regardless of one's political views.

All recent US presidents, Democrats and Republicans alike, have declared Israeli settlements obstacles to peace. What, however, became of all their talk? From George W. Bush's presidency to the end of Barack Obama's two terms, the number of settlers grew more than fourfold. Some of this flowering occurred on land stolen from indigent Palestinian farmers. Hence, what the current US president says about the settlements and about peace is not so important. What he does about it is far more significant.

There would be no act more appropriate for Trump than to veto legislation aimed at enabling a state to take one man’s property in order to hand it to another. Maybe this would also be the first step enabling the “other” to get a state of his own.

by Murielle KASPRZAK and Joseph SCHMID | AFP | May 26, 2022
END_OF_DOCUMENT_TOKEN_TO_BE_REPLACED