A resurgence of Sunni identity and demonstrations against the government of Iraqi Prime Minister Nouri al-Maliki is weakening Iraqi nationalism and intensifying sectarianism, writes Harith Hasan. 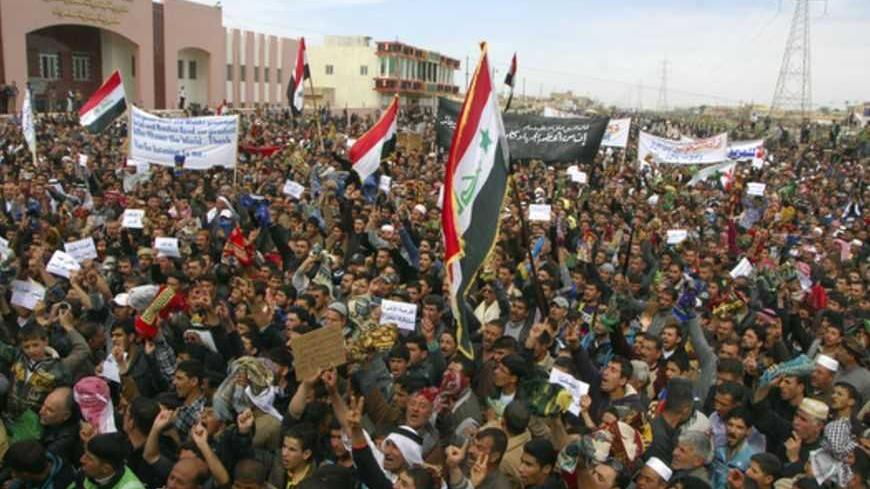 Most Sunni politicians who publicly lead or address the current protests in Anbar, Mosul and other Sunni areas were part of electoral coalitions that identified themselves as nationalist, non-sectarian and even cross-sectarian.

In the last general election in 2010, most of them were running in the Iraqiya coalition, which was defined as cross-sectarian and formally led by the secular Shiite Iyad Alawi. What triggered the current demonstrations was the case of Rafi al-Issawi, the former finance minister whose house was assaulted by security forces, with several of his bodyguards arrested on charges of terrorism. Issawi is among the few Sunni politicians who seemed to have gained a broader base by identifying themselves with the protesters. Others are, for example, Ahmed abu Risha, the former leader of the "Awakening group" which allied with the US army in the battle against al-Qaeda in Anbar. He was a leading figure in the "Unity of Iraq" coalition led by the former Shiite minister of interior, Jawad Boulani.

Recently, Abu Risha identified himself with the protesters, calling for an end to sectarian discrimination by the Iraqi government and unfair treatment of Arab Sunnis. Also, Nujaifi, the speaker of parliament and another leader of al-Iraqiya, told al-Jazeera in an interview that Iraqi Sunnis are a majority in Iraq, denying the Shiite claims of the same. Abu Risha, in another TV interview, maintained that Baghdad is a Sunni city. The protesters' calls last February to "march on Baghdad" symbolized the emerging Sunni narrative in which Baghdad is presented as the "promised land" that must be redeemed by its original owners.

The statistical game about who are the majority and the clash of narratives over space is part of this new atmosphere of increasing sectarianism. It is true that Iraq before 2003 was predominantly ruled by Sunni rulers, but they rarely chose to be identified as Sunni. There was no explicit or coherent Sunni ideology commanding their political loyalty or action. The current Sunnification of Sunni politics comes as a rupture from a long history in which sectarian identification was not appealing among Iraqi Sunnis. In fact, Shiite political groups were more inclined to sectarian identification as a result of long years of exclusion and marginalization, particularly since the coup d’état that took place in February 1963. Shiite parties thought that presenting sectarian categorization to Iraqi politics would consolidate their support base, since their constituency represents the popular majority. This may be exactly the reason Sunnis disliked sectarian categorizations.

Previously, only jihadists and Salafists celebrated and stressed this sectarian identity. Today, it has become part of the new Sunni mainstream. Sunni leaders and protesters appear to be less reserved when they speak about their sectarian community.  Sectarian symbolism is present in the new political expressions of demonstrators, as exemplified by flags of the "Sunni" Free Syrian Army and pictures of the Turkish prime minister. As weeks passed by, the speakers’ discourse became more aggressively sectarian just to be countered by the escalation of sectarian discourse by some Shia groups. It is noticeable that in the last two weeks, the moderate and conciliatory tones initially set by leading Sunni and Shiite clerics like Abd al-Malik al-Sa’adi and Moqtada al-Sadr were weakened.

A Sunni solidarity has been revived by bringing together religious, secular and tribal figures, coordinating or competing in order to represent the sense of alienation the Sunni community feels in post-Saddam Iraq. This dynamic put an end to the identity crisis this community has experienced in the last decade. The rising solidarity — which goes beyond Iraqi borders — will harden sectarian polarization in Iraq and leave no room for cross-sectarian discourse.

Today, Iraq is facing one of its most important challenges that will decide whether this country will survive as one entity or disintegrate into three hostile and competing parts infiltrated and consumed by regional powers. As Syria faces a similar dilemma, the violent disintegration of the two countries might move every geopolitical stone in the region. With this increasing sectarian polarization, Iraqi nationalism is rendered a consumed force that is no longer able to keep the country united. Without reaching a new pact and an acceptable formula for all significant socio-political forces, Iraq will cease to exist as a peaceful and democratic country. Iraqi leaders may well be remembered as an example of how self-centered and improvident politicians have led this economically and culturally rich country to its demise.

Harith Hasan is an Iraqi scholar and author of Imagining the Nation: Nationalism, Sectarianism, and Socio-Political Conflict in Iraq. On Twitter: @harith_hasan.