A prominent actor's disclosure about his daughter's transition has been met with a rare show of support in a conservative society with little tolerance for gender nonconformity. 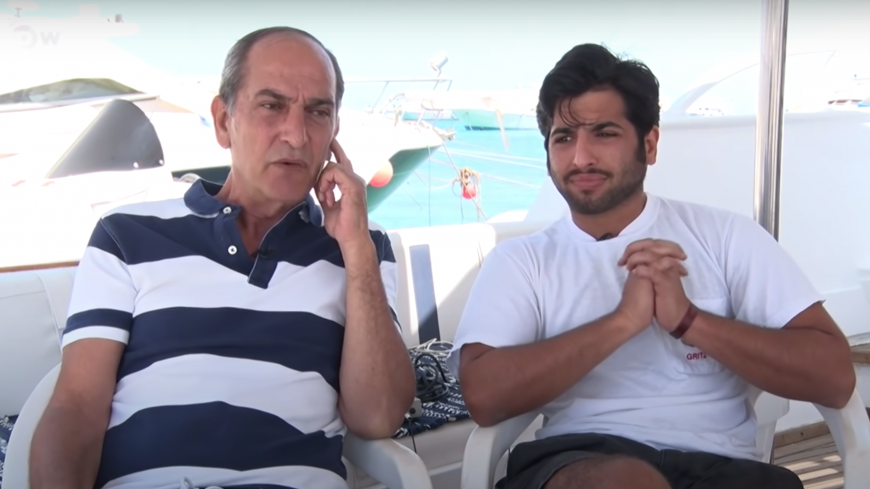 Egyptian actor Hesham Selim and his son Nour are pictured during an interview with DW on May 5, 2020. - YOUTUBE/DW

Egyptian actor Hesham Selim raised eyebrows when he disclosed in a TV interview broadcast on Al-Kahera Wal Nas Channel May 3 that his daughter, Noura, was undergoing gender transition.

“My daughter Noura is now my son Nour; it is God's will,” the actor said. He added that he was not surprised when Nour came out as a transgender person at the age of 18. “The first time I held Noura after she was born, I could see that ‘she’ looked more like a boy than a girl. I always had doubts about ‘her’ gender identity.”

Eight years ago, Nour told his father he did not feel in harmony with his body. “It was very brave of him to speak out as we live in a society where such issues are taboo,” Selim told the show's presenter.

In the conservative patriarchal society, few dare talk openly about gender transition because of the stigma attached to gender nonconformity. Selim nevertheless, expressed support for his son's decision, saying, “As his father, I can only encourage him to live the life he has chosen.”

Nour, who has yet to complete his transition, is facing challenges in changing his gender designation on his national identity card, Selim said in the interview. “Things are extremely difficult for people like my son. I deeply sympathize with families that are going through such an ordeal,” he noted.

While Selim's revelation sent shock waves across the country, it earned him more praise than criticism on social media. Many activists commended his “courage” and expressed their support for him and his son.

One Twitter user expressed doubt, however, that Selim would have gotten the same level of support had he announced that the transition was from male to female. Acknowledging Selim's “bravery,” the activist added, “He has thrown a stone into still waters, causing ripples. His disclosure may lead people to rethink their attitudes toward transgender people.”

Members of Egypt's transgender community celebrated Selim's announcement as a step toward reversing the widespread antipathy toward transgender people.

“This is a remarkable step forward and a marked change signaling greater social acceptance and a more supportive environment for transgender people,” Malak el-Kashif, an outspoken transgender woman and rights activist, wrote on her Facebook page May 3.

Like many fellow members of Egypt's LGBTQ community, Kashif has suffered discrimination, abuse and even persecution. The 20-year-old, who was registered as a boy at birth, got approval from the Egyptian Medical Syndicate to change her gender three years ago and has since performed several gender reassignment surgeries.

Kashif has gained a massive following chronicling her transition on social media and also advocates for transgenders' rights in her articles published on the Transatsite, an Arabic-language portal dedicated to gender identity issues.

But Kashif has paid a price for her visibility, as she has been arrested three times in what she told Al-Monitor were “attempts by the authorities to silence me.” She recalled, “On one occasion in 2018, I was arrested at a checkpoint on my way to [the town of] Dahab, after the officer who searched my bag found my medical records and some dresses. I was taken into custody on the accusation of traveling with the intent of engaging in illicit sexual conduct.”

In March 2019, Kashif was arrested again — this time over a Facebook post calling for demonstrations to protest a deadly Cairo train crash that had taken place some days earlier.

Such examinations have been denounced by the Egyptian Commission for Rights and Freedoms as “a flagrant violation of privacy and human dignity” and tantamount to "torture." Kashif, who has yet to change her gender designation on her ID card, was held for four months in solitary confinement in an all-male prison on charges including “aiding a terrorist organization” and “misusing social media by spreading false news on Facebook.”

After her release in July 2019 pending further investigations, she filed a legal complaint demanding separate cells for transgender inmates in police stations and prisons.

“Those who have not completed their transition should be separated from other prisoners to avert the risk of sexual assault at the hands of other inmates,” she said.

There has been no verdict in the case so far as the court proceedings have been postponed several times. Kashif expects yet another postponement on May 30, the scheduled date for the next court session.

Gender reassignment surgeries are legal in Egypt. In 2013, the Medical Syndicate issued a Code of Ethics recognizing gender identity disorder (GID) as a medical condition, thus paving the way for transgender patients who have GID to undergo sex change surgeries. But these surgeries were being performed in Egypt long before then. In January 1988, in a much publicized case, Sayyid Abdallah, a then-19 year-old medical student at Al-Azhar University, underwent gender reassignment surgery, transitioning to Sally. The case stirred a great deal of controversy and Sally was reportedly punished by the then-dean of the Medical Faculty who refused to admit her for the final exam or have her transferred to the Medical Faculty for girls. The Medical Syndicate accused the surgeon who performed the operation of committing “a grave error.”

Today — more than three decades later — perceptions of gender transition have not changed much — the procedure is still largely frowned upon as “sinful” and “tampering with God's creation.” That perception may have been shaped by the Islamic hadith citing that “God has cursed effeminate men who imitate women.” Former Grand Mufti Ali Gomaa, however, affirmed in a 2014 TV interview broadcast on the Egyptian CBC channel that “it is a duty for transgender persons — and their families — to correct their gender to end their state of confusion."

The surgery is only permissible for hermaphrodites (those with male and female reproductive organs), Gomaa said, adding that it is forbidden in cases of a person choosing to behave or look like the opposite sex but only has the traits of his or her birth gender.

Gomaa's view was reiterated by Dar al-Iftaa, the authority that issues religious edicts, in response to a question by Al-Monitor (via its hotline) on whether such surgeries are halal (permissible). “If a medical specialist decides that the surgery is in the patient’s interest and is necessary to protect him or her from harm, then it is permissible. But it is forbidden in cases where there are no medical grounds and a man simply desires to become a woman or vice versa,” an Iftaa cleric said.

Up until 2016, transgender people were able to undergo gender reassignment surgeries at public hospitals without charge. This is no longer the case and “permits for such surgeries are now harder to obtain,” Hashem Bahary, a professor of psychiatry at Al-Azhar University, told Al-Monitor in a telephone interview.

A sex correction committee — made up of a psychiatrist, a medical expert from the Medical Syndicate and a cleric from the Ministry of Endowments — had met periodically to review requests for gender transitions and approve or reject them on a case-by-case basis. But the committee has not convened since early 2016, leaving those wishing to change their gender with no option but to turn to private hospitals and clinics.

A gender reassignment surgery costs in the range of 25,000 Egyptian pounds (around $1,600), according to Bahary, who said that the surgeries are beyond the means of the average Egyptian. Al-Azhar’s Psychiatric Center, which had offered transgender patients psychological support for nearly two decades, was shut down in 2017 at the behest of Al-Azhar Grand Imam Sheikh Ahmed el-Tayeb, according to Bahary, who said he continues to offer his LGBTQ patients free mental health services at his private clinic.

Transition is a complex and tedious process in Egypt, often taking several years to complete. It involves two years of psychological treatment, medical tests and approvals by religious authorities and medical specialists.

“After completion of the transition, a report is submitted by forensic experts to the Interior Ministry requesting permission for the change in gender designation on ID cards,” Bahary said.

Waad Mohamed Ahmed (nicknamed Cinderella ), a 28-year-old Alexandria-based lawyer, has been more fortunate than most. Identified as a boy at birth, she performed her first gender reassignment surgery five years ago at a private hospital at her own expense. She then underwent a second surgery at Kasr el-Eini public hospital in Cairo. It took several months to change her gender status on her ID card after approval from forensic experts. “The worst time for me was before the transition. I was ostracized by my family and was persistently sexually harassed on the street,” she told Al-Monitor.

Her biggest concern today is finding a suitable marriage partner. “When men who are attracted to me learn about my past, they shy away,” she said.

In a society with little tolerance for gender variance, the biggest challenge for transgender Egyptians is gaining societal acceptance.

“Selim's disclosure about his son's transition is a milestone in transgender Egyptians' fight for recognition and respect,” Hassan said. “Not only has he broken a longstanding taboo, but he has also brought to public attention the dire need to integrate this marginalized minority group into the mainstream.”