Is Lebanon on the path to decriminalizing homosexuality?

Education and awareness seem to be the solutions to creating a society and legal system that are more tolerant toward the LGBT community in Lebanon. 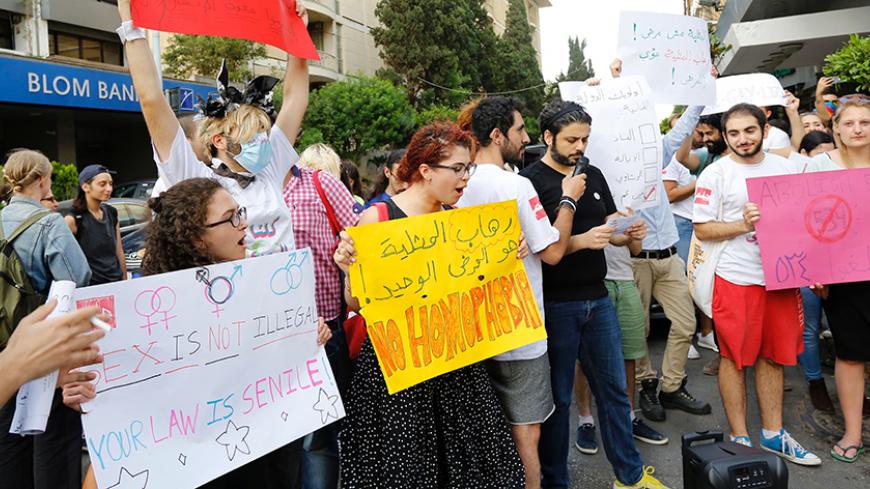 Activists from the Lebanese LGBT community take part in a protest calling for the abolishment of Article 534 of the Lebanese penal code, outside the Hbeish police station in Beirut, Lebanon, May 15, 2016. - ANWAR AMRO/AFP/Getty Images

On Jan. 26, Lebanese judge Rabih Maalouf issued a court order stating that “homosexuality is a personal choice, and not a punishable offense.” Maalouf is the fourth judge since 2009 to go against Article 534 of the Lebanese penal code, which states sexual acts that “contradict the laws of nature” are punishable by up to a year in prison.

In 2013, the Lebanese Psychiatric Society stated that homosexuality is not a mental disorder and does not need to be treated. In 2015, the society updated the statement, calling for the abolition of Article 534.

“These are all small steps aiming to decriminalize homosexuality. This is not a victory,” Bertho Makso, a Lebanese activist from the nongovernmental organization Proud Lebanon, told Al-Monitor. “The real victory will be when Article 534 is changed or abolished. But now the priority is to educate people to avoid homosexuals' persecution and make change happen.”

Makso said, “This ruling is very important because the judge used a different law about personal freedom not affecting society, adding that the duty of the court is to protect human rights and people's dignity.” Maalouf referred to Article 183 of the penal code — which states, “An act undertaken in exercise of a right without abuse shall not be regarded as an offense” — and to the International Convention of Human Rights that Lebanon signed in 2006.

According to a source close to the Ministry of Justice, who spoke to Al-Monitor on condition of anonymity, “This ruling adopts a different position than the three previous rulings, whose judges had argued over the impossibility to define 'nature' to rule out criminalization by Article 534.”

She added, “I am convinced of this last approach because it brings same-sex conduct out of this text by using logic. Plus, the Lebanese law cannot be opposed to international conventions, having more power than the penal code.”

But she is not optimistic in regard to the amendment or abolition of Article 534. “I really doubt this law can be abolished because of the composition of the Lebanese parliament," she said. "They are very inspired by religious texts and the Quran says, for example, that homosexuality is a sin and it shouldn't be talked about publicly. It is a real barrier for LGBT [lesbian, gay, bisexual and transgender] freedom. The only good thing is that most judges — even conservative ones — no longer use jail time as a punishment for homosexuality. Usually it is a fine they have to pay when they are released. The judicial trend in Lebanon is not to be too harsh, but the problem is in the detention part, where LGBT people are often subjected to humiliation and sometimes even torture by the Internal Security Forces [ISF].”

The same year, the Lebanese Order of Physicians banned doctors from carrying out the “egg tests” — whereby a metal egg-shaped object is inserted into the rectum — on suspected homosexuals as it is related to torture, according to the physicians’ order. Subsequently, a statement by the Ministry of Justice urged the country’s public prosecutor to ban the tests.

“The police have threatened people with this test since 2013, but they are no longer subjecting people to it,” Makso said. “Now they use other techniques available to prove that someone is homosexual — by checking his cellphone's applications, contacts and pictures on social media. Still, members of the LGBT community are proved to be arbitrarily detained and tortured, even psychologically.”

Nasser, whose name has been changed at his request, told Al-Monitor, “As a gay man in Lebanon, I have absolutely no complaints. I get a free pass, like most other gay men before me.”

He said, “The dividing lines are 'women versus men,' 'cis versus trans’ and ‘rich versus poor’ — not urban and rural. Gay and trans women and men have it harder than cis gay men. Gay men can take a seat and stop playing victims.” For Nasser, the best way to change the situation for good is “more rights over one's own body and personal rights' awareness being discussed in schools in order to make a real political and attitude change in the long term.”

In regard to educating the public on the issue, Makso said, “We will continue leading small fights, but again we have to work on society — maybe with the public support of famous figures and in collaboration with the media."

Education and awareness seem to be the only solutions to create a more tolerant society and legal system toward LGBT people in Lebanon, with small victories like the Jan. 26 court order.