In the run-up to the anniversary of the January 25 revolution that led to the ouster of President Hosni Mubarak, Egyptian President Abdel Fattah al-Sisi's comments on human rights at a youth forum in Sharm El Sheikh are met with a backlash from activists on social media. 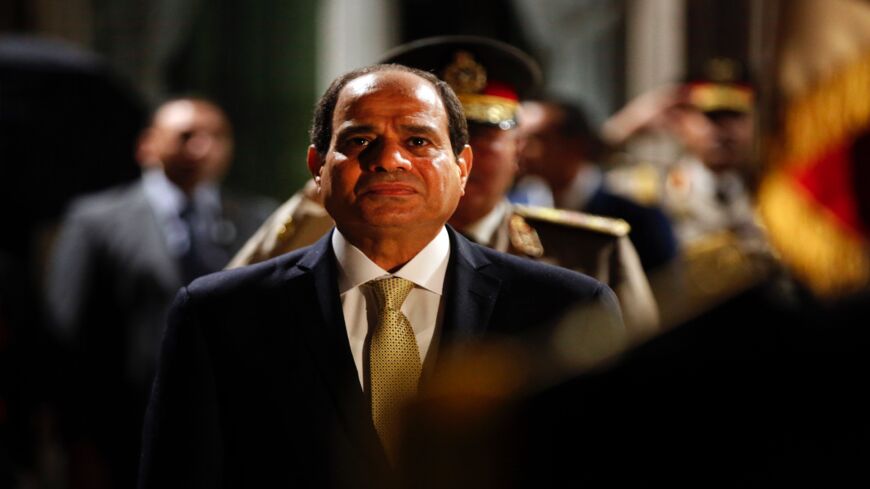 Egyptian President Abdel-Fattah al-Sisi reviews an honor guard prior at The Defense Ministry in Paris on Oct. 23, 2017. Sisi is starting a three-day visit to France during which human rights along with economic and military cooperation are expected to be discussed. - THIBAULT CAMUS/POOL/AFP via Getty Images

Jan. 25 marks 11 years to the day when thousands of Egyptians marched to Cairo's iconic Tahrir Square to demand "Bread, Freedom and Social Justice!" Little did the anti-government protesters know then that it was to be the start of a mass uprising that 18 days later would lead to the overthrow of longtime President Hosni Mubarak.

Eleven years on, Egyptians find their country still in the tight grip of the military. Many complain that the revolutionary goals of "bread, freedom and social justice" are today even further from reach than they were on that fateful day more than a decade ago. For the Tahrir activists, the anniversary of the Jan. 25, 2011, revolution is a day to reminisce about the tumultuous events that have taken place in their country since and to look ahead to what many of them say is "an uncertain future."

Just a week before the 11th anniversary of the Jan. 25 uprising, the Arabic hashtag #Erhal_ya Sisi (#Leave_Sisi) was trending on Egyptian social media. The hashtag was created in response to President Abdel Fattah al-Sisi's pledges to step down immediately if Egyptians asked him to do so.

Sisi made the vow after being challenged by foreign journalists on Egypt's human rights situation at a UN Human Rights Council simulation session held on the sidelines of the World Youth Forum (WYF). The forum, which takes place annually in the Red Sea resort of Sharm El Sheikh, is "a platform giving youth a chance to engage with policymakers," according to the WYF's official Facebook page.

Responding to a journalist's question on criticism from rights groups directed at the Sisi government over the thousands of political detainees, forced disappearances, as well as the diminishing space for freedom of expression and freedom of speech, including the blocking of hundreds of news sites in Egypt, Sisi said he was willing to have an independent committee of youth (from the forum) look into such allegations and publicly report its findings.

"If there are excesses or violations, I would be willing to correct them," he promised. Sisi insisted that "often the figures concerning those detained or forcibly disappeared (reported by rights groups and the international media) are inaccurate or inflated. "Either that or they fail to see the full picture."

"Do you love our people more than we do? Do you care more about our country than we do?" he asked, apparently addressing international rights groups critical of his policies. "Our people want to live and want their country to grow and develop like other (advanced) countries without obstacles or impediments."

Sisi added that he was willing to hold elections on a yearly basis with international observers attending "on condition that you finance the cost of organizing those elections." Although it was again unclear who Sisi was addressing, he likely meant donor states and international partners.

The Egyptian president suggested that the country needs between $20 billion and $30 billion annually to remain afloat and that the authorities would fail to fulfill citizens' needs if protests were to break out.

"After the instability and turmoil (witnessed) in some of the neighboring countries, how can there still be talk of (allowing) protests as a means of freedom of expression; give me $50 billion annually, and I will allow Egyptians to protest," he said.

An anti-protest law was decreed by former President Adly Mansour in 2013, giving the Interior Ministry the right to call off or postpone any protest if the ministry determined that the protesters would breach the law. The law also requires special permits from the authorities for any protest involving more than 10 people.

Sisi's remarks were met with fierce backlash from opposition activists on social media. Using the hashtag #Leave_Sisi, the activists called Sisi "a liar." Some counterargued that 60,000 political prisoners are being held in Egyptian jails while others tweeted that Egypt "is considered the world's third-worst jailer of journalists after Turkey and China."

The country's poor ranking is from a 2017 report published by the New York-based Committee for the Protection of Journalists (CPJ), which put the number of jailed journalists at 20. There has been little change since: Egypt again ranked third as worst jailer in CPJ's 2021 report, this time with even more journalists — 25 — behind bars for doing their work.

In September, in what seems to be an attempt by the government to improve the country's human rights image, Egypt launched a National Human Rights Strategy, outlining a list of objectives to be met over the next five years. Hailed as a "milestone" by Sisi, the document has been dismissed by  Egyptian rights advocates as a means to "deflect international criticism."

In recent weeks, however, a handful of political prisoners have been released in what some see as a hopeful sign that the authorities may be easing their harsh crackdown on dissent. Patrick Zaki, a prominent Coptic rights activist and graduate student at Bologna University with dual Egyptian/Italian citizenship, was among those released. He had spent nearly two years in pre-trial detention on the charge of "spreading false information" in relation to an article he wrote on the plight of Egypt's Christians. An Egyptian Court in Mansoura, north of Cairo, ordered his release Dec. 7 while adjourning the trial to Feb. 1.

Ramy Shaath, co-founder of Egypt's pro-Palestinian Boycott, Divestment and Sanctions movement, was also released earlier this month after spending "over 900 days in arbitrary detention," according to a tweet published by his wife, Celine Lebrun Shaath. His release came with strings attached: Shaath was forced to renounce his Egyptian nationality before he could walk free. Zaree downplayed the recent releases as "too little, too late" and insists they do not signal an opening up on restrictions on freedom of expression.

"While I'm always happy to hear about the release of those unjustly detained, the number of those who have been released is a mere drop in the ocean compared to those languishing behind bars," he lamented.

Zaree argued that the authorities are using political detainees and prisoners of conscience as "bargaining chips for political and economic gains."

"They continue their rights abuses even as they engage in talks behind closed doors with international partners, using detainees as bargaining chips for political and/or economic gains," he told Al-Monitor.

Zaree noted that the launch of the human rights strategy last September came as the United States was reviewing its aid policy on Egypt. The move nevertheless failed to deter the Biden administration from withholding some of the $300 million conditioned military aid to Egypt.

On Sept. 13 — two days after Egypt kicked off its human rights strategy — the US administration announced its decision to hold back some $130 million (nearly half of the conditioned aid) over "human rights concerns."

Zaree has been banned from travel and has had his assets frozen due to his involvement in Case 173 of 2011 — a long-running case referred to by the Egyptian media as "the foreign funding case" under which dozens of nongovernmental organizations (NGO), including the Cairo Institute for Human Rights Studies, have been charged with receiving illicit foreign funding to sow chaos in the country. Despite the charges against the NGOs being dropped in April on grounds of "insufficient evidence," the travel ban against Zaree and most of the other defendants has not been lifted.

Sisi's comments on human rights came just days after the Arab Network for Human Rights Information (ANHRI) — a leading rights group devoted to promoting freedom of expression across the Middle East and North Africa — announced the halt of its operations, citing "absence of the bare minimum of the rule of law and respect for human rights" as the reason for its closure.

ANHRI founder Gamal Eid said that the decision to suspend the rights group's activities came after "the persecution and targeting of the group's members (by security agencies)."

"Not only have some of our team members been arrested and others harassed, but the ANHRI offices, too, were ransacked and all our documents and furniture seized," he told Al-Monitor.

Eid too has been banned from travel and has had his assets frozen in connection with the notorious NGO foreign funding case. The announcement of plans to suspend the activities of the ANHRI coincided with a Jan. 11 deadline set by the government for civil society organizations to register or face closure.

Egypt's 2019 NGO law, described as "repressive" by rights watchdog Amnesty International, strips civil society organizations of their independence while empowering the authorities to interfere in all CSO activities and, according to a Jan. 10 report published by EuroMed Rights.

Ironically, despite the widespread crackdown on civil society, Sisi has declared 2022 as "the Year of Civil Society."

"A good start would be to repeal the draconian NGO law," said Zaree. "Only then can the government's promises to carry out the needed political reforms be taken seriously."