The executive director of the Arabic Network for Human Rights Information tells Al-Monitor that the government wants to “turn civil society into a government division.” 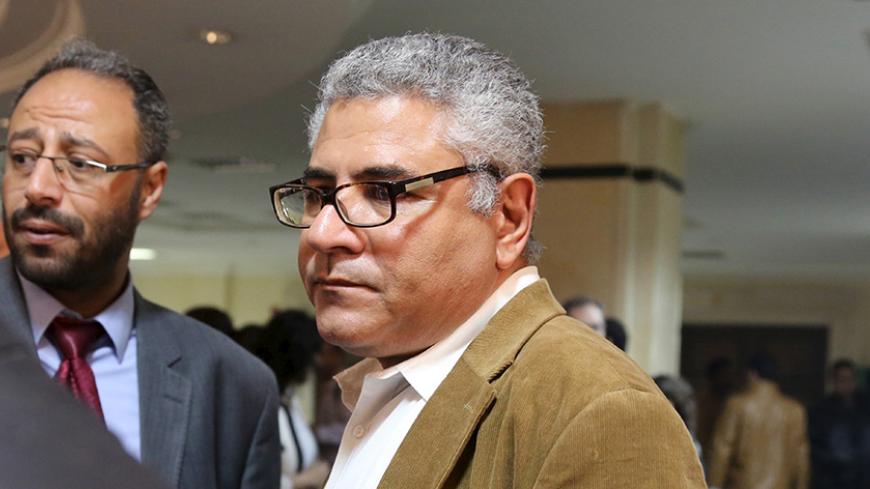 CAIRO — Egyptian human rights organizations are facing a major crisis that threatens their very existence. A number of those affiliated with these organizations are being prosecuted for their criticism of the current regime’s policies, and the government is using various measures to limit their work. Chief among these is reopening probes into accusations that nongovernmental organizations received foreign funding to destabilize the country — knowing that such charges can incur penalties up to life imprisonment — and bringing legal proceedings, including ones that can impose travel bans and asset freezes, against prominent human rights activists.

Gamal Eid, a prominent rights activist and executive director of the Arabic Network for Human Rights Information (ANHRI), has been banned from traveling and his assets were frozen, along with the assets of his wife and his minor daughter. Eid spoke to Al-Monitor about his concerns over the escalating campaign led by the state against civil society organizations, and expressed his apprehension regarding the unknown future that awaits them in Egypt.

Al-Monitor:  Do you expect the Egyptian regime will continue with its campaign targeting civil society organizations for the foreseeable future, or are they just the authorities’ "target du jour"?

Eid:  I wish I knew the answer. I wish there was some sign from the regime that would let us predict what will happen next. We unfortunately do not know who exactly is attacking us or managing this sharp attack against us.

Al-Monitor:  Some believe that reopening the issue of foreign funding — i.e., clamping down on NGOs that receive such funding — is being used by Cairo as a way to pressure the West in negotiations. What is your take on this?

Eid:  Several reasons have led the regime to reopen the issue. It could be either because the regime wants to use the case as a bargaining chip or because it wants to get rid of criticism targeting it. It could also be a campaign of pressure from remnants of the Mubarak regime to take revenge on those who participated in the overthrow of former President Hosni Mubarak. Also, some believe that the regime is heeding Saudi Arabia’s advice, knowing that Riyadh antagonizes human rights organizations. Others believe that civil society is a card in the conflict between the different apparatuses. In other words, there are several possible reasons.

Al-Monitor:  Have you been questioned by the body investigating these cases?

Eid:  I have neither been summoned nor questioned since 2011. I was not even informed of being accused. The things I know concerning my case are things I learned from the media. I believe that the present case is a punitive action taken as a result of my recent political and human rights positions.

Al-Monitor:  Are you being investigated only as a result of accusations related to receiving foreign funding, or did they question the overall legality of the NGO you head, ANHRI?

Eid:  The information I have about this case is from the media. During the preliminary hearing, the judge asked us about the relationship between the money freeze and the travel ban on the one hand and what is stated in the case on the other. My answer was that I was not accused to begin with and that I was not questioned regarding any issue.

Unfortunately, the investigating judge relied on a statement sent by a national security officer, and when they went to the bank to ask about whether I was getting personal funding, the bank assured them that I was not. This confirms that their accusations are not based on legal grounds and that they are only seeking to harm human rights defenders.

Al-Monitor:  Why are many Egyptian civil society organizations — ANHRI included — registered as limited liability companies instead of as human rights organizations in accordance with Egyptian law?

Eid:  Many of us tried to register as associations, but the state security apparatus’ control during the rule of the dictator Mubarak to date meant [our requests] were denied. Therefore, we registered under other legal forms. Today, Law 84 of 2002 has become unconstitutional.

Al-Monitor:  Does being registered under the Law on Association protect these organizations from being pursued by the authorities?

Eid:  The political case currently in question has nothing to do with the nature or form of any human rights organization’s registration. It is rather related to the nature of their work and credibility. Many organizations conspiring [with the regime] were registered as companies but not mentioned, while others were registered in compliance with Law No. 84 and prosecuted. The bottom line is: Are the organizations colluding with [the regime] or not?

Al-Monitor:  Former Justice Minister Ahmed al-Zend said in a televised interview Jan. 28 that prosecution in cases of those accused of receiving foreign funding would start moving forward soon. … Do you think he’s one of the ones involved in stirring this issue?

Eid:  Yes, but he does not stand alone in this. As I said, many remnants of Mubarak’s regime are enemies of independent human rights’ associations.

Al-Monitor:  To what extent can civil society NGOs rely on local funding alone, given that the state is demonizing foreign funding and could potentially ban it in the near future?

Eid:  In 2011, we submitted a draft law on organizations to the military council, back when we thought that the council was protecting the revolution. The draft’s aim was to primarily rely on local funding and businessmen’s support and to secondly rely on international NGOs, provided each organization announces the source and size of the funding it receives and the way it spends the money. However, the military council, in cooperation with Faiza Abou el-Naga, the former minister of planning and international cooperation and current presidential adviser on national security, expressed its strong opposition to civil society. With all due respect, we cannot forget the [US] military aircraft that transported those accused in the fabricated case out of Egypt [in 2012], knowing that there were verdicts issued against them. In brief, the issue is not about the funding, but about the confiscation of public space. It is about asking civil society to embellish the image of the regime, which is something we totally refuse.

Eid:  President Sisi’s regime is a mixture of the Mubarak regime and the military, both of whom are hostile to human rights and the rule of law, which is what makes the work of human rights organizations very difficult.

Al-Monitor:  What are the drawbacks to the new draft law on NGOs, which the government is planning to submit to the parliament in the coming period?

Eid:  Unfortunately, we learned that there are three draft laws that have been submitted by the Ministry of Solidarity, the state security apparatus and the national security apparatus. These three draft laws are competing over the control and domination of civil society. They want to turn civil society into a government division rather than for it to be an independent party cooperating with the state for the benefit of citizens.

Al-Monitor:  How is the relationship between the ruling political regime and human rights organizations different from what it was during the period of former President Hosni Mubarak?

Eid:  Unfortunately, and despite my strong opposition to the Mubarak regime, there used to be some space for service provision, and there were even areas, albeit marginal, where civil society was allowed to work. Faiza Abou al-Naga was not in control back then, whereas she has the upper hand now. They have the power, but right is on our side.