The Egyptian government is being condemned for its new, and renewed, human rights abuses. 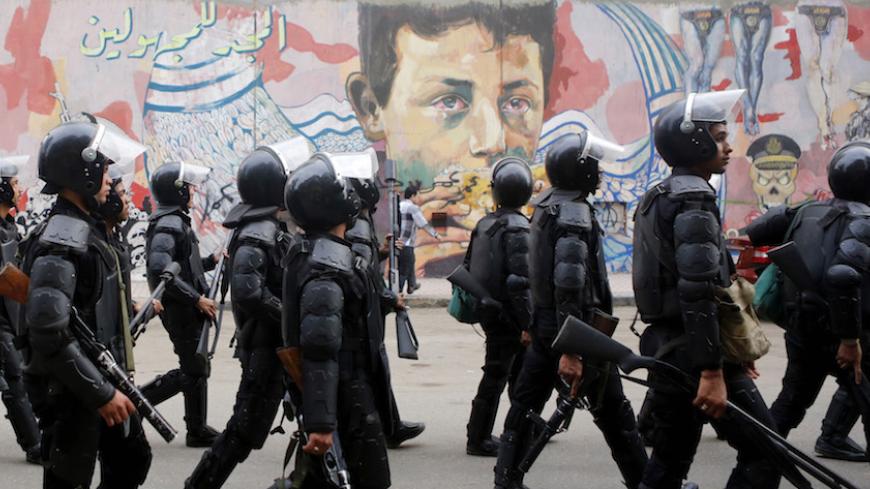 Riot police walk in front of graffiti representing anti-military power and Egypt's unrest, which reads "Glory to the unknown," along Mohamed Mahmoud Street during the third anniversary of violent and deadly clashes near Tahrir Square in Cairo, Nov. 19, 2014. - REUTERS/Amr Abdallah Dalsh

An Egyptian court will resume its deliberations May 23 in a long-running, on again, off again human rights case that has placed the country at the center of an international controversy — again.

The controversy revolves around a case that began in 2011 and supposedly ended in 2013, but that Egypt recently resurrected, apparently in response to being roundly criticized by world leaders for new, high-profile human rights violations.

In 2011, the government raided 17 foreign and Egyptian nongovernmental organizations (NGOs) in Cairo, confiscating their funds, documents and equipment and detaining numerous workers, challenging the NGOs’ right to receive foreign funding.

In 2013, Egypt sentenced 43 people in that case, including 19 Americans, to one to five years in prison.

Jump to March 10, when the European Parliament issued a resolution condemning the human rights situation in Egypt after the killing of Giulio Regeni, a young Italian doctoral student. Six days after the resolution was announced, the Egyptian government decided to renew its investigation into NGO funding and reopened the 2011 investigation, again freezing assets and detaining staff, and issuing a gag order on the media.

The targets of the new investigation include rights activists Gamal Eid, a lawyer, and Hossam Bahgat, a journalist. Both men are NGO founders, and both have had their assets frozen and are not allowed to travel. Human rights observers considered the occurrence a setback and feared a quick escalation in rights violations.

That prompted the European Parliament to issue another, harsher statement March 24 saying, “We are witnessing a mounting pressure on independent Egyptian civil society organisations, in particular human rights organisations and defenders. The recent imposition of travel bans, asset freezes and the summoning of human rights defenders are not in line with Egypt's commitments to promote and respect human rights and fundamental freedoms as guaranteed by its Constitution and enshrined in the EU-Egypt Association Agreement, which is the basis for our partnership.”

The statement added, “The decision to revive the so-called ‘2011 foreign funding case,’ targeting EU partners who are crucial in the democratic development of Egypt, is of serious concern.” The EU also asked Egypt to “allow the independent functioning of civil society organisations and human rights defenders, free of fear of intimidation.”

That wasn’t the end of the international consternation. On April 20, as the Cairo Criminal Court prepared to address aspects of the cases of Eid and Bahgat, among others, a UN spokesman said UN Secretary-General Ban Ki-moon would follow closely the legal proceedings in Egypt against the NGOs and “human rights defenders.” The statement underlined a defendant’s right to a fair trial and convenient legal proceedings.

The Egyptian government immediately rejected the UN statement. The Foreign Ministry objected to any intervention in the Egyptian judiciary’s work, especially a few hours before the session was to begin.

Judge Ahmed Abu Zeid, spokesman for the Egyptian Foreign Ministry, said, “The statement is an attempt to target and terrorize the independent Egyptian judiciary, although such words are not in line with the UN’s powers and responsibilities and its constant claim to respect the state of law and the independence of the judiciary.”

Also on April 20, in a potential blow to the criminal court’s proceedings, an administrative court ruled that NGOs do have the right to receive foreign funding.

The Cairo Criminal Court decided to adjourn the April 20 session until May 23.

Eid, who is also head of the Arabic Network for Human Rights Information, told Al-Monitor, “This case is political and fabricated. The aim is to silence independent NGOs that enjoy credibility and independence.”

He said, “Civil society organizations are the last standing parties to criticize the government’s policies in political, economic, developmental and rights issues and to document rights violations committed by the state. Consequently, the government’s main aim is to eliminate these organizations, terrorize their members and mobilize Egyptian public opinion against them.”

Eid compared President Abdel Fattah al-Sisi’s rule to previous Egyptian regimes such as that of former Presidents Hosni Mubarak and Mohammed Morsi. He said, “Unfortunately, Sisi’s regime is the worst ever in Egypt’s history. Under previous regimes, nobody dared freeze money, forbid activists from traveling or threaten civil society members with imprisonment, as is currently the case.”

At the time, the government accused the groups of receiving foreign funding worth $60 million between March and December 2011 without notifying Egyptian officials. The organizations were also accused of using the money to serve foreign purposes, including political training, supporting the campaigns of representatives of political parties, mobilizing voters and preparing reports sent to the United States. The government said this shook Egyptian sovereignty and threatened security and stability in the country.