A widening security crackdown on civil society organizations and activists has left many in Egypt pessimistic about the future. 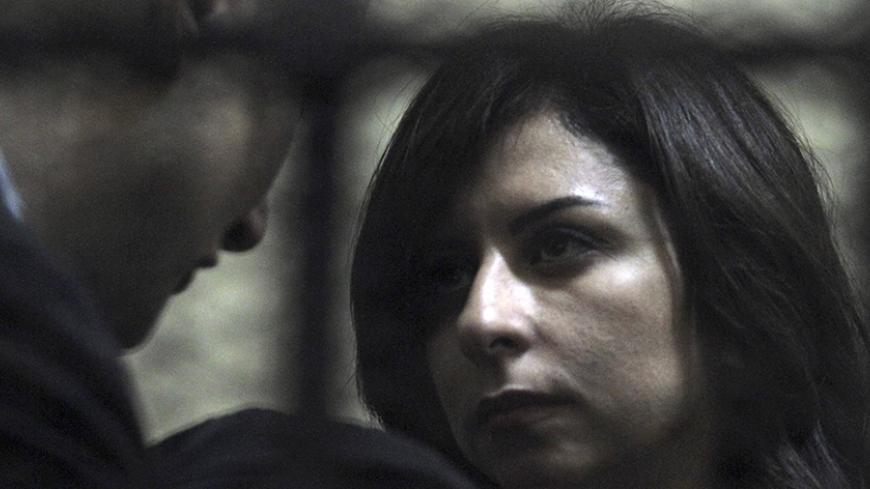 One of 14 Egyptian activists accused of working for unlicensed NGOs and receiving illegal foreign funds speaks with American Robert Becker (L) of the National Democratic Institute during a trial in Cairo, March 8, 2012. - REUTERS/Mohamed Abd El Ghany

Seventeen Egyptian rights organizations have released a joint statement condemning what they described as “an orchestrated, escalating assault on Egyptian civil society” organizations in recent weeks.

The statement, published on the official website of the Cairo Institute for Human Rights Studies on March 21, added that recent measures adopted by the authorities against a number of rights organizations — including travel bans, summons for questioning and the freezing of assets of two prominent rights defenders — were an attempt “to entirely eliminate rights organizations” and use the judiciary as a political tool to silence dissidents.

Indeed, independent civil society organizations are the latest target of a widening security crackdown on dissent that has seen thousands of opposition members, secular activists, journalists and intellectuals imprisoned since the military takeover of the country in July 2013.

The imposition of travel bans on rights activists Hossam Bahgat and Gamal Eid and the freezing of their assets (along with the assets of Eid’s family members) on charges they received a total of $1.5 million in “illegal funds from foreign entities” has raised fears among rights groups of increased repression and a diminishing space for freedom of association in Egypt.

Bahgat, the founding chairman of the Egyptian Initiative for Personal Rights and a journalist working for the independent news portal Mada Masr, was prevented by authorities from traveling to Jordan on Feb. 23 to participate in a UN conference on justice in the Arab world. Four months earlier, he had been summoned for investigation by the military prosecutor in relation to an article he had written about a split in military ranks. He was detained for two days in November 2015 on charges of “publishing false news that harms national security and disseminating information that disturbs public peace.” His impromptu release a couple of days after his arrest was clearly the result of international pressure piled on the authorities following a wave of outrage over his detention and calls for protests in Cairo, London and other cities to demand his release. While Bahgat was able to walk free, he was not sure if the charges against him had been dropped or if he would face trial at a later date.

Eid, another prominent human rights activist and lawyer and founder-chairperson of the Arabic Network for Human Rights Information, was banned from traveling to Athens on Feb. 3. He was turned back by airport officials who told him that his name was on a travel ban list following a judicial order.

A Cairo court has postponed to March 24 a session to rule on last week’s judicial order freezing the assets of the two activists after the defendants failed to show up in court. Their defense lawyers said their clients had not been officially notified of the case.

The measures against Eid and Bahgat are part of a wider security onslaught against civil society organizations working to promote democracy and human rights. In recent weeks, the authorities have reopened investigations into the so-called foreign funding case, dating back to 2011. The targeted organizations include Eid’s Arab Network for Human Rights Information and Bahgat’s Egyptian Initiative for Personal Rights, Nazra for Feminist Studies, the Cairo Institute for Human Rights Studies and other nongovernmental organizations (NGOs).

The notorious case (No. 173 of 2011) has been reopened “to silence critics and crush the last vestiges of free expression in the country,” Eid told Al Monitor.

In 2011, five foreign NGOs were accused of operating and receiving foreign funding without a license — 43 of the NGOs’ staffers (17 of whom were US citizens) faced charges of “conducting research, political training and workshops without licenses” and "illegally receiving foreign funding." The defendants were handed down jail sentences ranging between one and five years, many of them in absentia. The court also ordered the closure of the international NGOs and the confiscation of their funds. Meanwhile, Egyptian civil society organizations accused in the same case were allowed to continue to operate.

In September 2014, President Abdel Fattah al-Sisi amended Article 78 of the Penal Code, adding the provision that “receiving foreign funding for the purpose of harming national security” is punishable by life imprisonment. The decision to reopen investigations of the Egyptian NGOs comes after the 17 aforementioned rights organizations sent a letter to the UN High Commissioner for Human Rights decrying the deteriorating human rights situation. They cited extrajudicial killings, forced disappearances, police brutality and torture among a host of rights violations practiced in the country.

In their letter, the rights groups mentioned this week’s investigation of three female staff members of Nazra for Feminist Studies (an NGO working to promote the causes of women) on charges of “receiving illegal foreign funding.” Mozn Hassan, the chairperson of Nazra, described their interrogation by prosecutors as “an attempt to intimidate us and restrict our activities.” She said she believed her organization was specifically targeted because of "Nazra’s perception of feminism as a movement that requires political and legal reforms.”

The letter also mentioned visits by government officers to several civil society organizations as part of the ongoing criminal investigation into their funding.

Meanwhile, El Nadeem Center for Rehabilitation of Victims of Violence — a prominent institution providing medical services and counseling to victims of police torture — was shut down in late February after it had received an administrative closure order claiming it had violated the terms of its license. The order did not disclose details about the nature of the violations. Furthermore, Negad El Borai, a human rights lawyer who heads the legal unit at United Group for Law, was interrogated March 3 for three hours before an investigative judge on charges of “receiving foreign funding, managing an illegal organization and spreading false news.” El Borai, a columnist for the independent Al Shorouk newspaper, is a staunch advocate for freedom of expression, assembly and association. Rights advocates believe that his work in helping draft a law to combat torture in Egypt’s prisons is the real reason for his persecution.

The investigative judge in the foreign funding case has described the measures against the rights organizations as “precautionary.” Officials have meanwhile rejected any criticism of the rights abuses that rights groups say "have reached unprecedented levels in the country’s modern history." In response to a recent scathing resolution by the EU Parliament that called for the suspension of military aid to Egypt because of the continued rights violations, the Foreign Ministry released a statement lamenting that the EU resolution was based on undocumented media reports.

The repeated denials of rights abuses and continued repression signal more harassment of rights defenders and greater restrictions on freedom of association in the country in the weeks and months to come.

“The reopening of investigations of NGOs in the foreign funding case, the freezing of our assets and the travel bans are meant as a clear message to rights groups: Be silent or meet a similar fate. That’s because the voices of these rights groups are the loudest in calling for democracy and in fighting repression,” Eid said. He reminded the government, however, that restrictions on freedom of expression and association can produce neither stability nor security.

With the trial to decide on the freezing of Eid's and Bahgat’s assets adjourned, neither Eid nor the other rights defenders are betting on a positive outcome — nor do they expect an easing of the clampdown on rights organizations anytime soon.