Hossam Bahgat avoided jail time but was ordered to pay a fine for "insulting" the country's National Election Authority. 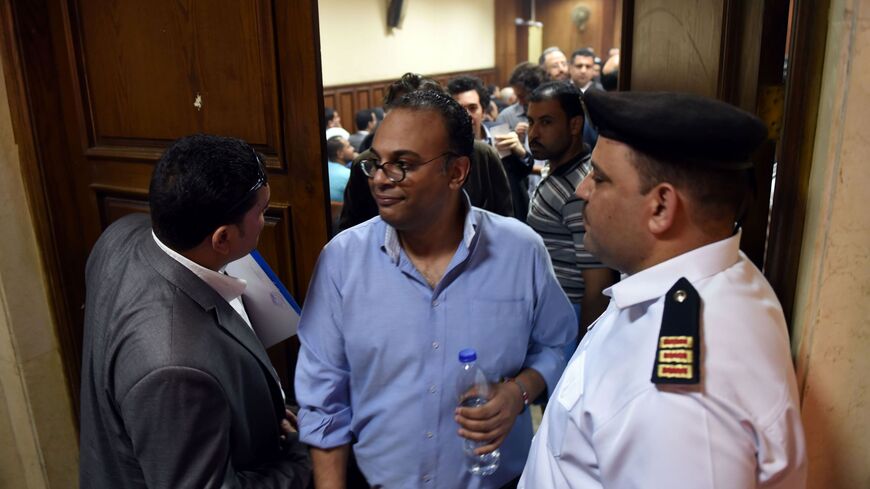 Human rights activist Hossam Bahgat (center) leaves the courtroom in Cairo as an Egyptian court examines a request to issue a travel ban and freeze his assets on Apr. 20, 2016. - MOHAMED EL-SHAHED/AFP via Getty Images

The Biden administration has voiced concern over Egypt’s conviction of a leading activist whose case human rights groups say is emblematic of the Egyptian government's campaign to silence dissent.

Hossam Bahgat, a lawyer who is the founder and executive director of the Cairo-based Egyptian Initiative for Personal Rights (EIPR), was found guilty on Monday of insulting the country’s election authorities. A misdemeanor court fined him 10,000 Egyptian pounds (about $640) but imposed no jail time, according to his organization.

Bahgat had been charged with insulting a state institution, spreading false news with malicious intent and using social media to commit crimes. The charges were linked to a December 2020 tweet, in which he alleged corruption occurred during the country’s parliamentary elections.

“We are concerned by reports that prominent human rights defender and journalist Hossam Bahgat was convicted and fined for peacefully exercising his right to freedom of expression,” a State Department spokesperson told Al-Monitor.

The verdict on Monday is far from the end of Bahgat’s legal woes. He and EIPR remain under investigation as part of Case 173, a long-running case that accuses civil society and human rights groups of illegally receiving foreign funding. In 2016, a Cairo court imposed a travel ban on Bahgat and froze his assets.

Last week, a group of 46 rights organizations, including Human Rights Watch and Amnesty International, called on Egypt to halt its “harassment and persecution” of Bahgat, describing his charges as designed to “punish him solely for exercising his right to freedom of expression and his human rights activism.”

Under President Abdel Fattah al-Sisi’s watch, security forces have jailed tens of thousands of perceived government critics. In November 2020, Egypt arrested three EIPR members on terrorism and false news charges, in apparent retaliation for the group’s meeting with European diplomats in Cairo. They were released the next month following international condemnation, including from US Secretary of State Antony Blinken.

Blinken has since said human rights will be “central” to the US-Egypt relationship and personally raised the issue with Sisi in May. Last month, Biden’s top diplomat hosted Egyptian Foreign Minister Sameh Shoukry for a two-day strategic dialogue that covered rights concerns, but ended with no public commitments from Cairo.

Advocacy groups say Sisi’s government has failed to implement meaningful human rights reforms since Biden took office, and have called on the administration to withhold military financing and weapons sales as leverage.