Fourteen US lawmakers are calling for the release of Alaa Abdel-Fattah, a jailed activist on hunger strike in Egypt. 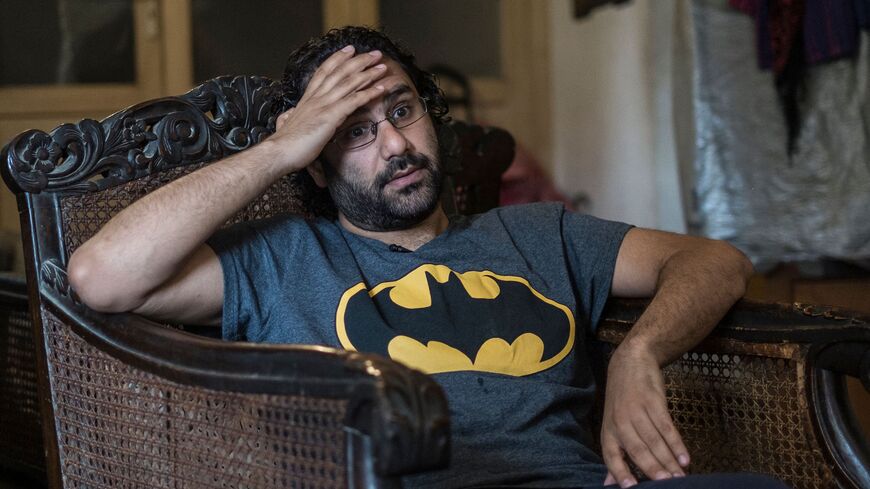 Egyptian activist and blogger Alaa Abdel-Fattah gives an interview at his home in Cairo on May 17, 2019. - KHALED DESOUKI/AFP via Getty Images

A group of Democratic lawmakers penned a letter Friday expressing solidarity with British members of parliament who are pushing Egypt to release Alaa Abdel-Fattah, a prominent activist on hunger strike who has spent most of the past decade in prison.

Abdel-Fattah was a key protest figure in the 2011 revolution that toppled longtime Egyptian President Hosni Mubarak. After spending more than two years in pre-trial detention, an emergency court handed Abdel-Fattah a five-year prison sentence in December 2021 for “broadcasting false news” following a trial that rights groups described as grossly unfair.

Abdel-Fattah is currently held at Egypt’s Wadi El-Natrun correctional facility. The activist has spent more than 100 days on hunger strike protesting his lack of consular visits and legal counsel.

“We urge the Egyptian government to heed your calls to immediately release Alaa and we stand ready to support your efforts,” the 14 lawmakers led by Congress’ Egypt Human Rights Caucus co-chairs Reps. Don Beyer (D-Va.) and Tom Malinowski (D-N.J.) wrote in a letter to British House of Commons Speaker Lindsay Hoyle.

“His deteriorating health warrants immediate action. The Egyptian government’s tepid response to several UK overtures on Alaa’s behalf make it clear that the current quiet diplomacy will not secure his freedom,” read the letter obtained by Al-Monitor.

Members of the UK Parliament have previously called on their government to pressure Cairo to allow consular access and ultimately release Abdel-Fattah within Egypt or to the United Kingdom. His family has accused UK Foreign Secretary Liz Truss of failing to take up Abdel-Fattah’s case.

Why it matters: Under President Abdel Fattah al-Sisi’s watch, Egyptian security forces have jailed tens of thousands of perceived government critics, including activists, journalists and lawmakers, on charges rights groups say are baseless. Many of those political prisoners are held in pretrial detention.

The Biden administration pledged to make human rights “central” to the US-Egypt relationship. In a joint statement that followed their meeting on the sidelines of the recent summit in Jeddah, President Joe Biden and Sisi “emphasized their mutual commitment to a constructive dialogue on human rights.”

Cairo launched a new human rights strategy last year, and in recent months has released a number of prominent political detainees. But advocacy groups say Sisi’s government has shown little desire to implement meaningful rights reforms since Biden took office, and have called on the administration to withhold military financing and weapons sales as leverage.

In January, the Biden administration chose to reprogram some, but not all, of the annual military assistance that Congress had conditioned on Egypt enacting certain human rights reforms.

What’s next: The White House has invited Sisi to attend the US-Africa Leaders Summit this December. He last visited Washington in April 2019 for an Oval Office meeting with former President Donald Trump.

Know more: Shahira Amin has this deep dive on Abdel-Fattah and his conditions inside prison.