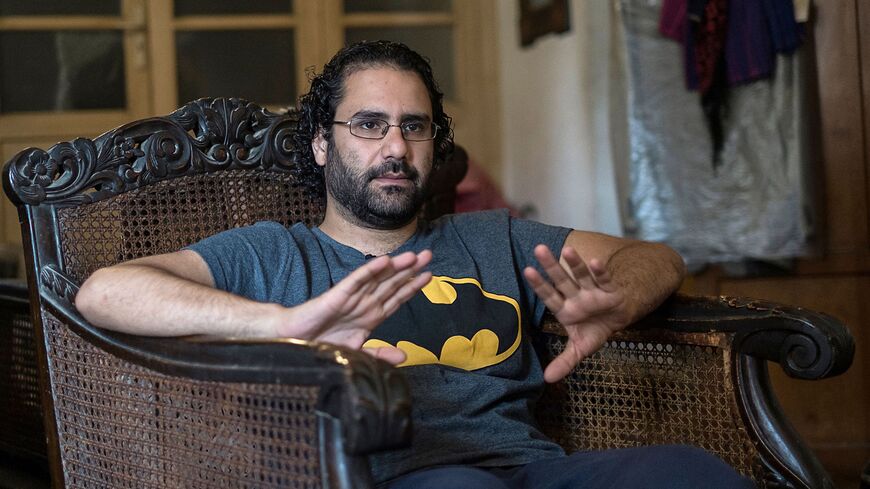 Egyptian activist and blogger Alaa Abdel Fattah gives an interview at his home in Cairo on May 17, 2019. - KHALED DESOUKI/AFP via Getty Images

A state security court in Cairo handed a five-year prison term to activist and software developer Alaa Abdel-Fattah, who was a leading figure in the 2011 uprising that overthrew Egypt’s longtime President Hosni Mubarak.

"The judge was too cowardly to even inform us," Abdel-Fattah’s sister Mona Seif tweeted on Monday.

Lawyer Mohamed el-Baqer and blogger Mohamed “Oxygen” Ibrahim were each sentenced to four years on the same charges.

The rulings still require final approval from Egyptian President Abdel Fattah al-Sisi. Because the verdicts were issued under Egypt’s 2017 emergency laws, they cannot be appealed.

The three men have been detained since the Egyptian security forces cracked down on anti-government protests in September 2019. According to Human Rights Watch, their trial was marred by numerous fair trial and due process violations. Abdel-Fattah’s family says he has been tortured in pre-trial detention.

Abdel-Fattah already spent five years in jail before his release in March 2019. He was rearrested along with Baquer and Ibrahim later that year on charges rights groups said were politically motivated.

Rights groups say tens of thousands of people have been jailed since Sisi came to power in 2013. Last month, an Egyptian court found Hossam Bahgat, the founder and executive director of the Cairo-based Egyptian Initiative for Personal Rights, guilty of insulting the country’s election authorities. He was fined 10,000 Egyptian pounds (about $640).

The detentions have been a source of friction with the Biden administration, which pledged to make human rights “central” to the US-Egypt relationship. In October, Cairo released its first-ever human rights strategy, but advocacy groups say Sisi’s government has failed to implement meaningful reforms.