Egypt’s Supreme State Security Prosecution referred a number of imprisoned human rights lawyers and prominent political activists before an emergency court offering no means of appeal against the issued rulings and sentences. 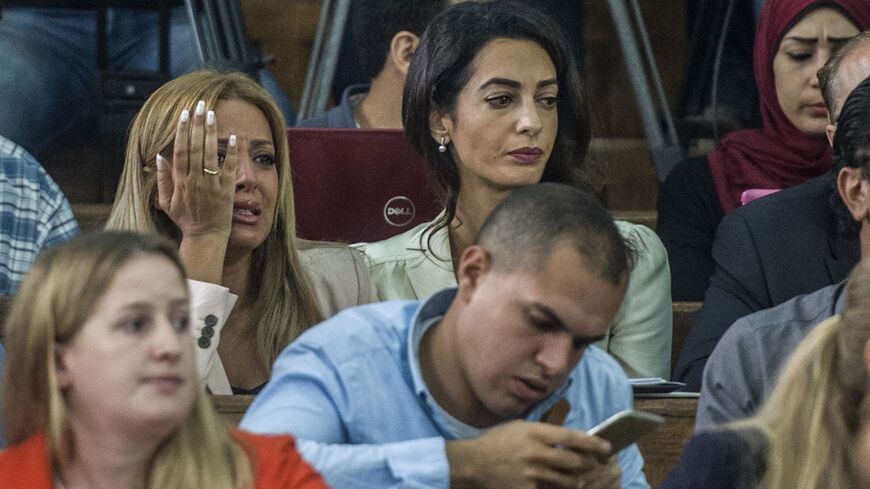 Marwa Fahmy (L), the wife of Canadian Al-Jazeera journalist Mohamed Fahmy (unseen), reacts as she sits next to Amal Clooney (C), the human rights lawyer representing Fahmy, during the trial of her husband and Egyptian Baher Mohamed, both accused of supporting the blacklisted Muslim Brotherhood in their coverage for the Qatari-owned broadcaster, on August 29, 2015, in Cairo. - KHALED DESOUKI/AFP via Getty Images

The move triggered outrage among rights activists, as emergency state security courts do not have jurisdiction over civilians. Also, the detained activists have been in pre-trial detention for durations exceeding the jail time stipulated in the Penal Code — although the law expressly provides for their release.

In 2013, then-interim President Adly Mansour approved amendments to the Criminal Procedure Code, setting pre-trial detention to 24 months maximum. Once this time is served, the accused must be released. Egyptian authorities, however, often ignore this law.

Among those who were recently referred to the emergency court in Cairo is the former spokesman for the liberal Civil Democratic Movement, Yahya Hussein Abdel Hadi. He has been in pre-trial detention since his arrest in January 2019, serving 10 months above the legal term.

Lawyer Mohammed el-Baker, the founder and director of the Adalah Center for Rights and Freedoms; political activist Alaa Abdel-Fattah; and Mohammad Ibrahim Radwan, a blogger also known as “Oxygen,” are also among those brought before the emergency court. The three have been in pre-trial detention since September 2019.

Egyptian human rights organizations condemned the activists’ referral to trial before an emergency court. In a joint statement published by the Egyptian Front for Human Rights on Oct. 19, the organizations decried the move as “a new escalation in human rights crimes in Egypt.”

They revealed that the defendants’ attorneys were not informed of the referral decision. “The prosecution refused to share the charges filed with their lawyers, and during the hearing, the court denied a request to allow them [lawyers] to photocopy the case files or consult with their clients alone,” the statement read.

It further added, “The undersigned organizations denounce the referral of these activists to trial in exceptional courts, the verdicts of which are not subject to appeal and which do not adhere to basic due process standards. We hold the president and public prosecutor responsible for the life, and physical and psychological safety of Abdel Fattah and Oxygen.”

The organizations called pre-trial detention "a form of open-ended punishment by recycling detainees into new cases with identical charges once they have served the maximum legally-allowable duration" and "a flagrant circumvention of the law by a judiciary that does not enjoy a modicum of independence.”

Human rights lawyer and former presidential candidate Khaled Ali told Al-Monitor that as well as the high-profile cases of Baker, Abdel-Fattah, Ibrahim and Abdel-Hadi, three more defendants held in pre-trial detention for two years were referred before the emergency court in July: human rights lawyer and former parliamentarian Zyad el-Elaimy, along with journalists and politicians Hossam Moanis and Hisham Fouad. "The three had been in pre-trial detention since June 2019,” he said.

Ali said he submitted requests to the Supreme State Security Prosecution and the Attorney General to implement the law and release the detainees. His requests fell on deaf ears and the activists were referred to trial. “All the politicians, human rights defenders and activists are facing trial over bogus charges of spreading false news, statements and rumors about the internal conditions of the country.”

Mona Seif, sister of Abdel-Fattah, spoke about the details of the first hearings of the trial of her brother, Baker and Ibrahim on Oct. 18. In a statement she posted on Facebook, she exposed the legal violations that marred the trial, most notably the court’s refusal of the defense’s requests.

She added, “The defense requested to peruse the case papers and obtain a photocopy thereof for their examination and for submitting the appropriate pleas. The defense also requested the release of the defendants because their imprisonment is currently against the law.” All requests were dismissed by the court, she stressed.

Meanwhile, the trials of the activists have been postponed.

A legal researcher in one of the human rights organizations that signed the Oct. 19 joint statement told Al-Monitor, “Referring activists, politicians, and human rights defenders to an emergency state security court is a dangerous move.”

“The rulings of these courts are final and cannot be appealed or overturned before other courts, which is a fundamental violation of human rights, the right to a fair trial and the defendants' right to appeal the verdicts issued against them,” said the researcher, who wished to remain anonymous.

“Once the verdict is issued against the defendants, it is executed immediately without any possibility for retrial. The only available means of objection is filing a grievance before the military ruler with the aim of overriding the ruling. However, this has never happened before,” he added.