More than 50 US members of the US Congress called for Egyptian journalists, lawyers and rights activists to be released in a letter addressed directly to President Abdel Fattah al-Sisi. 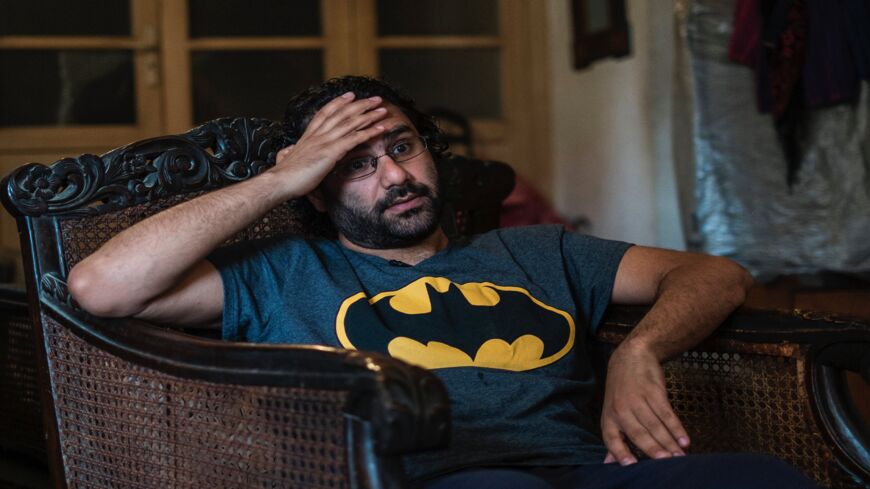 Imprisoned Egyptian political activist and blogger Alaa Abdel Fattah gives an interview at his home in Cairo on May 17, 2019. The days and nights of Alaa Abdel Fattah, Egypt's leading dissident, follow a disorienting rhythm where he is freed every morning from a filthy prison cell and then jailed again at sunset. - KHALED DESOUKI/AFP via Getty Images

More than 50 members of the US Congress signed a letter urging Egyptian President Abdel Fattah al-Sisi to release imprisoned human rights and political activists, lawyers, journalists and other prisoners of conscience.

US lawmakers also named more than a dozen other Egyptians behind bars for human rights and political activities, as well as US-Egyptian citizens who remain in prison in Egypt despite the release of two Americans in the past year.

The letter urges Sisi to stop the Egyptian government’s use of indefinite pre-trial detention except in cases of “last resort.”

“Since assuming the presidency in 2014, Sisi has presided over systematic repression in Egypt, codifying new legal frameworks to criminalize internationally protected freedoms, including the freedom of association or assembly,” read a statement by Rep. Khanna’s office.

Why it matters:  The letter marks the first time so many lawmakers are addressing Sisi directly in calling for the release of Egyptian political prisoners. But it falls short of threatening to condition US military assistance to Egypt on Sisi’s human rights record.

Egypt’s regime has even been accused of killing detainees in staged firefights between security forces and alleged terrorists as a way to execute them.

The former US administration chose to maintain its partnership with the Sisi regime after it massacred as many as a thousand peaceful protesters at Rabaa al-Adawiya Square in Cairo in 2013 — Trump has taken an overly permissive attitude toward Sisi’s repression.

Trump has called Sisi “my favorite dictator” and “a fantastic guy.” CNN reported last week that the Mueller investigation into foreign interference in the 2016 election looked into whether an Egyptian bank had transferred $10 million to Trump’s campaign, although the case was shut down due to lack of evidence.

The report has raised renewed questions about Trump’s relationship with Egypt’s dictator ahead of the 2020 US presidential election.

What’s next:  The lawmakers’ letter may be a bellwether for a potential Joe Biden presidential administration’s future tone toward the regime in Cairo.

But even if a potential Biden administration would be more ideologically predisposed to conditioning some aid to Egypt, it will be discouraged from doing so by strategic pressures, as Egypt is increasingly looking to Russia to fulfill its desire for new military hardware.