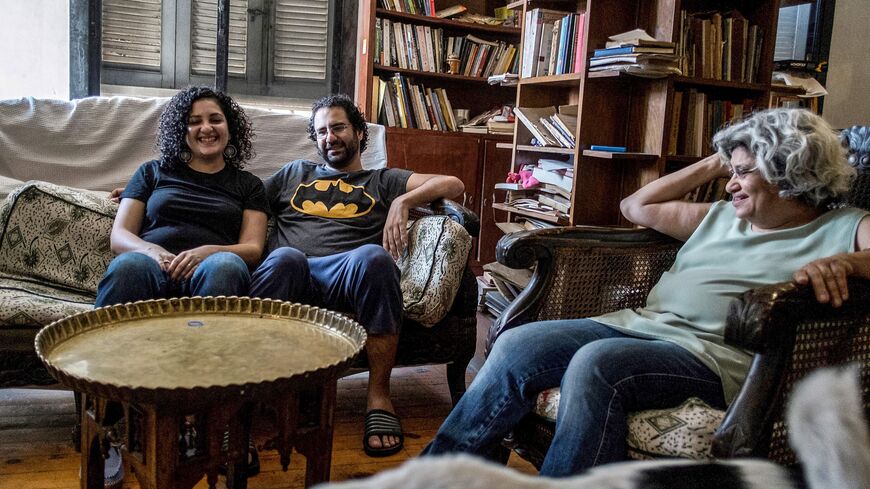 In a surprise move in late April, dozens of Egyptian political prisoners, including journalists, opposition activists and lawmakers, were released from pretrial detention — the second batch since July last year.

The detainees had been behind bars on charges of spreading fake news and/or collaborating with a terrorist organization: accusations that are frequently leveled at government critics to stifle dissent.

The releases came days ahead of the Eid Al Fitr holiday, when some prisoners are often granted amnesty and set free. But it is extremely rare — unheard of, even — for Egypt to release prisoners of conscience as part of its annual amnesty.

Thousands of other opposition figures continue to languish behind bars for no crime other than peaceful dissent. Still, the move has raised rights campaigners' hopes for an easing of the broad security crackdown on dissent, in place since 2013.

But hope is dimming for the release of Alaa Abdel Fattah, a software engineer who has spent much of the last ten years in prison. He has now entered his sixth week on hunger strike in Torah high-security prison to protest the dire conditions of his detention and of Egypt's jails in general.

Convicted of spreading false news, Abdel Fattah was arrested in September 2019 (along with his lawyer, Mohamed El Baqer) while on a five-year probation period requiring him to spend 12 hours of each day at a police station. He had been released only six months earlier after spending four years behind bars.

Abdel Fattah received a five-year sentence last December after spending more than two years in pre-trial detention. He has been denied access to books and writing material and has not been exposed to sunlight in months.

"His visitations have been cut to one family member for 20 minutes a month, through glass, with not a moment of privacy or contact," according to his sisters Mona and Sanaa Seif.

Now, time is running out for the jailed dissident who is also an icon of the Jan. 25 uprising against Mubarak. Yet calls by international rights groups to free Abdel Fattah have so far fallen on deaf ears. His sisters claim that he has been subjected to torture while in prison.

Abdel Fattah recently received British citizenship, a move that has raised his family's hopes of pressure on the authorities for his release. According to Mona Seif, "The British ambassador to Egypt and the consular team are in touch with the family, following all developments closely."

"They acknowledge the grave injustice inflicted on Alaa and are trying to help," she told Al-Monitor. But, she added, authorities have not answered the formal request for a meeting filed by the embassy team in December.

The UK has so far only expressed "regret" over the verdict. A British Foreign, Commonwealth and Development Office spokesperson said, "We do not consider the outcome consistent with recent positive steps  to improve human rights."

The "positive steps" are the lifting of the longstanding emergency law in October and the release of a new human rights strategy.

Some rights groups, however, are skeptical, describing the new strategy as "cosmetic." The Cairo Institute for Human Rights Studies criticized the strategy as "rooted in the denial of the depths of Egypt's human rights crisis while aiming to deceptively convey to the international community and donor states that political reform is proceeding apace."

But Cairo has taken additional measures to show it is serious. At an Iftar banquet in late April, President Abdel Fattah El Sisi announced the reactivation of a Presidential Pardon Committee, formed in 2016. The committee, set to meet May 14, is tasked with reviewing cases of prisoners and identifying those unjustly detained.

According to lawyer and committee member Tarek El Awady, criteria for release include "not having resorted to violence against the state and its institutions" and "those that do not have blood on their hands."

Prisoners whose pretrial detentions have exceeded two years — the maximum allowed — are also eligible for release or trial, El Awady told Al-Monitor. He would not cite any prisoner by name.

President Sisi has also called for a national political dialogue between political parties and youth leaders and coalitions representing the state. But his goodwill gestures have been taken with a grain of salt by some rights advocates and organizations. In a joint statement released May 8, rights organizations called for amendments to the pre-trial detention law, increasingly used by the authorities to circumvent the maximum periods of pre-trial detention.

Using the practice of "rotation," prosecutors often level new accusations against soon-to-be-released detainees just as their pretrial detention periods are about to end, subjecting them to de facto indefinite detentions.

In a joint statement  by the Civil Democratic Movement (a liberal political movement formed in 2017) and veteran journalist Khaled Dawoud, the signatories called for a national dialogue that would culminate in "practical and implementable solutions to save the nation and resolve its problems rather than a cosmetic step."

They requested that the dialogue take place under the auspices of the presidency with equal representation by the state and the opposition, and with the participation of legislators and government.

They also requested that the dialogue be launched immediately to draft a clear action plan with a specific time frame. Furthermore, they demanded "all dialogue sessions should be viewed by the public and broadcast live via local TV channels." The group further proposed that a technical secretariat prepares for the dialogue and document all recommendations.

The efforts may be too little, too late for Abdel Fattah, who grows weaker by the day and has already bid his family farewell.

But his book "You have not yet been defeated," a compilation of essays and tweets he has written over the past decade — as well as messages scribbled in pencil and smuggled out of his prison cell — bears testament to his strength and resolve.

"Our sin was pride, not treachery," writes Abdel Fattah in the book. He urges fellow activists to "Fix your own democracy," an exhortation perhaps for the young pro-democracy activists to keep the spirit of the revolution alive. Naomi Klein writes in the foreword, "This text that you hold is living history." Abdel Fattah's younger sister Sanaa, who has also been imprisoned for her activism, is currently on a US tour promoting the book.

If Abdel Fattah dies, he may well become a new thorn in the side of the authorities, already struggling to quell a rise in public discontent over rising prices of food, fuel, and basic commodities. Releasing him could be one way of demonstrating the state's seriousness to pursue democratic reforms and turn the page over past excesses.

Mohamed Anwar Sadat, a former member of parliament who negotiated the recent releases, told Al-Monitor, "It is an ongoing effort; we shall not stop until all political prisoners are released."  Sadat noted that the release of more political detainees is in the pipeline. Abdel Fattah's family and friends are hoping against all odds, he will be among them.