The Arabic Network for Human Rights Information said the decision to close its doors came after "many strenuous attempts to continue to operate, despite the difficult conditions.” 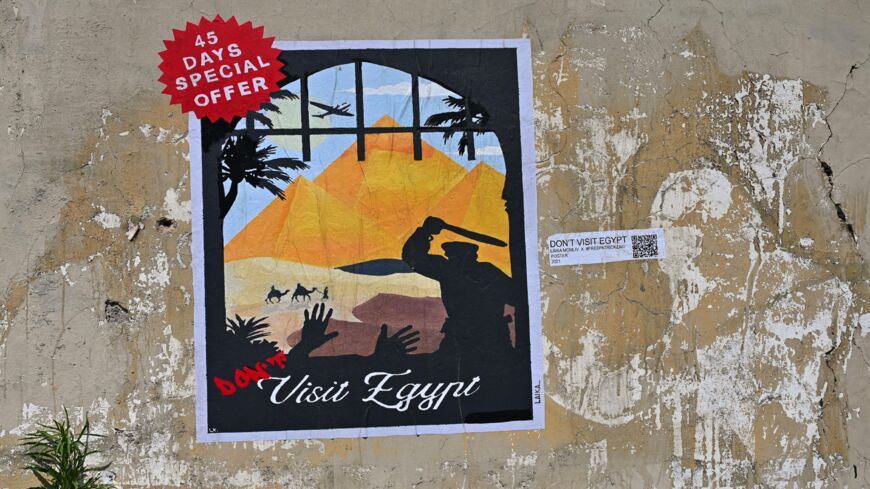 A poster by Italian street artist Laika entitled "Don't visit Egypt" is pictured on a wall near the Egyptian Embassy on June 16, 2021, in Rome in protest against the recent extension of the detention in Egypt of a 29-year-old Egyptian student Patrick Zaki. - ALBERTO PIZZOLI/AFP via Getty Images

One of the few remaining human rights groups in Egypt announced on Monday that it was suspending operations.

In a statement on Monday, the Arabic Network for Human Rights Information (ANHRI) said its decision to shut down came after “many strenuous attempts to continue to operate, despite the difficult conditions.”

The Egyptian legal organization, which was founded in 2004, worked to defend freedom of expression in Egypt by training journalists, documenting violations and raising awareness.

ANHRI said there was “severe and hostile" targeting of its staff by Egyptian security forces who allegedly arrested, assaulted and tried to recruit ANHRI staffers as informants. ANHRI also remains under investigation in Case 173, a long-running probe in Egypt that accuses civil society and human rights groups of illegally receiving foreign funding.

The group’s executive director, Gamal Eid, said in a statement that ANHRI’s staff will “continue to be lawyers who have a conscience” working alongside Egypt's few remaining human rights organizations.

Since President Abdel Fattah al-Sisi came to power in 2013, the Egyptian government has jailed tens of thousands of perceived government critics, including journalists and activists who Cairo says pose a national security threat, according to Human Rights Watch.

In September, the Egyptian government unveiled a national human rights strategy, as we reported here.

The Biden administration, which pledged to put human rights at the center of the US-Egypt relationship, has expressed concern over the country’s targeting of activists, including Hossam Bahgat, Alaa Abd El-Fattah, Mohamed el-Baqer and Mohamed “Oxygen” Ibrahim.