The Egyptian government crackdown on civil society organizations has intensified with the arrest of a prominent human rights lawyer. 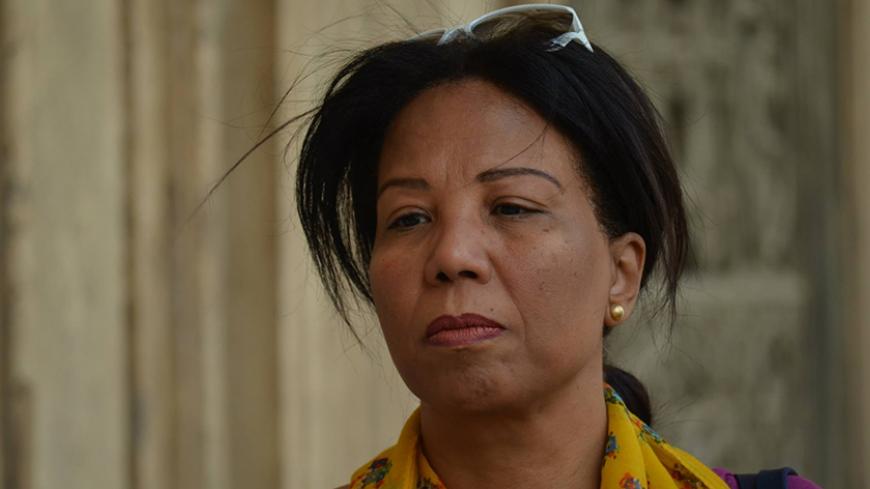 Egyptian human rights lawyer Azza Soliman, who was arrested at her home Dec. 7, is seen on July 11, 2014, after she was released on bail following a previous arrest by security forces. - Facebook/Azza Soliman

Egyptian security forces arrested prominent human rights lawyer Azza Soliman at her home in Cairo on Dec. 7. An investigative judge interrogated Soliman, the founder of the Center for Egyptian Women's Legal Assistance, a nonprofit that provides legal and social services to women, before she was released on bail of 20,000 Egyptian pounds (around $1,100).

According to Soliman's lawyer, Mahmoud Belal, Soliman was charged with "receiving foreign funding to harm the state’s interest; tax evasion; and establishment of an entity that conducts activities similar to those of a [nongovernmental organization]."

At least 12 civil society representatives are facing prosecution in Egypt's “NGO foreign-funding case” — as dubbed by the Egyptian media — on charges of receiving illegal foreign funding "to harm national security and sow chaos," and Soliman is the first of the 12 to be arrested. Like those prosecuted in similar cases before her, she has been banned from traveling, and all her assets, as well as those of her organization, have been frozen.

On Nov. 19, airport security prevented Soliman from boarding a flight to Jordan to participate in a human rights training session and was told that her name was on a travel ban list. “I was not shown any official documents supporting this claim, nor was I informed of the travel ban prior to my trip,” she told Al-Monitor. Soliman said that she had actually been a lawyer representing a defendant in the NGO foreign funding case before discovering she was one of the defendants herself. Later that same day, she learned that her assets had been frozen, a fate suffered by at least six other prominent rights defenders and three civil society organizations accused in the foreign-funding case.

On Sept. 17, a Cairo criminal court froze the assets of the following civil society members: Gamal Eid, the founder of the Arabic Network for Human Rights Information; Hossam Bahgat, the founder of the Egyptian Initiative for Personal Rights; Bahey Eldin Hassan, the founder of the Cairo Institute for Human Rights Studies; Mostafa al-Hassan, the director of the Hisham Mubarak Law Center; and Abdel Hafez Tayel, the director of the Egyptian Center for the Right to Education. Amnesty International called the decision "a reprehensible blow to Egypt’s human rights movement.”

Then, in early November, the Egyptian Central Bank issued directives to freeze the bank account of Al Nadeem Center for the Rehabilitation of Victims of Violence. Authorities forcibly shut down the center in April for allegedly “violating the law by shifting its focus from medical activities to human rights issues," but the center has continued to document alleged rights violations against detainees by the Interior Ministry.

The crackdown on Egypt’s rights defenders has intensified in recent months amid increased government fears of another popular revolt, similar to the one in 2011 that forced Hosni Mubarak to step down as president. The crackdown also takes place amid painful austerity measures imposed by the government in November that are intended to secure a $12 billion loan from the International Monetary Fund. In early November, some Egyptian opposition figures based in Turkey (believed to be Muslim Brotherhood sympathizers) called for a “revolution of the poor” to take place in Egypt that same month. The anticipated protests failed to materialize, but the anger on the street became palpable, as food prices increased and basic commodities were out of stock. Rights groups warned that the government repression of civil society organizations would only fuel the anger and could prompt a fresh outbreak of civil unrest. But the warnings have thus far gone unheeded.

Travel bans and asset freezes are not the only measures of intimidation used by the regime to stifle the activities of human rights activists. On Dec. 1, the authorities shut down with no explanation two Al-Karama libraries in the impoverished districts of Tora and Dar al-Salam. The libraries were among five branches — all in impoverished neighborhoods — established by rights lawyer Gamal Eid with the funds he received from winning the Roland Berger Human Dignity Award in 2011. Eid wanted to give children in underprivileged districts access to books that they otherwise could not afford. A third branch in the Zagazig district has been threatened with closure after employees received interrogation summons by prosecutors following the closure of the other two branches.

The library closures came on the heels of parliament’s approval in November of a controversial bill regulating the activities of nongovernmental organizations. The draft law, which has been sent to the Council of State for review, calls for jail terms of up to five years and fines of up to a million Egyptian pounds ($63,000) for NGOs that carry out their activities without prior authorization from security agencies. The bill also stipulates the creation of a “national authority” comprising representatives of the intelligence branch, the army and the security services to oversee the funds and the activities of foreign NGOs. Currently, foreign NGOs are required to obtain a permit and to pay up to 300,000 Egyptian pounds ($16,400) to have a presence in the country. Moreover, the bill prohibits all NGOs from conducting research studies or public surveys without government approval and requires the NGOs to obtain state authorization before publishing any such polls or studies.

The draft law has drawn condemnation from local and international rights advocates as “a step backward for the country.” Mohamed Zaree, the head of the Egypt program at the Cairo Institute for Human Rights Studies (whose assets have been frozen by court order), slammed the bill. "It was drafted by counter-revolutionary forces who want to make sure there can be no repeat of the January 25, 2011, uprising,” said Zaree. He further called the bill “unconstitutional,” noting that it violates Article 75 of the constitution, which merely requires registration of NGOs by notifying the Ministry of Social Solidarity, without any government interference.

“If this law passes, it would be a farce to say that Egypt allows ‘nongovernmental’ organizations, since all would be subject to the security agencies’ control," Whitson said in a statement on the Human Rights Watch website.

Lawmaker Mohamed Abu Hamed, a member of the parliamentary committee that drafted the law, insisted that the draft law was compatible with the constitution, which stipulates that NGO activities should not threaten national security. Abu Hamed accused Human Rights Watch of “being politicized” and “seeking to spread chaos and disrupt national security” in statements to Ahram Online.

Foreign Minister Sameh Shoukry also rejected foreign criticism of the law, saying that Egypt does not accept “the guardianship of foreign countries.”

The government clearly has no intentions of backtracking or of easing its crackdown on rights defenders.

“It’s all-out revenge,” Eid told Al-Monitor. “They are out to get anyone who had a role in the January 25 Revolution, especially human rights activists whom they believe led the movement for change."