Just before Egyptian President Abdel Fattah al-Sisi's visit to Washington, the minister of social solidarity announced that a new law governing the operations of nongovernmental organizations will be drafted. 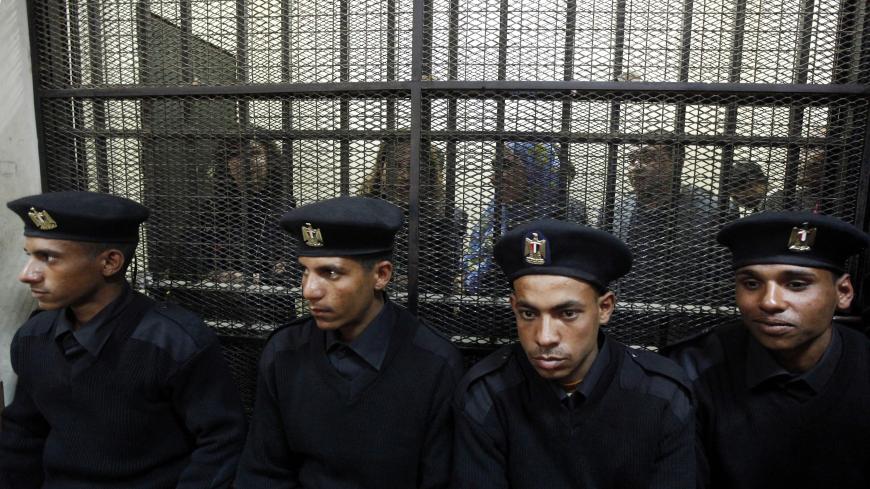 Some of the fourteen Egyptian activists who were accused of working for unlicensed non-governmental organizations (NGOs) and receiving illegal foreign funds, stand in a cage during the opening of their trial in Cairo, Egypt, Feb. 26, 2012. - REUTERS/Mohamed Abd El Ghany

Leading up to Egyptian President Abdel Fattah al-Sisi’s Tuesday meeting with US President Donald Trump, intense lobbying efforts were underway in Washington from civil society groups and some US officials for the American leader to raise human rights concerns with his counterpart.

The planned constitutional amendments in Egypt that would allow Sisi to stay in office until 2034 and cement power in the country’s military establishment are alarming to civil society groups and members of US Congress. Another longstanding concern has been Egypt’s laws pertaining to non-governmental organizations.

In November 2016, Egypt’s parliament voted overwhelmingly to pass what domestic and international critics claim is a draconian piece of legislation that restricts or completely inhibits the ability of NGOs to operate. The law, which was ratified in May 2017 by Sisi, requires an onerous registration processes, puts crippling restraints on foreign funding and criminalizes peaceful and civic activism. Failure to comply can result in a five-year prison sentence and up to a million Egyptian pounds (about $55,000) in fines.

A number of NGOs, including the Al-Nadeem Center for Rehabilitation of Victims of Violence, has already had their assets frozen and much of their work severely curtailed. Feminist organizations like Nazra for Feminist Studies and others working to improve the rights of women have been caught in the crackdown.

Many leading human rights campaigners have also had their personal assets frozen and been barred from traveling outside of Egypt. Among them are director of the Arabic Network for Human Rights Information Gamal Eid, Mohamed Zahree of the Cairo Institute for Human Rights Studies, Mozn Hassan from Nazra for Feminist Studies and investigative journalist Hossam Baghat.

However, persistent local and international opposition to the law may have had an affect. At the World Youth Forum in Sharm El-Sheikh in November, Sisi said that the law was “restrictive and reflects a skeptical view of NGO activities.” He suggested that a committee be formed to hold hearings on the law and that parliament produce an amended version.

On Friday, Egypt’s Minister of Social Solidarity Ghada Waly announced that the committee had decided to draw up a new law entirely instead of amending the first. She said that the new draft addresses the concerns of civil society and is in line with Egypt’s 2014 constitution.

Al-Monitor contacted two spokespeople from the Ministry of Social Solidarity but both refused to comment.

Human rights defenders in Egypt are skeptical of the proposed changes.

Eid told Al-Monitor that he believes the law is only being reconsidered because of pressure from the United States. “This is absolutely not out of any respect for civil society in Egypt,” he said. “The regime only cares for buying the satisfaction of the American administration and European governments and really has nothing to do with any care for civil society and human rights. I don’t think the new laws will be any good.”

Zaree told Al-Monitor, “It’s pure propaganda to avoid criticism during the US visit and comes from international pressure,” he said. “I just don’t buy the statement from the social solidarity minister.”

International pressure has in some cases been successful — in 2017, US-Egyptian citizen Aya Hijazi was released after over three years in prison on charges of child abuse after founding an NGO to help street children. It was reported that Trump personally pushed for her release.

In December 2018, an Egyptian court acquitted dozens of aid workers, including 15 American citizens. The case dates back to 2013, when 43 Americans, Egyptians and other Arabs were sentenced to varying jail times for crimes including operating NGOs without the required approvals.

NGO operations have been in the government’s crosshairs since 2011, when authorities raided 17 pro-democracy and rights groups. They were accused of being part of a foreign conspiracy against Egypt after former President Hosni Mubarak was overthrown in the mass uprising on that year.

The continued international pressure on Egypt seems to have pushed Sisi to push for the law to be reformed or abolished, according to local independent news website Mada Masr. A source from the Parliament’s General Secretariat told the website that the “unrelenting pressure coming from the US government since the draft legislation’s ratification” pushed Sisi to issue the directive.

In May, US Senators Lindsey Graham and late John McCain criticized the draft legislation as "draconian." In February, US Democratic Senator Patrick Leahy argued in the Senate that “unchecked repression has come to define the government of President Sisi.”

But Egypt watchers don’t expect Trump to pressure Sisi during his current visit on the NGO issue.

“On the contrary, I expect Trump will shower Sisi with praise — that has been the pattern thus far,” H.A. Hellyer, senior fellow at Atlantic Council and Royal United Services Institute in London, told Al-Monitor.

“On a wider level, the Beltway via Congress and opinion formers, however, may well put a lot of pressure on Cairo particularly due to human rights concerns — but without Trump’s administration supporting that, I do not expect Cairo to consider much change,” Hellyer said.

It is yet unknown what Trump and Sisi discussed behind the scenes. But in a press conference following a meeting between the two leaders, Trump responded to a question about the constitutional changes in Egypt by saying of Sisi, “I think he’s doing a great job … great president.”

“I hope there is pressure from the US on human rights concerns,” Zaree told Al-Monitor. “But I really don’t have high expectations from the visit.”