Harrowing end to 2013 for civil society in Egypt

It’s been a harrowing end to 2013 for activists, journalists and opposition, who have faced crackdowns, arrests, imprisonment and death when opposing or even just working under the rule of the military-backed government that ousted Mohammed Morsi. 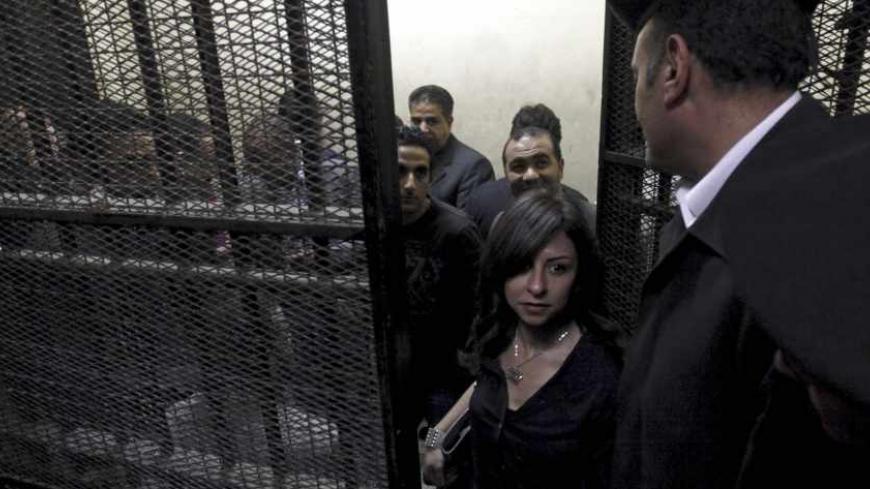 CAIRO — If human rights defender Nancy Okail were to return to Cairo today to visit her twin toddlers, she would be imprisoned.

The former director for Freedom House in Egypt, Okail fled to Washington last year when it became clear that trumped-up charges against her and 42 other nongovernmental organization workers were sticking. A high-profile raid of their offices in the last days of 2011 by the then military government was followed by indictments accusing staff of working for unlicensed institutions and receiving illegal funds.

This year, again under military rule, all were found guilty. Okail was the only Egyptian sentenced to five years in prison in absentia. She can only challenge the sentence if she returns to Egypt and appeals it from prison, she said.

This month, as news broke of a raid of the Egyptian Center for Economic and Social Rights office in Cairo that later led to the imprisonment of activist Mohamed Adel, Okail tweeted that she had to check the article several times “to make sure that we are not in December 2010.” As the year ends, she and other experts are comparing the Egypt of today to pre-revolution Egypt, as civil society activists and Islamists alike are facing the same crackdowns and treatment seen under the 30-year rule of toppled President Hosni Mubarak.

It’s been a harrowing end to 2013 for activists, journalists and opposition, who have faced crackdowns, arrests, imprisonment and death when opposing or even just working under the rule of the military-backed government that ousted Islamist President Mohammed Morsi. In the past two weeks, Egypt has also been rocked by several bloody bombings, and now faces deepening polarization as it pushes forward with a referendum on an amended constitution that if passed would ban religious-based political groups and allow for military trials of civilians.

The irony, Okail says, is that activist Alaa Abdel Fatah was sitting in prison in late December just as Mubarak’s son Alaa was acquitted of embezzling public funds, along with his brother Gamal and former Prime Minister Ahmed Shafiq. In a strange twist of events that is almost expected amid the drama unfolding daily in Egypt, Shafiq, who lost the presidential race to Morsi, said recently he would return to Egypt and run for president again if popular Gen. Abdel Fatah al-Sisi does not. Meanwhile, the ousted Morsi is facing trial.

Today, Fatah remains in prison, charged with violating a prohibitive new protest law that requires notifying the government before demonstrating. A campaign has just been launched demanding the government set a date for his trial, and the trials of 24 other activists. Adel and two other prominent activists, Ahmed Maher and Ahmed Douma, received speedy trials this month — “the quickest ever,” Okail said — and were sentenced to three years in prison for charges related to the protest law.

The activists have now launched a hunger strike to protest ill treatment by their jailers. A hunger strike was also declared late this month by more than 450 Muslim Brotherhood members imprisoned in Egypt following Morsi’s ouster over “inhuman treatment” in prison. A statement said that prisoners are protesting the banning of visits, heavy surveillance during visits, “brutal abuse inside the prison, unclean wards, overcrowded cells and rampant roach and insect infestation."

Al Jazeera journalist Abdallah Elshamy is also on hunger strike, along with 17 other fellow prisoners in protest of “terrible conditions and ill-treatment,” tweeted his brother, photojournalist Mosa’ab Elshamy, who in turn has called a collection of his favorite photographs taken in 2013: “A year of broken hopes.”

“With no sunlight or fresh air, @abdallahelshamy was allowed out of his cell only once (for 30 minutes) in the past seven days,” Elshamy tweeted about his brother, who was arrested in August during a violent crackdown on sit-ins protesting Morsi’s ouster.

This week, two other journalists, a producer and cameraman who had been interviewing Brotherhood members for Al Jazeera, were arrested by Egyptian police at a Marriott hotel room in Cairo amid a crackdown on the Brotherhood and its supporters. The government declared the Brotherhood a "terrorist organization” in response to recent bombings, the first of which the Brotherhood denounced and was claimed by the Sinai-based militant group Ansar Bayt al-Maqdis.

Watching from a distance as the head of the Tahrir Institute for Middle East Policy in Washington, Okail said recent events had been “unfolding for a long time.”

“It’s a continuous crack down on civil society and all forms of activists,” Okail said. “It's not just a so-called 'war on terror' only targeting Islamists. They are targeting every single activist with the exact same claim of 'national security' — a very loose and vague term. It’s the same claim they used against us, it’s the same claim Mubarak used against anyone in opposition.”

The manner in which she experienced a government crackdown — first with threats, then interrogation, then a raid, then arrests and politically motivated charges — taught her a valuable lesson, Okail said, that the end goal of silencing opposition in Egypt was and continues to be pursued by any means necessary.

As Egypt prepares to mark the third anniversary of a fleetingly hopeful uprising that has delivered among the most brutal crackdowns in Egypt’s modern history, Okail and others are not holding onto any illusions. “Even more darker days are ahead of Egypt,” wrote activist Gigi Ibrahim on her Facebook page, in response to the government’s announcement of harsh punishment for Muslim Brotherhood members.

“We're going back to the worst crackdowns on everyone, and people don't realize it's going to extend to the entire population” Okail said. “Everything is being reversed.”