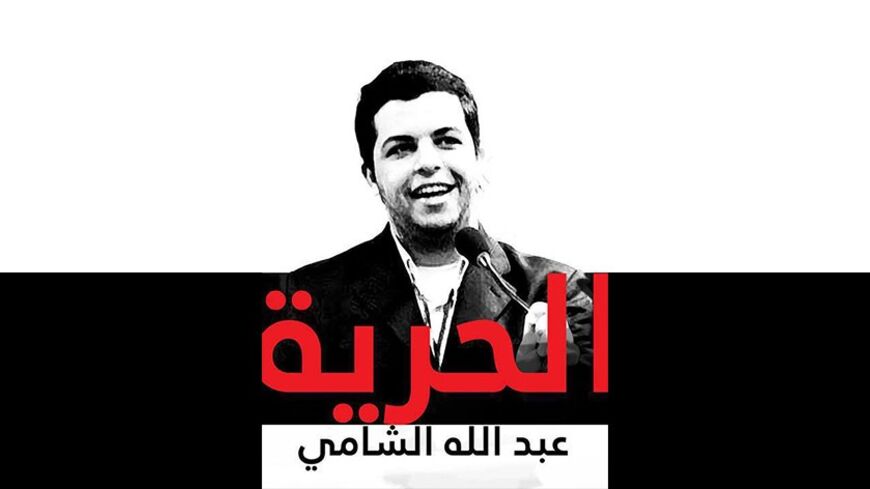 Abdullah Elshamy, an Egyptian journalist, has been in prison since Aug. 14, 2013. - Facebook/Mosaaberizing
Shadi Rahimi
@shadirahimi
March 21, 2014

CAIRO — It has been 60 days since Abdullah Elshamy last ate. The journalist has been in prison since Aug. 14 of last year, when security forces arrested thousands and killed as many as 1,000 people during the dispersal of a sit-in in support of ousted President Mohammed Morsi.

Abdullah will turn 26 in May. He was arrested at a checkpoint after police saw his visa with Al Jazeera identification, said his brother, photojournalist Mohammed Elshamy. He was accused of “inciting violence, spreading sectarian violence and killing police officers,” his brother told Al-Monitor.

Seven months into his detention, Abdullah has yet to receive a trial date. He began a hunger strike in protest in January. When his brother last saw him, a month later, he appeared to have lost 30 pounds. Mohammed said he has urged him to end the hunger strike for health reasons, but Abdullah is persisting, “until he has a trial or is released.”

“It is a battle whose victories I reap every day, as I confront every obstacle to the moment when the breeze will breathe upon my face under an unobstructed sky,” Abdullah wrote in a letter last week to his mentor and colleague, reporter Tayseer Allouni of Al Jazeera.

In his first public vow related to imprisoned journalists, President Adly Mansour pledged this week to the parents of Australian journalist Peter Greste of Al Jazeera that he will "spare no effort" to secure their son's release. Local journalists were quick to point out the president is singling out the foreign journalist while Egyptian journalists remain without recourse.

“What about others?” tweeted Daily News Egypt reporter Basil El-Dabh.

Greste, Canadian-Egyptian journalist Mohamed Fahmy and Egyptian producer Baher Mohamed were arrested almost three months ago on charges of broadcasting false news and assisting a “terrorist” organization, in reference to the blacklisted Muslim Brotherhood. Their high-profile case has received condemnation from the White House and United Nations officials.

Meanwhile, calls for the release of Abdullah and other Egyptian journalists, including Fahmy, Mohamed and Rassd News Network reporters Abdallah Fakharany and Mohammed Sultan, remain unheeded by officials.

The problem is endemic of the highly divisive landscape of Egypt’s media, Mohammed said. Since the arrest of his brother and his colleague, cameraman Mohammed Badr, among the first journalists netted in crackdowns following Morsi’s ouster, there has been little support from most Egyptian media, he said.

In the days after Morsi’s ouster, allegations of pro-Muslim Brotherhood bias by Al Jazeera’s Egyptian outlet, Al Jazeera Mubasher Misr, led to large-scale resignations of its staff, and condemnation for those associated with the channel. At an army news conference last fall, some Egyptian journalists chanted for Al Jazeera staff to “get out,” prompting its Cairo bureau chief to leave.

Meanwhile, many Egyptian television stations fueled pro-military nationalism and stoked fears of foreigners as spies and journalists as undermining national security. Today, the accusation of “Al Jazeera” can lead to attack, and working as a journalist can lead to arrest.

In a video from this year’s revolution anniversary, a police officer threatens a TV correspondent to stop filming police or he will announce they are with Al Jazeera. Journalist Nadine Marroushi wrote of being attacked in Tahrir Square when accused of reporting for Al Jazeera. “An angry crowd quickly formed around us. 'You traitor, you pig,' a veiled woman shouted at me. She pulled my hair and grabbed at my scarf, choking me,” she wrote.

Now, at least one prominent Egyptian journalist who has spoken out against media crackdowns is facing backlash. Journalists Syndicate Deputy Abeer al-Saadi wrote on her Facebook page last month that she was suspending her participation in response to the syndicate’s failure to take sufficient action against crackdowns on journalists.

The Al Ganoby news site reported that Saadi is facing an internal investigation. Saadi declined to speak to Al-Monitor this week for fear of repercussions.

The syndicate often issues strongly worded but mostly toothless statements. A journalist told Al-Monitor that its head, Diaa Rashwan, was instrumental in pushing officials to improve prison conditions for Greste, Fahmy and Mohamed. But Saadi said in her statement that the syndicate’s role was reactionary, and her decision was meant to signal the “catastrophic ramifications of silence in response to this attack on the safety, security and dignity of journalists.”

Egypt was ranked the third-most dangerous country for journalists last year by the Committee to Protect Journalists. Six journalists were killed in Egypt for their work last year, three of whom were killed Aug. 14 during the dispersal of pro-Morsi sit-ins, the watchdog group said.

Three of the brothers in Mohammed’s family are journalists, who have each been arrested a few times. “It’s not easy,” he said. “It’s the media’s fault, they have been spreading propaganda, and now in the streets people yell at us, 'You’re the ones who ruined the country.'”

On a working trip to South Sudan, Mohammed was embedded with soldiers and rebels amid bloody ethnic violence. He was questioned by people, he said, but never attacked or arrested. In Egypt, he recalls, Brotherhood supporters broke his camera's lens at a protest.

On his 170th day in prison, Abdullah wrote, “It's unfortunate for aspiring young reporters to work in such atmosphere that forces you to choose: you are either with us or you are against us.”

This week, his brothers Mohammed and Mosa’ab launched a Facebook event page to collect letters for their brother, which they plan to print for him to read in prison.

The president’s pledge this week to help Greste may be a promising sign, Mohammed said, because of the outcry likely to follow the release of a foreign journalist if his Egyptian counterparts remain in prison. Their trial is to resume on March 24.

Mohammed continues to hope for his brother’s release, or at the very least, a trial date.

“At least with a trial you know what’s coming,” he said. “Without that, you’re losing time in your life for nothing.”