In an exclusive interview with Al-Monitor, Dutch reporter Rena Netjes describes the plight of journalists in Egypt and why she had to leave. 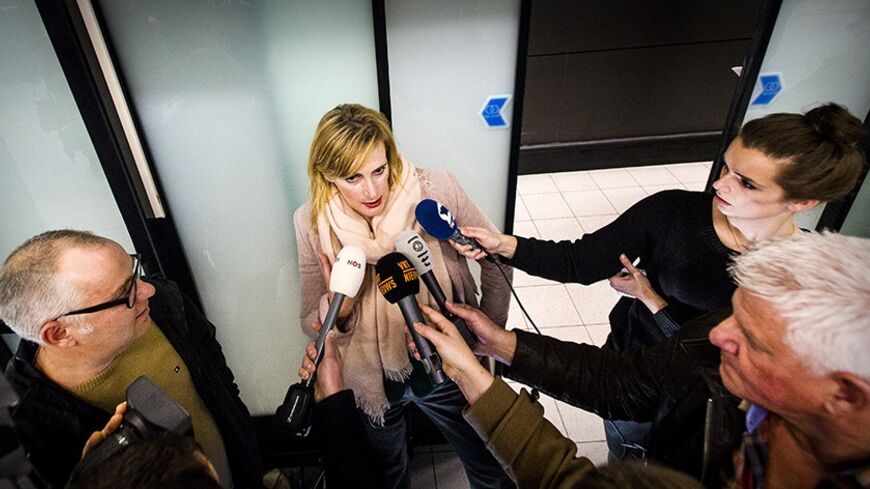 Dutch journalist Rena Netjes arrives at Schiphol airport after being accused by Egypt of being part of a terror cell, Feb. 4, 2014. - REMKO DE WAAL/AFP/Getty Images

AMSTERDAM — Dutch journalist Rena Netjes has fled Egypt after it emerged she was one of 20 journalists accused last week of “fabricating news” and being party to an alleged terrorist plot.

“If the Egyptian authorities had arrested me, I don’t know what I would have done. Conditions in Egyptian prison cells are horrible. As a woman, you are also afraid of getting raped, especially if you are labeled as a terrorist," Netjes told Al-Monitor Feb. 5, one day after her arrival in the Netherlands.

Netjes, who is accused of spreading false news while allegedly working for Al Jazeera media network in Egypt, is relieved to have left the country. She said, “Thank god for the Dutch Embassy in Cairo. They saved my life."

When the prosecutors’ list was made public and contained "Johanna Indenietta" (the journalist's full name is Johanna Henrietta Netjes), the Dutch Embassy called her. Netjes discovered she was indeed on the list of those accused of belonging to what the authorities are calling Al Jazeera’s “Marriott cell,” named after the hotel that foreign Al Jazeera correspondents have used as a base since Egyptian authorities closed down their offices.

“They put me on the terrorist list because I visited journalist Mohamed Fahmy Dec. 14 in his office in the Marriott. According to my lawyer, there are more people on the list who only visited him once. It’s ridiculous," Netjes explained.

Al Jazeera journalists Peter Greste, Mohamed Fahmy and Baher Mohamed have been detained in Egypt since Dec. 29, accused of “leading a terroristic cell” and “fabricating news.” Al Jazeera denies the allegations against its journalists and has condemned their continuing detention.

Egyptian Foreign Minister Nabil Fahmy said Feb. 4 in The Hague that the charged journalists will get a fair process.

“I’m not calling anybody a terrorist; that’s up to the Egyptian court. They will decide who is guilty and who is innocent," he told Dutch media, adding that Western journalists in Egypt can do their work safely.

The Egyptian Foreign Minister met Dutch Foreign Minister Frans Timmermans for a work lunch. They talked about Egypt’s democratic transition process, developments in the region and, of course, Netjes’ case.

Netjes, who works as a correspondent for the Dutch Parool newspaper and BNR Radio, never worked for Al Jazeera.

"I talked with Fahmy because I wanted more background information on his Sinai reporting, for my own background knowledge, because he is specialized in that subject," she added.

On Feb. 2, a video of the arrest of Greste and Fahmy was broadcast on the Egyptian network Al Tahrir. The 20-minute video of images of the crews’ laptops, film material and mobile phones was edited with ominous music appropriate for Hollywood thriller.

Al Jazeera said that the leak and dramatization of the footage are an attempt to demonize the journalists in the latest incident of incitement against the network.

According to Netjes, Marriott employees copied her passport when she visited the Al Jazeera journalist and connected this document with the “evidence” found in Fahmy’s room a few weeks later.

“When I found out I was charged, I went to the embassy immediately, but it took me an hour to get there. 'What if they arrest me now?' I kept thinking. I was frightened, even when I walked from the car to the door,” Netjes told Al-Monitor.

The Dutch journalist, who has been traveling to Egypt for over 25 years and has lived in Cairo since 2010, spent several days in hiding. Following intervention from Dutch officials, she received permission from Egyptian officials to leave Egypt on Feb. 3. She left all her belongings behind, save for a single bag.

Netjes hopes that she can return to the country where she studied and lived for many years, but wants the Egyptian prosecutor to drop the charges first.

“The prosecutor told us that the case was weak, because my name was misspelled and my passport number was not right, but that it was up to the judge to decide. It probably will take a long time, but I will do whatever it takes to clear my name.”

As the climate for journalists in Egypt becomes more hostile and state media channels blame the West for falsifying reports and conspiring against them, media workers in Cairo fear for their own safety.

“I want to get out of here,” Times correspondent Bel Trew tweeted Feb. 4 after she found out Netjes had fled to Holland. Reporter Sheera Frenkel tweeted the same day that "Conversations with friends in Egypt focus mostly on who is leaving, who is in hiding and who has been arrested."

“Everyone who shows signs of criticism can get arrested. This happened under [former Presidents Hosni] Mubarak and [Mohammed] Morsi’s policy, but under [Gen. Abdel Fattah al-]Sisi’s leadership, it’s getting worse," Netjes said.

Netjes also wrote critical articles about Morsi’s policies and in April 2013, she was arrested while interviewing young Egyptians in a bar. After spending one night in jail, Netjes was released the next day.

Another reporter from Cairo who wishes to remain anonymous admits that there is a lot of fear among journalists, especially foreigners.

“Egyptians scream ‘You are from Al Jazeera!’ when they see a foreigner with a camera. Before you know it, dozens of angry Egyptians come running after you,” the reporter told Al-Monitor.

The Committee to Protect Journalists said the level of attacks on and detentions of journalists in the months after Morsi’s overthrow was unprecedented in Egypt’s history. According to the committee, Egypt is now one the top three most dangerous countries for journalists.

However, the crackdown on journalists has itself resulted in a protest movement. Editors and journalists all over the world, including CNN, the BBC and The Washington Post, have signed a petition demanding the release of all journalists currently detained in Egypt. And this week, a campaign called Free Al Jazeera Staff started on social media, asking people to support the release of the detained journalists by showing pictures of themselves holding signs reading "#FreeAJStaff."

“Whether you agree with Al Jazeera’s coverage or not, detaining reporters is unacceptable. Sad that Egyptian journos are silent," Egyptian-American journalist Reem Abdellatif tweeted Feb.4, adding, “Journalists are not terrorists.”