The sham sentences handed out to Al Jazeera journalists have done more damage to Egypt’s reputation than any propaganda cell could have. 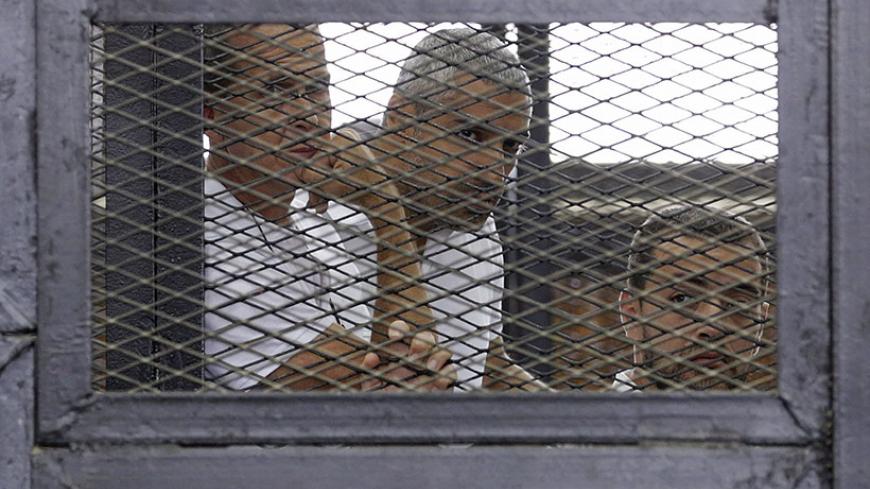 Long before his name became synonymous with journalists being tried by kangaroo courts of oppressive regimes thanks to the Al Jazeera trial, I knew Mohamed Fadel Fahmy as one of Egypt’s best journalists and one of my good friends. We met back in 2007 when he was working for the Red Cross in Lebanon and Iraq, and, according to him, it was my tweets about the oncoming January 25 Revolution that got him to jump on a plane and come to Egypt in 2011, and he has stayed ever since.

Now he is in jail, facing a seven-year sentence alongside Peter Greste, Baher Mohammed and other defendants in what is referred to in Egypt as the “Marriot Cell trial.” Moody, as his friends would call him, is imprisoned on charges of being the ringleader of a Muslim Brotherhood cell that aims to tarnish Egypt’s image and reputation. But everyone knows that he is really in jail for working for Al Jazeera English right around the time the Egyptian regime wanted to settle scores with Qatar.

A liberal secularist who drinks alcohol is charged with being a member of a conservative Islamist organization and the ringleader of its cell for international propaganda, despite working for Al Jazeera for only about three months before getting arrested.

That last bit of info is one that is underreported in international media, and never gets mentioned in the local media at all, but that’s not an anomaly if you compare it with the other defendants in the case. Very few here know that Peter Greste arrived in Cairo for the first time 17 days before his arrest; or that Baher, a freelancer who faces 10 years in prison, was not arrested at the Marriott, but his home on Dec. 29, when anti-terror squads shot down his door and, subsequently, his dog; or Rena Netjes, a Dutch reporter who also received 10 years in absentia, wasn’t even working for Al Jazeera, and was only meeting Fahmy for an interview on the Sinai Peninsula. Only thanks to the ineptitude of state security — which got her name and passport number wrong — was she able to flee the country.

The case also includes students whose only crime was sending in videos and foreign journalists who had left Egypt a long time ago, such as Dominic Laurence John and Susan Melanie, and a cameraman, Mohamed Fawzy, who after being jailed for two days, was mysteriously released and allowed to leave the country, despite still being sentenced to 10 years in absentia by the court. According to investigation papers I obtained, the case also targeted Al Jazeera Mubasher Egypt and its employees, but that somehow never mattered to either the police, prosecution or the courts, which handed out the heavy sentencing in June with no qualms.

The verdict’s jurisprudence read like a satire of a verdict that a fictional, draconian kangaroo court would issue. The court accused Fahmy and his co-defendants of having “exploited the noble journalism profession for aims other than its objectives, and transformed it from the profession of search for the truth to the profession of falsification of the truth, and Satan joined them in the exploitation of this media activity to direct it against this Country.” Yes, Satan, himself was involved, but to what end? Well, serving the goals of the Muslim Brotherhood and “portraying the Country — untruthfully — to be in a state of chaos and confusion, to give the impression that it is a failed state suffering division, internal strife and disarray.” The evidence backing those charges up has been widely reported, and it includes videos of trotting horses, programs on sheep farming and reports that have nothing to do with Egypt at all.

The bizarre and irrelevant evidence had no bearing on the continuation of the trial, and neither did any of these facts:

Other points of contention ignored in the case included the lack of actual proof that Mohamed, Baher or Peter are members of the Muslim Brotherhood, or how they funded the Brotherhood and gave it info and equipment, which they are charged with. There’s also a lack of evidence on how they obstructed the constitution, which they are also charged with. The history of the judge, Mohamed Nagy Shehata, also leaves much to the imagination, such as being implicated in forging the 2005 elections in Egypt, and being the judge handpicked for many of the Brotherhood cases where he issued death sentences as if they were flies. None of this mattered to anyone, and the damage that it did to Egypt’s reputation was more effective than 100 propaganda cells.

It is safe to say that Fahmy and the other defendants are facing a political trial, one where law and evidence doesn’t matter, which has prompted him to take a different strategy in dealing with the charges. From the start, Fahmy chose not to use Al Jazeera’s legal team, and has just hired a new lawyer to carry out his appeals. He also donated to Abdel Fattah al-Sisi’s Long Live Egypt fund, and rejected US rhetoric for their release, while announcing his intention to marry his fiancee despite being in prison.

The ridiculousness of the trial has also prompted a local campaign to release him, started by film star Khaled Abu el-Naga and film producer Mohamed Hefzy, despite the state of political fear paralyzing the country, and the stigma that the name “Al Jazeera” still has in Egypt. Incredibly, Fahmy’s defense currently has testimony by Amr Moussa, who is a bulwark of the current regime, Naguib Sawiris — who is no fan of either Al Jazeera or the Muslim Brotherhood — and Farouk Elbaz, attesting that he is not a member of the Brotherhood and demanding his release.

It’s important to note that given his status of “ringleader” of the “Marriot cell,” if he is cleared of the charges, the entire case should technically legally crumble. Nevertheless, law and evidence have little to do with this case, so it remains to be seen if any of this will be effective in overturning the sentences or releasing Fahmy and his co-defendants. Law has died in Egypt with this trial; it remains to be seen if political pressure and logic died alongside it as well.