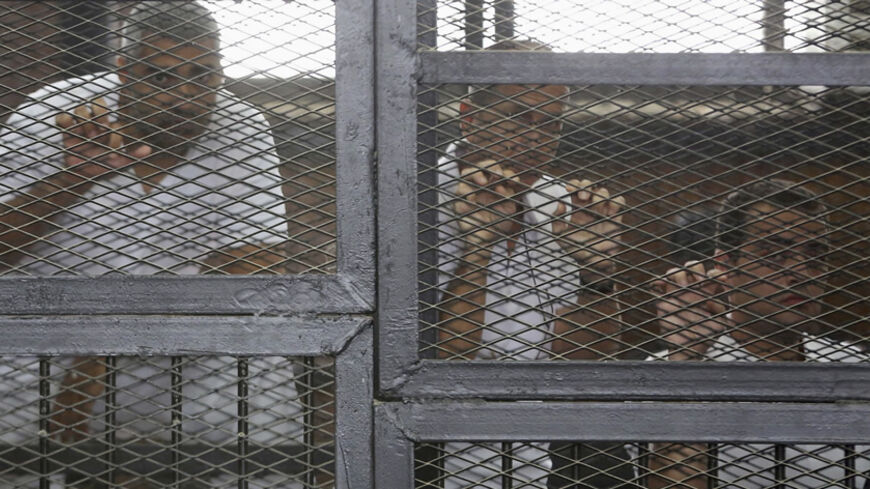 Last week, Wael Metwally, my new business partner, texted at 11 a.m., saying, “Apparently I have been sentenced to 15 years in absentia despite being in attendance in court,” before being promptly arrested in the court room for violating his “in absentia” verdict and thrown in prison, alongside Alaa Abd El Fattah and Nubi, fellow suspects of violating the “protest law” in what is known as the “Shura Council” case. It is worth noting that Metwally was not protesting that day and was simply a bystander at a respectable distance, and yet he was arrested and is now sentenced to 15 years in prison. It is also worth noting that the sentencing happened before the defense even started to present its witnesses, which was supposed to happen the day of the verdict. The judge simply started early and prevented the lawyers and suspects from entering the room. He then stated that given their absence, the trial is over, and he issued a sentence. Metwally was the only one who managed to get inside the court room, and when he pointed out his presence, the judge was startled, gathered his papers and ran off. Metwally was immediately detained.

The shenanigans in this case are nothing compared to the Al Jazeera trial. Burea chief Mohamed Fahmy, producer Baher Mohamed and ex-BBC reporter Peter Greste have been dealing with months of imprisonment in a case so poorly fabricated that it should have been thrown out of court months ago. They are accused of being a secret Muslim Brotherhood cell and supporting “terrorist” activities with their reporting. Evidence against them so far included an animal documentary, hard drives filled with pictures of Greste’s parents and unintelligible audio recordings. Besides refusing to release them on bail despite the lack of evidence, the judge in this case has also decreed that for the defense to access and view the “evidence” of the prosecution, they should pay the prosecution $180,000.

Then there is satirist Bassem Youssef, host of the highest rated and most viewed show in Egypt and the Middle East, who finally announced the end of his show "El Bernameg" (The Program) on June 2, after an almost two-month hiatus that included the presidential elections. His hiatus was preceded by months of character assassinations, changing channels, lawsuits, signal interference whenever his show was broadcast and insane pressure on MBC Masr (his new host channel), which included Prime Minister Ibrahim Mehleb personally revoking a cooperation deal between MBC Masr and Egyptian national television for no reason. Youssef was slated to return after the elections were over to give his comments, but instead his proposed script was rejected. He then announced the end of his show at a press conference. Despite having one of the most recognized brand names in the industry, and a loyal audience of approximately 30 million viewers, not a single private TV channel wanted to pick up his show. The era of intelligent political dissent and satire on TV seems to be over.

It is easy to paint a picture of a planned organized campaign to repress freedom of speech and press, but is this systematic? It may seem so at first glance, but upon closer look, one discovers that the situation is far pettier than that.

What unites these three very different men — Metwally, Fahmy and Youssef — is that they are victims of a state whose different institutions are exercising personal pettiness that is shared by a significant segment of the population. Metwally is sentenced to 15 years because of a personal dispute between the judge and Fattah, with the judge knowing that the ruling will not face wide public outrage due to the hatred that Fattah enjoys among the current regime-backing public. (It is worth noting that other defendents in this case, upon hearing the ruling, turned themselves in and were told to go home, since they only wanted to imprison Fattah — with Metwally and Nubi simply unlucky for being in court as well.)

Fahmy and Greste are facing a kangaroo court and possible sentencing simply because the police and population hate Al Jazeera and its state-backer Qatar, and this is a way to “punish both” and show “them our strength.” As for Youssef, he has to be shut up because of the insecurity of Abdel Fattah al-Sisi’s backers (Egyptian owners of private TV stations and — in the case of MBC — the Saudi government itself) about the new regime’s survival and success, which they believe is now permanently linked to Sisi’s image. Apparently, anything less than outright praise is unacceptable at this stage.

The scary part of all this is not that the police state is active and is operating efficiently and according to a plan, but that the situation is random and manic, based on personal feelings and likes, and appeals to the angry, insecure and frightened mob to showcase that the state is strong. Take the case of Seoudi supermarkets, a famous supermarket chain in Egypt whose different branches are owned by different members of the Seoudi family. The owner of one supermarket was known for his Muslim Brotherhood leanings, while the rest are all outright Sisi supporters. Because of this one family member, the entire chain was deemed by the public as a Muslim Brotherhood front, and the police — who should know better — seized ownership of all the supermarkets to show they are “stopping the financing of terrorism.” This public relations stunt sent waves of panic to the business community, with one question on everybody’s mind: If even Sisi supporters can be collectively punished for guilt by association, where does that leave those who believe that their best hope of survival is to stand aside and weather the storm? How can one weather pettiness?

Youssef is off the air, and no one knows when, if ever, he will be back on TV again. The Al Jazeera trial’s sentencing is set for this week. No one can predict what the verdict will be, but no one is optimistic. Metwally and Fattah are still awaiting news on when their retrial date is scheduled for, and should have found out at least a week ago. However, the judges refuse to set a date, and even if they do, the prison authority could decide not to take them to court for their trial, with their sentencing to take place in absentia again. All of this is illegal, but still happens because petty men rule this country, and even pettier people support this in the name of stability and (snicker) rule of law needed for the greater good of our country. In doing so, they are forgetting one simple truth: Petty men do not build great states. They only destroy them.