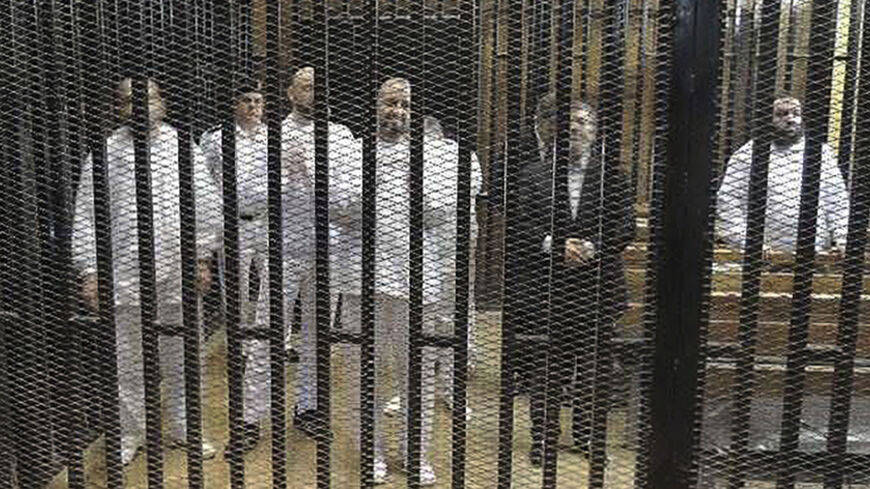 CAIRO — In a shocking verdict, both by Egyptian and international standards, Al-Minya Seventh District Judge Saeed Youssef sentenced 529 defendants to the death sentence, while freeing 17 others.

Those convicted will now have their sentences reviewed by the mufti, as is the law, in order for him to sign off on the executions or stay them. The defendants were accused of burning the Matay police station, killing a police officer and attempting to kill two others, seizing police weaponry and disrupting public order in the immediate aftermath of the dispersal of the Rab’aa sit-in in August 2013. Given that this is a first-level verdict and that most defendants were tried in absentia, the general understanding is that this verdict is anything but a done deal, while the final verdict is expected on April 28. Tomorrow, March 25, more than 600 defendants, including Muslim Brotherhood Supreme Guide Mohammed Badie, will stand trial on similar charges. Monday’s verdict is seen by many as a precursor to what's expected in the latter trial as well.

The reaction was massive.

There were local endorsements, including former parliamentarian Mohammed Abu Hamed, a liberal also known as an Islamic scholar, who proclaimed his staunch support for the “execution of the terrorists,” and said crimes of terrorism merited harsh sentences.

An Arabic Twitter hashtag [translating into] “I support the death sentence verdict on the terrorists” sprung up, featuring images of slain policemen and individuals, their grieving mothers and widows, accompanied by arguments that harsh measures are deserved and the only way to go to “save Egypt.” Others recount alleged violence in Minya that the defendants potentially participated in, while strongly attacking those who are criticizing the verdict. On the other hand, the reaction varied between shock and fury, if not mixtures of both. Some tweeted what appeared to be unflattering comparisons with North Korea.

Mohammed Tosson, a Brotherhood leader and defense team member, said the verdict was the “fastest and most bizarre in the history of [the] Egyptian judiciary,” while stating that only 22 defendants out of the lot were actually Brotherhood members. Amnesty International described the verdict as “grotesque” in a report that even Jordan’s Queen Noor had tweeted while adding that the entire affair was “horrifying” and “counterproductive” for Egypt. Amnesty also added, “This is the largest single batch of simultaneous death sentences we’ve seen in recent years, not just in Egypt but anywhere in the world.” Buzzfeed’s Sheera Frenkel quoted lawyer Negad Borai saying the decision was a manifestation of “the collapse, even in the most technical ways, of executing justice.” Frenkel even reported that one of the defendants is in a wheelchair, with the lower half of his body paralyzed, rendering him practically unable to partake in the alleged violence in the first place.

The defense has reportedly not even been granted time to present its case, and its earlier request to change the judge had been denied. According to Egyptian daily to Al-Masry Al-Youm, the judge has had a history of controversial verdicts. In one case, he reportedly sentenced a man to 30 years in prison for stealing women’s clothing from a shop. In another, he sentenced someone to 15 years in a maximum security prison for sexual harassment. He also freed all 11 defendants accused of killing protesters in Beni Sueif during the January 25 Revolution.

To put this into perspective, an Ahram Online report has some figures. Between 1981 and 2000, some 709 people were sentenced in civilian courts to execution, with only 249 actually executed. In 2010, 136 were sentenced in total, though no clear figures exist on how many actually were executed. In 2011, 115 death sentences were handed out, with at least one of them actually carried out. In 2012, 91 were sentenced to death; again it is unclear how many actually had their sentences implemented. There are still no official numbers on total death sentences in 2013, but one memorable verdict was in March when the Port Said criminal court sentenced 21 to death in the Stadium Massacre trial. The verdict was then appealed, a retrial put into motion.

This is certainly not the first time the Egyptian judiciary has been at the center of controversy. In the aftermath of the 2011 revolution, the judiciary freed almost all those accused of killing protesters during the revolution. And while there have been some exceptions, the judiciary has generally adopted a very tough direction in line with the government crackdown against the Muslim Brotherhood and its supporters. In November of last year, in a memorable decision, an Alexandria court sentenced 21 girls aged 15 to 22 to 11 years in prison for protesting. After local and international outrage, the sentences were then quickly appealed and lowered to one year with the sentence suspended, which was both welcomed and alternatively also seen as a further sign of the politicization of the judiciary.

The latest verdict raises a host of questions:

• Was such an extreme verdict, even if it was primarily a first-degree verdict for defendants in absentia, directly encouraged by the current authorities in Egypt?

• Or was the judge acting largely out of his own volition, especially given growing pressures by a sizable portion of the public and media demanding “faster and firmer” action by the judiciary?

• Also, if this verdict was indeed intentionally “demanded” by the authorities, what message is it trying to send?

• If it were trying to send an extreme warning message to the Muslim Brotherhood, wouldn’t there have been a more surgically precise way of doing that without such a terrifying verdict, one which was guaranteed to create massive local and international uproar?

• Or have the authorities in Egypt truly just stopped caring about global public opinion and the international community?

There are two views regarding the centralization of Egypt’s current crackdown. The first assumes a more traditional top-down crackdown, in which a central authority exercises direct influence in overall direction and on the most important details with regard to the supporting actions by the judiciary, the media, the police and government. The second, which some such as Michael Hanna and Nathan Brown apparently lean toward, suggests a more decentralized autocracy, providing an overall sense of direction encouraging the crackdown, but many of the actions were taken by the individual actors themselves, for better or for worse, often in line with their own more immediate agendas.

Looking at Egypt right now, this second option often appears to make more sense. Much of the judiciary certainly has no love lost for the Brotherhood since the days of Mubarak, which had had repeated criticisms of it, had several confrontations over the position of prosecutor-general as well as the intention of axing more than 3,500 judges during Morsi’s year in power.

Centralized or decentralized, whoever is in charge in Egypt needs to rethink where the country is headed and how the world perceives Cairo now.

If anything, the current direction appears to be leading the country toward an even more dangerous polarization, one which will radicalize more and more Islamist youth with expected troubling circumstances, and will certainly add profound damage to the increasingly withering claim that the current powers in Egypt ousted the Brotherhood to establish a progressive, liberal democracy and save Egypt from the Brotherhood’s authoritarianism.