Who calls the shots in Egypt?

The 529 death sentences are yet another embarrassment to the Egyptian government. 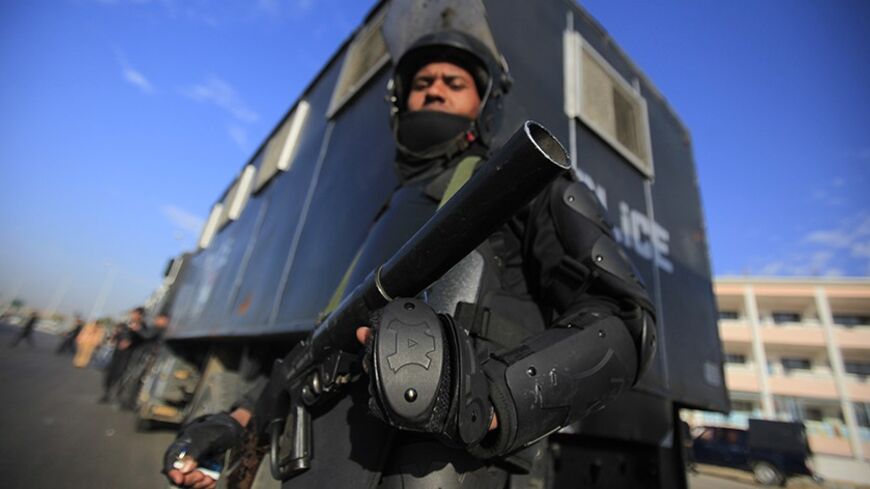 The incredible verdict sentencing 529 to death raises many questions about who is running the show in Egypt. Some analysts think that it is all connected — that there's one man who must review and approve all important decisions. Most of those subscribing to this camp further believe that this ultimate decision-maker must be Field Marshal Abdel Fatah al-Sisi. Others think this to be improbable and unrealistic — that it's impossible with the level of complexity the country is facing for any single person or even an institution to be able to handle the volume of important decisions, each of which represents a serious risk if mishandled.

It's hard to believe that one smart man who can manage all these intricacies would be making so many of such foolish errors, such as this verdict, which damage Egypt’s reputation, make Egyptians look like bloodthirsty savages eager to drink the blood of their fellow countrymen. Yet, it's also difficult to buy that there is no connection between the series of unfortunate events that form a disturbing trend of poor political judgment and total disregard for Egypt’s brand and its international image.

So, how are decisions made in Egypt?

For instance, did the three judges sitting on the judicial panel of this case, who are required to unanimously agree before a capital sentence can be dealt, decide to throw this verdict with their own conscience? According to Egyptian law, all verdicts carrying a death sentence are automatically appealed. Also, most of those sentenced in this case are on the run. By law, defendants indicted in absentia, if and when they finally appear before court, must be retried. So, as the Egyptian law makes it pretty difficult and lengthy to actually carry out the death sentence against anyone, it is possible that the judges wanted to wash their hands of the case knowing that it will be appealed and overturned.

But how did these judges reach their positions without realizing the legal gravity and damage their verdict will have on the country's reputation? Judges usually must be graduates of a law school. But which law school would neglect to teach its students that death sentence cannot be issued in bulk, wholesale style? Or that evidence must exist beyond reasonable doubt against each of those to be convicted and sentenced to lose their lives?

Or is there a third party, lurking in the shadows, utilizing the ambiguity and institutional fogginess of the transition to take revenge and possibly regain power that was temporarily lost following the January 25 Revolution?

A “war on terror” and the fear element that ensues, permeates public consciousness and causes a state of numbness, making many people unable to feel the gravity of the worst of atrocities, which then become justified in a context of “preventing collapse of the state” and aborting even more scary atrocities from taking place. This numbness renders regular norms and traditional values “idealistic” even “unrealistic” and unfit to be used at times of such exceptional circumstances.

Who could that third party be?

One candidate is the old State Security Investigation apparatus (SSI), which was dissolved shortly after the January 25 Revolution, then reborn later with what appears as a new mandate and “clean” staff, and named National Security Apparatus (NSA). A few months ago, the minister of interior announced that he was re-erecting the political arm of the SSI, the division which was formally tasked with “monitoring extremist political activities that could lead to terrorism.” During the 30 years of Mubarak rule, SSI gradually infiltrated every institution and ended up controlling virtually all political parties, syndicates, civil society organizations, universities, the media and government agencies. SSI power even stretched to influence private sector companies.

During Mubarak’s era, SSI staged elections, which constitutionally required strict judicial supervision till 2007, and planned their outcomes. SSI also influenced court verdicts in many cases. In short, it controlled the country. Many of the ousted officers of the old SSI came back under the excuse of utilizing their skills and past experience with Islamist militants in the war on terror. And while many who knew how demonically domineering SSI was met the minister of interior’s announcement with an uproar, the decision made perfect sense to a lot of people, who cited terrorist threats in the minister’s defense. But how could SSI officers, supposedly known for their political skills and ability to calculate response to various actions, seek such a verdict?

The sentence was bound to generate shock and sharp criticism from international players and human rights organizations. And it did just that. US State Department spokeswoman, Marie Harf, expressed shock while Catherine Ashton, EU foreign policy chief, voiced alarm. Harf said, “We don’t want to completely cut off the relationship,” which when compared with US Secretary of State John Kerry’s comments only a few days ago about how he hoped that the aid to Egypt could be resumed soon shows some level of deterioration.

But amazingly, many Egyptian folks defended the verdicts. In the street and on social media, many think that those sentenced are terrorists and must be punished to the full extent of the law. But how can any judge miraculously review evidence against and hear defense on behalf of 529 defendants so quickly? A difference must be demonstrated between the behavior of terrorists and a civilized society's response to it. If we act like terrorists, they win as they impose their values upon us and we all become murderous savages.

The verdict is clearly an embarrassment to the Egyptian interim government, especially when it is headed by a former Supreme Constitutional Court judge — in fact, chief. I would very much doubt that the verdict meets his standards for fair trial or that of Sisi for wining public opinion. But then that leaves us with the very first question: Who is calling the shots in Egypt? Decentralization is usually a good thing, because it often means chipping away power concentration. Independence of the judiciary is also a great thing, usually. But it means that judges should be independent from the influence of the executive power and other influencers. But surely judges cannot rule independently from the law, or be unbound by principles of fairness and the rules of logic.

And as we are unable to figure out who is calling the shots in Egypt, does this mean that Egypt indeed needs a strong man to give a clear vision and direction to the government and sort out this mess? Or is this a conclusion we are supposed to reach right before the presidential elections so that we warmly welcome some sort of a savior?

The verdicts will surely be appealed and most likely overturned, but all it leaves Egypt with for now is a new world record, in the hall of ridicule. In her media briefing, Harf said she does not know if Egyptian authorities are serious with this verdict. And this is what this verdict leaves us with, a feeling that we live in a surreal movie — one where things do not have to make sense or be taken seriously. Right till the end of the movie.