The trials of both former Egyptian President Hosni Mubarak and the deposed Muslim Brotherhood leaders reveal the flaws in Egypt’s court system. 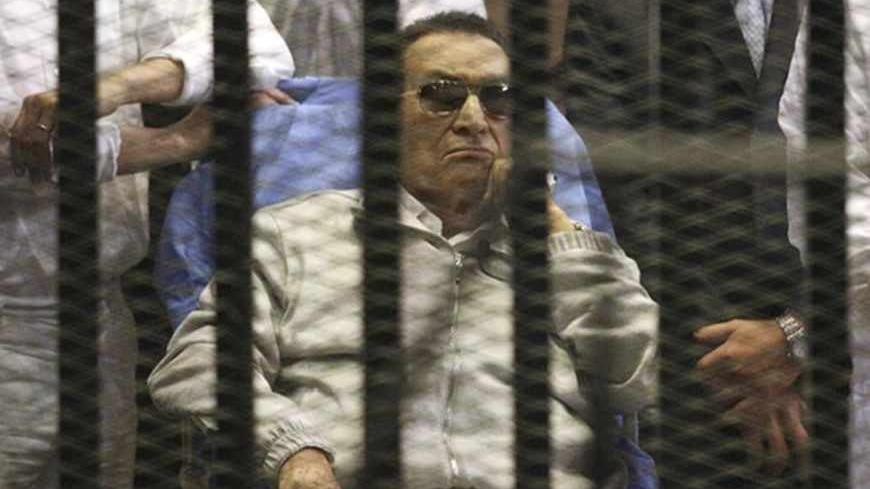 Egypt's ousted President Hosni Mubarak sits inside a dock at the police academy, on the outskirts of Cairo, April 15, 2013. - REUTERS

After being released from pretrial detention on Aug. 22 and transferred to a military hospital, ousted Egyptian President Hosni Mubarak returned to court on Aug. 25 to continue his ongoing trial for the killing of more than 800 protesters during the Jan. 25 Revolution, which deposed him. The case, which has been delayed again until Sept. 14, remains unresolved after judges granted an appeal from Mubarak’s representation against the June 2012 decision sentencing Mubarak and his former interior minister, Habib al-Adly, to life sentences.

In a particularly despondent few weeks for any hope of justice against the prerevolution state, Mubarak was also acquitted of corruption charges last week.

Sahar Aziz, a professor at Texas A&M University School of Law and president of the Egyptian-American Rule of Law Association, said in an interview with Al-Monitor that many lawyers were not surprised by the acquittal. Aziz said the problem is rooted in both law and politics. An underlying structural problem of the legal system is that the prosecutor general’s office is both responsible for prosecuting as well as gathering evidence. Common in alternative legal systems, the tasks are divided as the government investigative agency is responsible for evidence gathering, whereas the public prosecutor is charged with arguing the case.

The prosecutor general responsible for the Mubarak case was Abdel Meguid Mahmoud, a leftover from the Mubarak regime notorious for corruption and doing the regime’s political “dirty work.”

For Mina Khalil, assistant law professor at the American University of Cairo, Mubarak’s acquittal is another sign of the failure of the rule of law in Egypt, not only because of evidentiary problems with the case but “because the charges that were brought against Mubarak were insufficient.”

The legal and political obstacles to proving a case against Mubarak are why many Jan. 25 revolutionaries demanded a revolutionary trial early on. Convicting Mubarak in a civilian court may just not be possible.

Khalil explained in an interview with Al-Monitor that the type of case brought against Mubarak for the killing of protesters is considered a “crime of omission, which are generally harder to prove because you have to show that he had a legal duty to do something that he didn’t do.”

The weightiest case brought against Mubarak — the deaths of protesters during the revolution — was only from the 18 days of the revolution. Apart from the corruption cases, he has yet to be charged with any other crimes during his three decades in power. The Egyptian Organization for Human Rights sent a communique to the prosecutor-general on Aug. 22, after his acquittal in the corruption case, demanding Mubarak’s investigation for “cases of torture, mistreatment and abuses to life.”

As Mubarak’s retrial for the protesters’ deaths continues to drag out, many Egyptians have lost faith in ever seeing Mubarak brought to justice. Mahmoud Hamad, assistant professor at Drake University in Des Moines, Iowa, predicted in an interview with Al-Monitor that the case will never be resolved nor will Mubarak ever be held accountable.

Anything leading to a guilty verdict for Mubarak will also implicate many of the top leaders of the old political and military establishment, as many of them are not only complicit in Mubarak’s violations but also guilty of their own crimes. Speaking with Al-Monitor, Aziz pointed out that Mubarak has threatened to air everyone’s dirty laundry from the old regime. For many decision-makers over the last 2 1/2 years that has been sufficient deterrent from diligently pursuing the case.

After Mubarak’s release from pretrial detention, interim Prime Minister Hazem el-Biblawi ordered him under house arrest as a measure to placate the public. However, Biblawi only has the authority to do this under emergency law, and once it ends, Mubarak is free to move around the country.

Although there is a travel ban for Mubarak to prevent him from leaving the country, were he to do so, the royal families of Saudi Arabia and the United Arab Emirates will welcome him with open arms, said Hamad.

Aziz argued that if the interim government was keen to keep Mubarak in jail, under emergency law they have “carte blanche to arrest and detain, so they could have arrested him and put him in jail.” That they did not do this indicates the slim possibility of Mubarak ever returning to prison.

Aug. 25 also marked the start of the trial of Mohammed Badie, the spiritual guide of Egypt’s Muslim Brotherhood, and deputies Khairat al-Shater and Rashad Bayoumy, all of whom were absent for security reasons according to officials. However, the trial was adjourned until Oct. 29, so that they can be present.

Foreign pressure against the prosecution of the Muslim Brotherhood’s leaders and leveraging their imprisonment as a negotiation tactic may mean that the trials will never happen. However, Aziz said the more aggressive the trials against the Muslim Brotherhood’s leaders and how far back the accusations go will reflect the insecurity of the military regime.

“I think they’re using the criminal justice system to keep the Brotherhood out of the electoral process,” Aziz added, because the Brotherhood might not win the presidency or gain a majority in the next round of elections, but they will likely still get a strong turnout.

“The only political opposition is the Brotherhood and the military regime is trying to eliminate them or set them as far back as possible so it will take them decades to recover. In the meantime, the combination of the military and the security apparatus can fully entrench itself.”

Zenobia Azeem is a freelance writer focusing on Egypt. She has worked in international election observation for the past five years, primarily in the Middle East. On Twitter: @elbowsymmetry