Prisoner Mohammed Sultan renounced his Egyptian nationality to escape a jail sentence, which stirred many questions about the law on the extradition of prisoners. 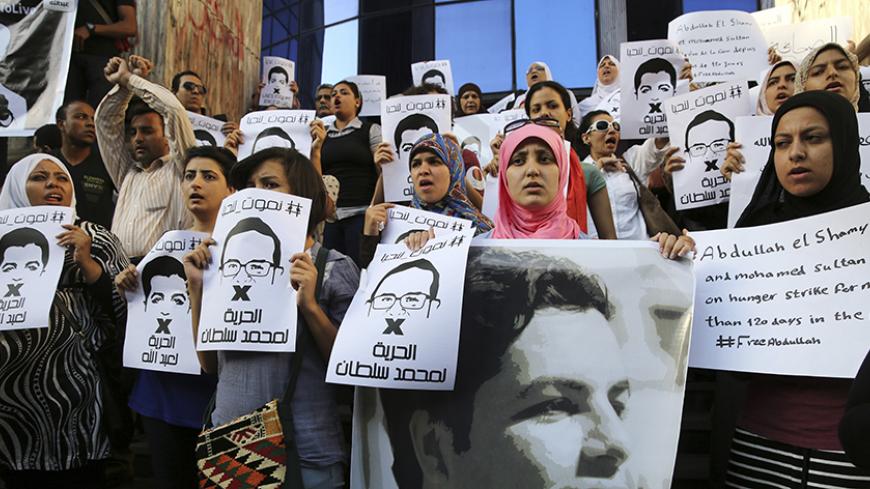 Protesters rally in support of Al Jazeera journalist Abdullah al-Shami and of Mohammed Sultan, who have been detained by Egyptian authorities, in front of the Press Syndicate in Cairo, June 1, 2014.

CAIRO — A sharp controversy raged on Egypt's social media after Mohammed Sultan, jailed nearly two years ago in the “Rabia Operations’ Room” affair, revealed his waiver of Egyptian nationality to escape a jail sentence in Egypt and be deported to the United States on May 30. He had been imprisoned since Aug. 25, 2013.

Sultan made this decision within the scope of Egyptian Law No. 140 of 2014 allowing the extradition of convicts holding another nationality or a dual nationality from Egyptian territories to their respective countries if they revoke their Egyptian nationality.

Several politicians seized the opportunity to comment on the case. The former minister of legal and parliamentary affairs, Mohamed Mahsoub, an Islamist, said the release of Sultan is a victory over the country's gangs of corruption and oppression. But the founder of the Tamarod movement, Mahmoud Badr, said, “Some people sacrifice their country to eat fast food,” and sarcastically ordered a big meal for Sultan.

The promulgation of Law No. 140 of 2014 by President Abdel Fattah al-Sisi in November 2014 was linked with the well-known “Marriott Cell” affair in Egypt. Al Jazeera English-language journalists were arrested on Dec. 29, 2013, on counts of assisting the terrorist Muslim Brotherhood organization. These journalists include Australian national Peter Greste (deported in February) and Egyptian-Canadian Mohammed Fahmi, who has given up his Egyptian citizenship in an attempt to be released.

The affair caused deep embarrassment to the Egyptian regime since it stirred the wrath of several Western countries, including Britain and the Netherlands, as well as Australia and Canada, in terms of the jail sentences given to the Al Jazeera journalists. On June 23, 2014, both journalists were sentenced to seven years in a maximum-security prison.

This same law was invoked for the release of Sultan, who also holds US citizenship; his father’s family has lived in the United States since 1990. He is the son of former secretary-general of the Supreme Council for Islamic Affairs and prominent Muslim Brotherhood leader Salah Sultan, who teaches at various Islamic institutes across the United States, such as in Michigan, Missouri and Ohio. The Sultan case sparked worldwide sympathy, especially following Sultan’s hunger strike since Jan. 29, 2014. Photos of Sultan lying on a portable bed with his father by his side in front of a judge, after the deterioration of the detainee's health condition, stirred internal sympathy and external denunciation. The father has been sentenced to death in Egypt.

In 1995, Sultan moved to the United States. He graduated in 2012 from Ohio State University and holds a BA in economic sciences. In 2013, he served as the director of institutional development at the oil services company EPSCO-Egyptian Petroleum Services Co. In March 2013, he decided to leave the United States and come to Egypt to take care of his mother, who was diagnosed with cancer, and of his brother, suffering from a chronic skin disease. However, five months after his arrival in Egypt, on Aug. 25, 2013, he found himself in prison following his arrest by security forces. He was charged with running a media center at the Rabia al-Adawiya sit-in, spreading false information about Egypt and tarnishing its image abroad.

The US administration accorded great interest to the Sultan affair. During his meeting with Sisi on the sidelines of the UN General Assembly meeting on Sept. 25, 2014, US President Barack Obama requested Sultan’s release due to the deterioration of his health condition. Twelve human rights organizations, such as the Hisham Mubarak Law Center and the Land Center for Human Rights, also requested his release. The Giza Criminal Court held that Obama’s call for Sultan’s release was a blatant interference in the affairs of the Egyptian judiciary and strongly rejected to interference from any party, internal or external.

The Cairo Criminal Court, presided over by Judge Naji Shehata, issued on April 11 a ruling in the Rabia Operations Room case, sentencing 14 defendants to death by hanging and 37 defendants, including Sultan, to life imprisonment.

Lawyer and human rights activist Hafez Abu Saada, the director of the Egyptian Organization for Human Rights and member of the National Council for Human Rights (NCHR), told Al-Monitor, “Law No. 140 of 2014 is unconstitutional as it discriminates between citizens and violates the rule of equality.”

Abu Saada predicted that the ruling would be deemed unconstitutional by the Supreme Constitutional Court of Egypt in case any court action is filed by any citizen against the ruling before the Constitutional Court. He added, “This law undermines important legal principles, including that citizens are equal before the law. In a crime involving more than one perpetrator, why would the law give privilege to an Egyptian citizen just because he has dual citizenship and deport the latter to the other state, while the other partners in the same crime would be bound to serve the sentence in Egyptian prisons?”

Abu Saada added, “The law also violates the principle of Egyptian sovereignty over its territory. For example, the spiritual leader of Gamaa Islamiya, Sheikh Omar Abdel-Rahman, who was arrested in the US in 1993 on charges of conspiracy in the 1993 New York bombings, is serving a life sentence [in a US prison], even though he is denying the charges against him. The 77-year-old man — who lost his eyesight when he was only 10 months old — is still imprisoned in the US, which refuses to extradite him to Egypt, despite all attempts by ousted President Mohammed Morsi to hand him over to Egypt.”

George Isaac, the rapporteur of the NCHR Committee of Political and Civil Rights and the secretary-general of the Egypt of Freedom Party, told Al-Monitor, “It is sad that an Egyptian [citizen] revokes his Egyptian nationality, but it is the right of every person to choose what he wants. I refuse to accuse Sultan or others of treason. The Egyptian scene is recurrently invoking the terms ‘treason’ and ‘betrayal.’ Every person whose opinion is not in line with the mainstream opinion is considered a traitor or collaborator.”

Isaac said that this situation cannot produce a constructive dialogue that would bring together the Egyptian people to overcome the current political deadlock in the country, as well as the ongoing difficult economic and security situation, but rather will lead to further polarization, which produces more violence.

The rulings related to the Rabia al-Adawiya sit-in were a source of great support for the Muslim Brotherhood as it gained internal and external sympathy. As 683 people were sentenced to death on charges of breaking into al-Adwa police station in Minya after only two hearings, the public felt that the defendants were oppressed.

Laila Suef, a math professor in the faculty of sciences at Cairo University and a political activist, told Al-Monitor, “It is strange to prosecute Sultan or others and accuse them of treason, even though they invoked a right guaranteed by law, without prosecuting those who issued the law.”

“The real criminals are those who turned the Egyptian nationality to mere papers that do not provide citizens with rights protecting them from oppression and injustice,” she added.