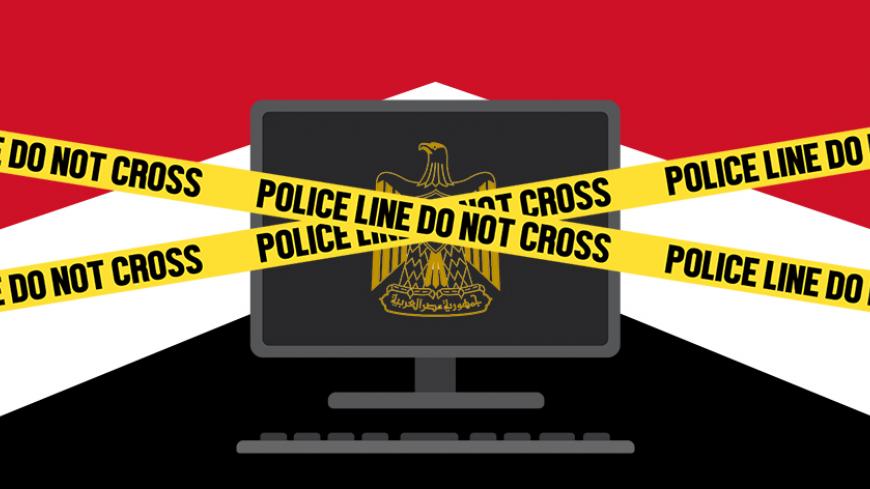 Among the banned websites is that of the Qatari-based Al Jazeera network, which Egypt has accused of carrying out a hostile media campaign against the country and of spreading Muslim Brotherhood propaganda. The move follows similar bans imposed on Qatar’s official websites by Saudi Arabia and the United Arab Emirates earlier in the week over “controversial” statements about Iran and Israel attributed to the Qatari ruler and published on the Qatari state-run news agency website.

The majority of the websites blocked by Egypt are pro-Muslim Brotherhood news sites and were either founded by members of the outlawed Islamist group or are funded by Qatar, with which Egypt is at odds over the Gulf state’s sympathetic views toward ousted Islamist President Mohammed Morsi.

However, at least one of the blocked websites — the privately owned Mada Masr news platform — is neither linked to Islamists nor sponsored by the “enemy” Gulf state. Mada Masr is an Egyptian independent news portal founded in mid-2013 by a group of liberal journalists who formerly worked for Egypt Independent, an English-language newspaper that closed in April 2013. In a statement released May 25, Mada Masr informed readers that they could access the website “through proxies and cached copies,” defiantly vowing “to continue to publish through existing platforms as well as our website.”

Shortly after the statement was released, Amro Ali, an assistant professor of sociology at the American University in Cairo, victoriously declared in a tweet, "Not to be outsmarted, Mada Masr publishes its articles on Google Drive. Regime Censorship: 0. Mada: 1.”

Lina Attalah, the co-founder of Mada Masr and editor-in-chief, told Al-Monitor, “The blockade took us by surprise, simply because it is not the norm. We are used to hearing about arrests and prosecution of journalists and closure of media outlets but not blockades.”

She said that Mada Masr management had not been informed prior to the move and that she had been “on the phone all day contacting the newly formed National Media Council and the National Telecommunication Regulatory Authority trying to get information from a primary source; we only heard we were on the list of banned websites from a secondary source.”

Her efforts left her even more frustrated, as “no one is taking responsibility for the action nor telling us why this has happened,” she complained. Attalah believes that the blockade was prompted by Mada Masr’s content over the last several months, which she said “has at times been critical of government policies and which must have embarrassed a few people out there.”

Mada Masr has in recent months published a number of investigative reports covering “sensitive” issues such as corruption within the government, repression and the military’s expanding business activities — topics that in the climate of fear and intimidation few other Egyptian media outlets have dared discuss.

“We simply state facts, but not everyone wants to hear them,” Attalah said.

And that precisely is the role of good journalism: disseminating facts and holding governments to account. But not so in Egypt, a country that ranks among the three worst jailers of journalists in the world (along with Turkey and China), according to a 2016 report by the New York-based Committee to Protect Journalists. A report published in November by the Cairo-based nongovernmental organization The Arabic Network for Human Rights Information claimed there were 63 journalists and media workers languishing behind bars in Egypt. The report cited dates of their arrests and the charges against them, saying that 58 out of the 63 were arrested as part of “a severe crackdown on journalists” following the overthrow of President Morsi in July 2013. Furthermore, Egypt has a very low ranking (159 out of 180) in the World Press Freedom Index released by Reporters Without Borders in April 2016.

In a much-publicized case, three journalists who worked for the English-language Al Jazeera news network were arrested on Dec. 29, 2013, and detained for more than two years on charges that included “belonging to a terrorist group” and “spreading false news.” The case provoked international uproar and harsh criticism from other governments and human rights groups after the journalists were given sentences of between 7 and 10 years. The sentences were slammed by the UN High Commissioner for Human Rights Navi Pillay as a “travesty of justice.” While all three have since been released — two of them were pardoned by President Abdel Fattah al-Sisi — the slogan “journalism is not a crime” from a virulent social media campaign calling for their release is still widely used today to express solidarity with other jailed journalists.

Meanwhile, in an unprecedented ruling, two Al Jazeera journalists were sentenced to death (in absentia) on June 18, 2016, for allegedly colluding with Morsi to pass state secrets to Qatar in the so-called Qatar espionage case. In April 2015, 13 journalists accused of belonging to an outlawed group and attempting to overthrow the regime in the “Rabia Operations Room” case (reference to a pro-Muslim Brotherhood sit-in staged at Rabia al-Adawiya Square in August 2013) were sentenced to life in prison and another was sentenced to death in the mass trial. Earlier this month, five of the defendants were acquitted in a retrial, while four others were sentenced to five years each. Mohamed Soltan, a dual US-Egyptian national who was among the 13 sentenced to life, was released in May 2015 and deported to the United States where he has since continued to campaign for the release of his colleagues.

The websites’ blockade has provoked an outcry from free speech advocates who called it “a clear attack on freedom of speech.” Yehia Kalash, the former head of the Journalists Syndicate, condemned the move as “unconstitutional” and “an attack on the rights of journalists and media workers.” He himself was fined and given a suspended two-year prison sentence along with two other syndicate board members in November on the charge of “harboring fugitives.” The charge stemmed from a police raid on the syndicate building in May 2016 to arrest two “wanted” journalists who had taken refuge there. Mahmoud El Sakka and Amr Badr, the journalists in question, had weeks earlier participated in protests condemning the handover of two Red Sea islands to Saudi Arabia. They were held in custody for four months on charges of “spreading false news” and “possessing fire arms.” Both have since been released, but last year’s raid on the syndicate set off a wave of angry protests by journalists who have since been at loggerheads with the Interior Ministry.

Members of the newly formed National Media Council, tasked with regulating the affairs of broadcast, print and digital media, could not be reached for comment on the recent blockades. Abdel Mohsen Salama, the current head of the Press Syndicate, meanwhile, took the opposite stance of his predecessor, justifying the ban.

“The banned websites posed a threat to national security as they support terrorism and incite violence,” he argued. He refused to comment on the banning of Mada Masr, however, saying only that “it is still uncertain if any Egyptian site has been blocked, as we have not received any complaints from the websites’ founders or administrators. If this is found to be true, we will take action to resolve the matter.”

But Mada Masr employees and readers remain unconvinced. “The government needs to come to terms with the fact that this is no longer the 1960s when state radio could broadcast propaganda and the public had no choice but to swallow it. This is the digital age: censorship is outdated and can be circumvented,” freelance journalist Aya Nader told Al-Monitor.