A journalist who had gone to Luxor to cover the recent unrest there was arrested on charges that included the spreading of fake news and belonging to a terrorist group. 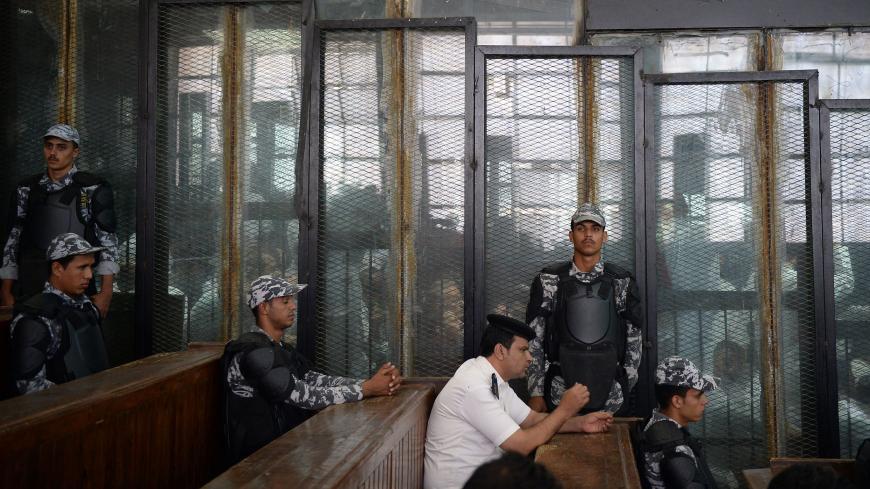 This picture shows the courtroom and soundproof glass dock (bottom) during the trial of 700 defendants including Egyptian photojournalist Mahmoud Abu Zeid, widely known as Shawkan, in the capital Cairo, on Sept. 8, 2018. - MOHAMED EL-SHAHED/AFP via Getty Images

When small, scattered protests calling for the resignation of President Abdel Fattah al-Sisi erupted in several Egyptian towns and villages on Sept. 20 and continued for several days, Egypt's largely pro-government media downplayed the unrest, painting it as a Muslim Brotherhood conspiracy to stir chaos and sow division in the country.

TV talk show host Amr Adib lambasted the Qatari-based Al Jazeera news network and other pro-Muslim Brotherhood channels broadcasting from Turkey and Qatar in an episode of his current affairs show "Al Hekaya" ("The Story") broadcast on the Saudi-owned MBC Masr Channel, for allegedly circulating a “fabricated" video of an anti-government protest in Giza's impoverished district of Nazlet Al Siman. The video in question was allegedly produced by the local United Production Company in its Cairo studios and uploaded to YouTube to demonstrate that those channels air videos without verifying their authenticity, Adib said. He called on Al Jazeera to apologize for the error it had made.

Amnesty International, meanwhile, reported that security forces had used "unlawful force" to break up the anti-government demonstrations, the majority of which were staged in low income communities to express economic grievances and protest the government's policy of demolishing unregistered buildings.

Quoting a coalition of Egyptian lawyers, the human rights watchdog said riot police had "used tear gas, batons, birdshot and on at least one occasion, live ammunition" to disperse the protests, which broke out on the anniversary of last year's protests against government corruption. Amnesty International also said, "Security forces killed two men while hundreds of protestors and bystanders were arrested on flawed terrorism and protest-related charges."

Not surprisingly, the protests, a rare show of defiance in a country where repressive policies have been used to silence dissent and where police brutality is common, failed to make headlines in the Egyptian press.

The protests went largely unreported, save for a handful of articles published by the few remaining independent Egyptian news sites like Mada Masr. The majority of citizens do not have access to these outlets as the portals are among hundreds of news sites blocked by the government since late 2016.

The Egyptian public would have been kept in the dark about the anti-government demonstrations had it not been for videos recorded and uploaded by activists from various protest sites and widely shared on social media.

One brave journalist has paid a heavy price for her bold defiance of the government's often covert censorship. Basma Mostafa, a freelance journalist who traveled to the southern city of Luxor Oct. 4 to report for the independent Al Manassa on the aftermath of the recent unrest, was ordered detained for 15 days pending investigation. She was arrested shortly after her arrival in Luxor for reporting on the killing of Luxor resident Oweis El Rawy during a police raid on the man's home.

The state prosecutors who ordered her detention accused her of spreading fake news, belonging to a terrorist group and abusing social media with the intent of disturbing public order. The second charge apparently relates to the Muslim Brotherhood, outlawed in Egypt since late 2013.

According to unconfirmed media accounts, El Rawy was allegedly shot and killed by security forces after he tried to defend his elderly father who had been physically assaulted by the police. El Rawy's death provoked outrage on social media with some activists drawing similarities between him and Mohamed Bouazizi, the street vendor whose death sparked the 2010 uprising in Tunisia.

The security forces also allegedly tear gassed El Rawy's funeral procession, further fueling anger in Awami, the village on the outskirts of Luxor where the incident took place. El Manassa reported that the journalist had been forcibly disappeared shortly after her arrival in Luxor on Oct. 4.

In a telephone conversation with one of her editors at 11:15 a.m. that day, Mostafa had said she was stopped by a police officer who had asked to see her national ID card. She also told the editor that she suspected she was being monitored by the police. The telephone call was the last communication with Mostafa before she went missing for several hours.

News of her disappearance sparked an outcry from activists and free speech advocates on social media, with some accusing the authorities of using such tactics to silence dissent. It was not until the following afternoon that Mostafa resurfaced at the prosecutor's office in Cairo.

Her husband Karim AbdelRady, a human rights lawyer who has been defending other detained journalists, told Al-Monitor that lawyers including himself were initially barred from entering the prosecutor's office. But he and Mostafa's lawyer, Hala Douma, were later allowed to attend the interrogation, which went on for more than five hours.

Mostafa was questioned about articles she had written including one on the alleged gang rape of a woman known in the media as the Fairmont Girl by perpetrators from affluent and influential families and another on the killing of Islam Al Australy, a young suspect who was allegedly tortured to death at El Munib police station in September, AbdelRady said.

"It is clear that my wife was targeted for her work, which has ruffled the feathers of the authorities," he told Al-Monitor. "The prosecutors brought up every single story Basma has written including one dating back to 2016 on the murder of Italian student Giulio Regeni," he said, in reference to the Cambridge University postgraduate student who had been researching independent trade unions, a touchy subject for the authorities, in Egypt before his corpse was found in a ditch in early January 2016 showing signs of torture.

In an abrupt turnabout, the public prosecution announced in the early hours of Oct. 6 that Mostafa would be released. It said in a statement, "The public prosecutor has ordered the release of the accused, Basma Mostafa, following an investigation of the charges levelled against her including misusing one of her social media accounts to publish and disseminate false news with the purpose of fomenting instability. The suspect has denied the accusations, affirming that she writes investigative reports for various news sites, focusing mainly on social and topical issues of interest to the public such as the situation in the country in the wake of the outbreak of the COVID-19 pandemic. The public prosecution tried to access the aforementioned social media account but found that it had been deactivated for unknown reasons. The investigations will continue."

AbdelRady believes the immense pressure piled on the authorities by rights groups and free expression advocates prompted her release.

Mostafa's detention and sudden release raised eyebrows in Egypt, with some rights advocates like Gamal Eid, a human rights lawyer and founder of the Cairo-based Arab Network for Human Rights Information, asking on Facebook why a journalist would face accusations of spreading false news over an article that has yet to be published.

"The authorities are using public prosecutors and judges to terrorize journalists and send a chilling message to intimidate and silence the press," Eid told Al-Monitor. "Basma did not commit a crime; she was merely trying to do her work as a journalist. The fact that she was arrested can only mean that there is no longer a space for independent voices. Only government cheerleaders are allowed to express their views in the propagandist media," he said.

According to both Eid and AbdelRady, no fewer than five journalists have been arrested since the protests broke out in September and hundreds have been arbitrarily detained. The arrests signal an intensifying crackdown on dissent in place since the ouster of Muslim Brotherhood President Mohammed Morsi and in the wake of a June decision by Egypt's Supreme Council for Media Regulation to restrict coverage of sensitive political, economic and health issues, including the situation in Libya, military operations in Sinai and Ethiopia's Grand Renaissance Dam. Under the rules, journalists can only quote government officials or use government statements when reporting on those issues. Egypt continues to rank among the world's top jailers of journalists, according to a 2019 report by the Committee to Protect Journalists, with at least 60 journalists believed to languish behind bars.

Founder and editor of the independent news site Daarb Khaled El Balshy, who is a former head of the Press Freedom Committee at the Journalists' Syndicate, told Al-Monitor, "The tiny space that was available for free expression is shrinking even further. Even journalists from news sites like El Manassa and Daarb, which are blocked and are inaccessible to the majority of Egyptian readers, are arrested. On Sept. 9, Daarb journalist Islam El Kalhy was arrested while reporting on the killing of Islam Al Australy, a suspect killed while in police custody. El Kalhy remains behind bars to this day.”

Like Mostafa, El Kalhy was charged with spreading false news even though his article was never published. He has remained in pretrial custody as prosecutors have twice renewed his detention order.

"The arrests send a message of zero tolerance not just for dissent but for any kind of ethical journalism in today's Egypt," El Balshy said.