With the US presidential election just weeks away, Egyptian media outlets loyal to the government have dragged the controversy over former Secretary of State Hillary Clinton's emails back into the headlines. 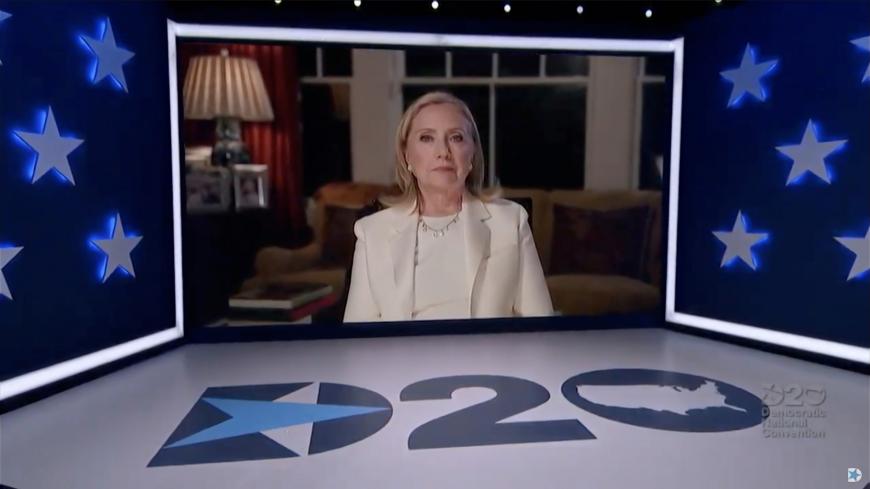 In this screenshot from the DNCC’s livestream of the 2020 Democratic National Convention, former first lady and Secretary of State Hillary Clinton addresses the virtual convention on Aug. 19, 2020. - DNCC via Getty Images

With US President Donald Trump trailing the Democratic presidential nominee in the polls, Cairo is contemplating the prospects of a Joe Biden electoral victory .

Biden, a former vice president under Barack Obama, has already made clear there would be “no more blank checks” for Trump's “favorite dictator,” as Trump had called Egyptian President Abdel Fattah al-Sisi at the G-7 summit in France back in 2017.

Unlike Trump, who has largely turned a blind eye to human rights violations in the region, except in Iran,  Biden has tweeted that human rights would be “at the core of our engagement” and that “nations that violate the human rights of their citizens would be held accountable.”

Biden has also criticized Egypt's crackdown on activists and human rights defenders. In a comment published via his official Twitter account in mid-July, he stated, “Arresting, torturing, and exiling activists like Sarah Hegazy and Mohamed Soltan or threatening their families is unacceptable.”

Hegazy, an LGBTQ rights activist who was detained and tortured after raising a rainbow flag at a Mashrou' Leila concert in Cairo in September 2017, committed suicide in June, apparently as a result of her suffering post-traumatic stress disorder due to her incarceration.

Soltan, a dual Egyptian-American national and former political prisoner in Egypt, has seen several of his relatives, including his father, detained in recent months. The arrests and detentions came after he filed a legal complaint against Egypt's former Prime Minister Hazem Beblawi in June, accusing him of overseeing his alleged torture while in prison.

Soltan is not the only human rights defender to suffer reprisals for his dissent. The latest case is that of Khaled el-Balshy, editor-in-chief of the independent Daarb news site — which is among hundreds of news sites blocked in Egypt — whose brother Kamal was arrested Sept. 20 in retaliation for Balshy's critical journalism, according to the Committee for the Protection of Journalists.

Human Rights Watch researcher Amr Magdi told Al-Monitor by email that Sisi and other Arab leaders believe that if Trump wins, they win.

“This is not just evident in their warm welcoming words for Trump but also in financing his [previous election] campaign according to some media reports,” he said in reference to recent news reports of an investigation by US federal prosecutors into whether a state-owned Egyptian bank had pumped $10 billion into Trump's 2016 election campaign. The inconclusive probe went on three years before ending this summer.

“Threatened by the 2011 Arab Spring pro-democracy movement, Arab autocrats have sought to reverse the small, democratic gains of the uprisings in their countries,” Magdi lamented.

Magdi, however, does not expect any dramatic changes in US policy toward Egypt and the region if Biden becomes president.

“We know from the Obama era that US foreign policy vis-à-vis the Middle East was not so different” from the policy of the current US administration, he said.

Hisham Kassem, an analyst and former publisher of al-Masry al-Youm, also expressed doubt that a change in US administration would spell any real change in US Egypt policy.

“There would likely be fewer official visits between Egypt and the US and Biden may use tougher language to condemn rights abuses,” he told Al-Monitor. “But a Biden administration will, like all previous US governments, only care about safeguarding America's interests, namely the prioritization of US naval vessels through the Suez Canal and access to Egyptian airspace for US military aircraft; no American president will want to jeopardize US relations with Egypt,” he added.

Egypt's largely pro-government media has meanwhile made it crystal clear that the state has chosen to side with Trump. In recent days, the Egyptian press has brought Former Secretary of State Hilary Clinton's email controversy back in the spotlight. Various news sites, including state-owned Akhbar el-Youm and privately owned sites like Youm7 and others, published what they claim are “recently declassified emails” that serve as evidence of the Obama administration's alleged support for the Muslim Brotherhood, the Islamic group designated by Egypt as a terrorist organization in late 2013.

They also accuse the former US administration of “using the Qatar-based Al Jazeera news network to spread chaos in the region.” The anti-Clinton campaign is apparently intended to turn Egyptian public opinion against Biden as another former Obama administration official.

The privately owned Sada el-Balad claimed that a leaked Clinton email revealed that she visited Qatar in 2010 and met with Al Jazeera's then-director Wadah Khanfar and with the channel's board members. The authorities perceive the Arabic-language Al Jazeera channel as being biased in favor of the Muslim Brotherhood and its websites are blocked in Egypt.

Referencing another “declassified Clinton email” dated Jan. 29, 2011, and which allegedly was sent from an Al Jazeera Blackberry, the news site claimed the sender had congratulated an Obama administration official on Obama's “principled stance on Egypt.”

Obama had expressed support for the Tahrir Square protesters demanding the ouster of the Hosni Mubarak regime during the 2011 uprising. Sada El Balad interpreted the email as “part of a conspiracy to destabilize Egypt and the region,” an idea propagated by other news sites and TV talk show hosts like MBC’s Amr Adib.

The English-language news site Egypt Today stated that Clinton’s emails serve as “a reminder of a US policy that favored the Muslim Brotherhood at the expense of the Egyptian people.” In another article lambasting Cliton, it claimed that another leaked email had revealed “Clinton’s cooperation with Yemeni activist Tawakol Karman,” a staunch Muslim Brotherhood supporter who has described the overthrow of President Mohammed Morsi by military-backed protests as “undemocratic.”

The articles did not specify when the alleged emails were released but the timing of the attacks on Clinton, just a few short weeks before the US election, may possibly be an attempt by some media outlets to deceive readers into thinking that the information provided in those purported emails is new. Mohamed Abul Ghar, former head of Egypt's liberal Social Democratic Party, dismissed the assaults on Clinton as “outrageous” and “an attempt to appease the government.”

Abul Ghar told Al-Monitor, “Much of the information cited as being from declassified emails is in fact bits and pieces from a batch of emails leaked in 2016 and which have been taken out of context by the media to mislead the Egyptian public. But Egyptians aren't the ones voting in the US presidential election, so who cares if the Egyptian media prefers one candidate over the other?”

Contrary to the erroneous Egyptian press reports, there are no newly leaked emails from Clinton's private server. US Secretary of State Mike Pompeo has in fact faced criticism from Trump over his failure to recover and release more of Clinton's emails ahead of the November election.

The Clinton email controversy dates back to the days when she served as secretary of state in the Obama administration. Clinton had used a private email server for official communications instead of the more secure State Department email accounts, a choice denounced by some members of Congress as a violation of federal law. A federal investigation that lasted several years and ended in 2019 found no deliberate mishandling of classified information, according to The Guardian.

While Clinton did acknowledge her mistake, she defended her action in a March 2015 press conference, saying she had gone “above and beyond disclosing all work-related correspondence.” She reportedly handed the State Department more than 55,000 pages of emails but deleted thousands of others on grounds they were personal. Trump has lately been pushing for the release of those emails, hoping to use them as fodder against Biden.

Meanwhile, officials are contemplating the way forward for Egypt and the region in a post-Trump era. Nabil Fahmy, a former Egyptian ambassador to the United States, told Al-Monitor, “As a global power, the US will always have an interest in the Middle East even as it pivots elsewhere. Greater self-dependence is warranted in the Middle East; Arab countries will need to manage their relations with the US efficiently but at the same time, ensure strong relations with multiple major powers so as to be able to fulfill their interests. This is crucial regardless of whether Trump or Biden is elected.”